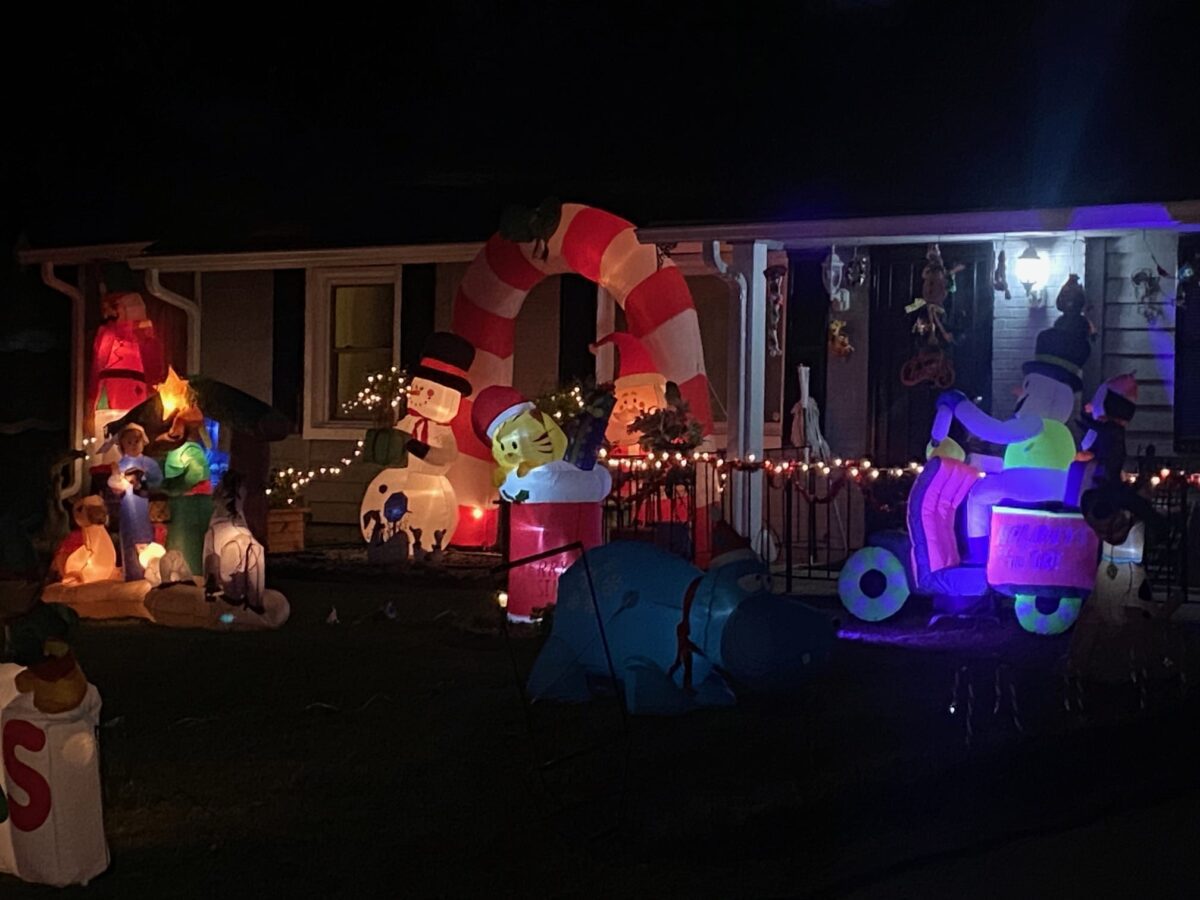 Ed. note: The people in this story are my neighbors. — RK

A Forest Park family known for its annual Christmas yard display says they’re angry and hurt after someone damaged a sign they were awarded for Yard of the Quarter.

Sonya Robinson, 48; her mother Sandra Mitchell, 67; and her severely disabled adult son Joe, 29, have lived on Glenn Drive for 21 years and have never had a problem with anyone.

Early Monday morning, sometime between 1 a.m. and 7 a.m., Robinson said, someone kicked in the Ward 4 Yard of the Quarter sign the family had been awarded for their impeccably-manicured front lawn.

“So when I woke up this morning, I looked out, and one of my signs over there, it was damaged, it was bent all the way back, one of the stakes was out, and it was leaning on my flowerpot,” Robinson said Monday night. “I looked at the beautiful (Yard of the Month) sign, and they had kicked it, and that’s why it’s leaning like that…and I took my other signs up.”

Robinson put the Yard of the Quarter sign behind some lawn furniture on her porch. She says she did not report the damage to police “because I had to go to work.”

“So as of 8 o’clock tonight, all of this will be taken down.” She pointed to the Christmas inflatables filling her front yard.

“It’s too much money,” she said. “One apple spoiled it for everybody.”

Robinson said the family had spent about $250 on this year’s additions to the winter wonderland, which brings holiday joy to the neighborhood of Forest Park Estates each year. Multiply that by 21 years and that’s a lot invested.

She’s afraid that, if she leaves up the blow-up ornaments, the vandal might cut them up, “and that’s a lot of money.”

Setting up the display is always a multi-day event. “It took us about five hours Saturday,” Robinson said, “and we worked out here about two hours yesterday. Actually, we wasn’t finished, but we are now.”

Neighbor Jody Jackson, a union-trained carpenter who helps the Robinsons and usually stands guard on the corner at night as an unofficial neighborhood watchman, helps the family put up the display each year. He also does a lot of the yard work and other odd jobs and was still sore from the effort of crawling around the attic, getting down the boxes of decorations, and putting them up outside. That night, he didn’t feel well enough to stand watch.

For that, Jackson says, he feels guilty.

But a man who works with his hands all week can only do so much.

“Saturday, I stayed out here pretty late to look out for stuff,” Jackson said. “Saturday, I don’t know, two, three o’clock in the morning, I finally laid down and I didn’t get back up until Sunday morning. About noon, she came by wanting me to cut some stakes, put some more lights in the yard, I told her, ‘Give me a little while and I’ll be back up there.’…I didn’t wake back up until this morning (Monday)….She had came by, told me they had damaged some stuff, and said she wanted to take it down today. I told her, ‘don’t, don’t, don’t.’ I tried to convince her a while ago. I couldn’t do no good.”

Ward 4 Councilwoman Latresa Akins-Wells, who had chosen the family for the Yard of the Month honor, came by Tuesday morning to pick up the damaged sign. She said she thinks it has to do with someone who doesn’t like her.

“I hate for someone to do that to her because of my sign,” Akins-Wells said as Mitchell’s van pulled into the driveway. “Every Yard of the Quarter, that’s what they do. The guy over on Pineridge (Drive) got it, it was around election time. So he had this sign out and he had my yard (campaign) sign, and they came and told him he couldn’t have those signs in the yard.”

Mitchell’s eyes showed deep pain. She said Robinson told her, “Oh, you’re just in your feelings today.’ And I was. I was hurt.”

She turned and went inside.

The pride in being recognized for keeping their yard shipshape and the joy of the annual holiday light show have been ruined for this family. They have endured much hardship over the years yet made it their mission to bring happiness to others. Robinson, usually a cheerful and friendly neighbor, almost lost her own life a couple of years ago after an extended hospital stay.

“I was pissed off,” Robinson said. “I really was. I was mad. Because, like, we do it for the kids in the neighborhood, and this is what you get? So, you know, somebody destroy your property?”

Now the family, which is not rich, is paying to put in a fence and security cameras this holiday season.

Akins-Wells said, “You would think the community would come together instead of doing stupid things like that.”

Robinson has a message for the unidentified vandal.

“To the individual who destroyed the signs in my yard, I hope the good Lord bless you, because if you got something taken away from kids, what we do for kids every year, may the good Lord bless you because it’s ridiculous. And hopefully, you will learn from your mistakes. You just can’t go around doing criminal items, tearing people’s stuff up. People work too hard. And like I said, we do this for the kids. But you know, if the devil is in you and you’re an unhappy person, I’m sorry. Maybe you need to look at it and you might find some joy. I don’t know.”

Anyone with information about this incident should contact the Forest Park Police Department at (404) 366-7280.