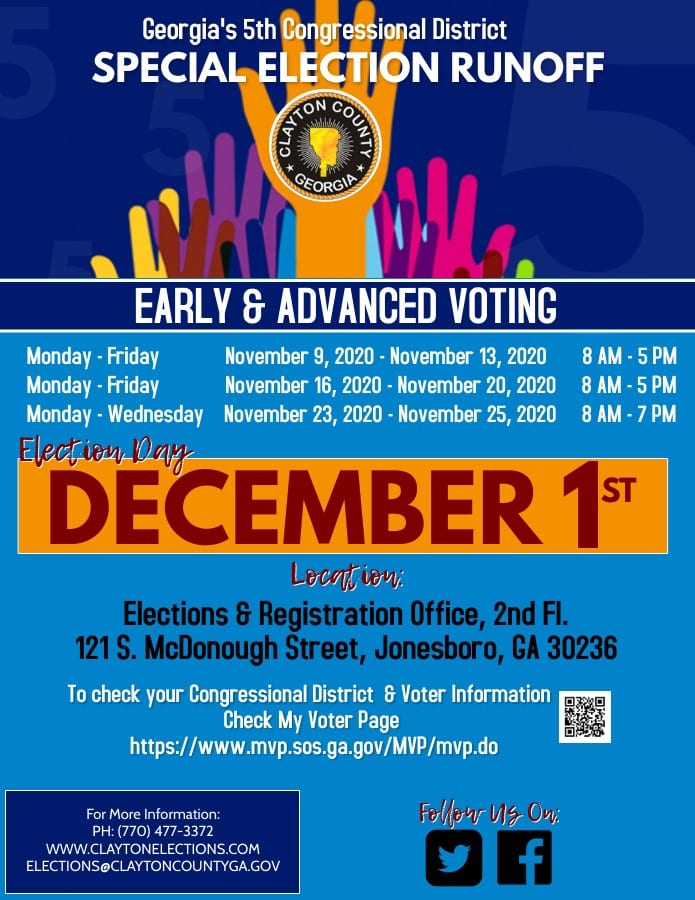 Clayton County voters will return to the polls between now and December 1 to choose a successor to finish out the last month of the late Rep. John Lewis’ final term in Congress.

The winner will serve for about a month until the new Congress is seated in January 2021.

As of Thursday, November 12, the latest day for which figures are available from the Clayton County Board of Elections and Registration, 2,113 people had filed absentee ballot applications for the race–and only eight ballots had been cast.

The Elections office, which has had to throw its staff into the Presidential recount effort since the last update, also is preparing for two crucial Senate runoffs on January 5 that could determine whether Congress turns blue.

One Senate race is between incumbent Sen. Kelly Loeffler, who was appointed by Gov. Brian Kemp, and Rev. Raphael Warnock of Ebenezer Baptist Church.

The other is between incumbent Sen. David Perdue and independent producer Jon Ossoff.

You can check your registration status, request an absentee ballot, and check your polling place at mvp.sos.ga.gov. You also can pick up an application for an absentee ballot in person at the Elections office in the Historic Courthouse, 121 S. McDonough St., Jonesboro. Enter the rear of the building and someone will direct you to the office.

If you plan to vote by absentee ballot, you may want to use the county’s official ballot boxes to avoid any post office delays.