GOP field office in Morrow appears to have shut down 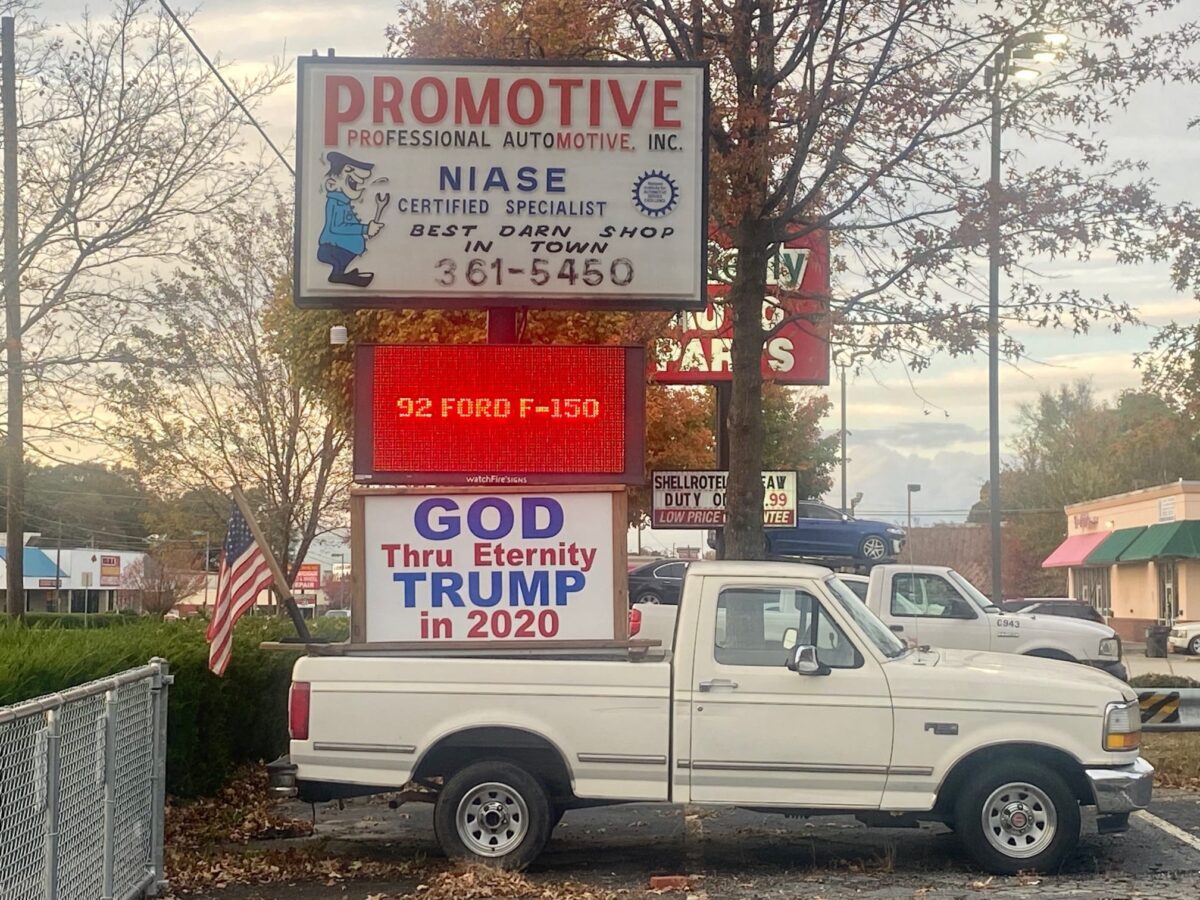 The Clayton Crescent went to the GOP field office in Morrow (not pictured above) for reaction to the news that Democrats Joe Biden and Kamala Harris had won the 2020 race for the White House.

The office appeared to have been vacated. No one answered the doorbell or knocks. On the walls hung two flags: the State of Georgia and the United States Marine Corps. A half-empty, half-full glass dish of peppermints was centered on the receptionist’s counter.

The Clayton Crescent had called two GOP party members previously contacted at that office before the election. Both had sounded tired and less than enthusiastic.

The Clayton Crescent drove around Clayton County and posted requests to social media for local Trump supporters to share their thoughts about the election. No one responded and no one was seen in the county waving Trump signs or banners.

We later learned of a pro-Trump demonstration at the Georgia State Capitol and drove to Atlanta to speak to Trump supporters there.

The only thing we saw at the Gold Dome shortly after sunset were police barricades (instead of the usual fence) and two Georgia State Patrol cars–one parked on the first landing of the stairs leading up to the Capitol on Courtland Street, another parked on the side of the Capitol on Mitchell Street, which also was barricaded. Neither Trump nor Biden supporters were present.

Earlier in the day, Trump supporters had been urged to gather at their state capitols to protest in a nationally-coordinated series of “Stop the Steal” rallies. No evidence has been offered to date to back GOP claims of alleged absentee ballot fraud in Clayton County and no lawsuit had been filed on behalf of the GOP or Trump campaign in Clayton County Superior Court as of Sunday, Nov. 8. Georgia GOP Chair David Shafer had said the party would be filing suit in a dozen counties after announcing a suit in Camden County. A judge threw out the case, saying the plaintiffs failed to show that 53 ballots had been received after 7 p.m. on Election Day.

About 80 people waved American flags and Trump banners in front of the Gold Dome on Saturday afternoon and cheered a Trump bus as it passed by:

Here’s what other local media saw:

Some Trump supporters on Facebook said they were moving their social media presence to Parler, Nap-Sack, and Gab, citing Facebook content warnings that they said censored their views:

While Facebook has plenty of issues with clumsy content moderation, Parler, like Facebook, engages in content moderation by “community jury” that some users might see as censorship. Nap-Sack is run by Marc Chinama, who on Facebook has repeated several disproven allegations of ballot fraud that the Trump campaign has made in recent days. Gab is where users of 8chan, purveyors of “shitposts” and white-nationalist memes, resettled after founder Frederick Brennan shut it down (owner Jim Watkins runs 8chan from the Philippines). All three sites say they are proponents of free speech and the exchange of ideas.

“Shenanigans began in Clayton County many years ago,” Ashley said. “Nearly every Secretary of State and GAGOP chair has turned a blind eye to the activities in our county. It wasn’t until THIS YEAR when the Trump Campaign pushed for a regional campaign office in our county that anyone remembered we actually needed help. And just these few months have gained us just as many percentage points here. Imagine if I had the help I’d asked for before the Five Star Program was in full swing, before the pandemic? Imagine if Clayton County had been pushed to a mere 80% Democrat turnout instead of 84%? Sorry, y’all. It’s too little, too late. I asked for help. You didn’t deliver. Your unhealthy fixation on GA-6 cost Trump the election. Will you try to help us swing Democrats in the future, or is that above you?”

Becky E. Hites, the Republican candidate in House District 13 who ran against Congressman David Scott, agreed, saying that the state had invested too much in Karen Handel’s failed run against Rep. Lucy McBath in House District 6:

“They sucked up all the resources in Cobb for sure (money, people, public attention) where in district 13s small portion of the county the Dems increased their turnout by 38% or 60K votes. There were too many times to count where we were both in the room and she got called out and they completely ignored our race. The GA GOP is culpable in our loss and it cannot be allowed to continue.”

Hites praised Ashley for having increased Republican voter turnout in Clayton County: “Congratulations Garrett. Of our 6 counties, Clayton was the only one to turn out double digit gains over 2016 in the number of votes for our president. For sure, we still didn’t get the support required and we’re strongly making that case now so we’ll be better prepared for 2022.”

This year, 15,671 people, or 14.11 percent of those who cast ballots in the November 3 election, voted for Donald Trump in Clayton County, according to election returns filed with the Georgia Secretary of State. Clayton County had a lower overall voter turnout percentage-wise at 57.64% but that percentage is of 193,814 registered voters in the county–an increase of 59,650 new voters.

If you are a Republican voter in Clayton County, we would like to hear from you. What are your concerns for the country and for Clayton County following this election? What were you doing when you heard the election had been called for Biden/Harris? Did you support Trump or Biden, and if you voted for Biden, why did you cross parties? E-mail KempWrites@gmail.com, send us a comment in the News Tip box, or hit us up on Facebook.