Who is a poll observer? 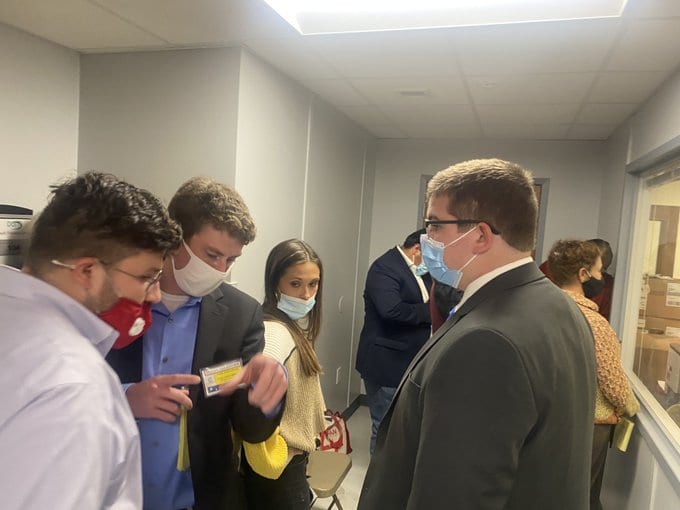 UPDATE 10:19 p.m. Nov. 7: Clayton County Elections Board member Pat Pullar said the GOP observers were brought in as a group from Macon. She also said they were required to have badges.

Georgia has specific rules about who can observe elections and vote tabulation. Those rules provide for a certain number of observers, who are supposed to wear identification badges issued by the county elections office.

On November 5 and into the early hours of November 6, when Clayton County Elections and Registration officials were counting absentee ballots, more than a dozen observers from the Republican Party, as well as at least one attorney from a national GOP group who said he was also with the Trump campaign, piled into two small viewing areas in the building where votes were being counted. Only one of them wore what appeared to be a county-issued identification badge.

The Clayton Crescent has asked Elections Supervisor Shauna Dozier and Elections Board member Pat Pullar whether the numbers of observers and the fact that they were unidentified by county-issued observer badges was a violation of state elections rules.

At 9 a.m. on November 5, when the count resumed from the previous day, two empty folding chairs sat within a designated observation area in the “duplication room,” an area where five teams of three elections workers read off and copied onto a clean ballot each voter’s choices, a process that took almost three minutes per ballot.

Before noon, one unidentified observer told the badged observer that he thought “commingling” of ballots was happening in an adjoining room.

“Well, if you think you saw something, call somebody,” the badged worker advised.

Minutes later, two men in suits arrived. One told the observers he was with the Trump campaign and later identified himself to The Clayton Crescent and Aftenposten reporters as Manuel Iglesias of the Republican National Lawyers Committee.

Iglesias, a corporate and health attorney from Miami who has been “heavily involved with the Republican Party since 1972,” did not say that he is chair of that organization. According to his bio, Iglesias graduated from Georgetown and the University of Chicago and holds degrees in foreign service, law, and business. He “focuses his practice on the representation of healthcare related entities and physician groups in business transactions, including buy-sell agreements, mergers and acquisitions, non-compete contracts, employment and vendor agreements and asset protection” and has “more than 25 years of experience in the business world with management consulting, venture capital and investment banking firms. He has also served as an officer and/or director for various investment banks and venture funds.”

In addition, Iglesias has served on the Reagan and Bush presidential transition teams in 1980 and 1988, and was involved with the 2002 Bush-Brogan gubernatorial campaign in Texas, and chaired Lawyers for Bush-Cheney Coalition for Miami-Dade and Monroe Counties for George W. Bush in 2004.

Iglesias is a major investor in and executive of biotech and healthcare companies, like Organicell and Hygea Holdings Corporation, as well as other businesses over the years.

Iglesias, a Cuban-American exile, also serves on the board of trustees of a Falls Church, VA-based group called Center for a Free Cuba.

While Iglesias did not have a county-issued poll watcher badge, he did take an active interest in the proceedings in Clayton County.

When the count was suspended Thursday for lunch, Christina Pletten of the Norwegian news group Aftenposten and Robin Kemp of The Clayton Crescent asked Iglesias for details of what he alleged were improprieties with the count:

Manuel Iglesias, a Cuban-American attorney who said he was with the Trump campaign and who is a major player in the GOP, alleged irregularities in the Clayton County, GA count on Nov. 5, 2020 but would not provide evidence to support his claim. Video: Robin Kemp, claytoncrescent.org

After Iglesias arrived and the count resumed, more unidentified observers with the GOP team began trickling into “The Bunker” in twos and threes. Later that night, one who had been coming in and out of the building rushed in, followed by at least half a dozen other unidentified people, shouting, “Team A! You’re here! Team B! You’re in there!” He directed half of the newcomers to stand in a small hallway before a glass window where ballots were being brought in in bins, inspected, counted, and scanned into the state’s Dominion-branded election system. The other half took up their posts in a small taped-off observation area in the duplication room, a spot with room for two socially-distanced folding chairs for observers, including the press. At times, observers packed the space to the point that officials told them to get back behind the blue-tape line on the carpet or to stop leaning over a table where two Clayton County Police officers sat next to stacks of blank count-related forms.

The demeanor of the unidentified observers involved pacing back and forth, sometimes in shifts, between one room and the other; standing and staring across the room where people were counting; packing available spaces well beyond social-distancing measures while wearing masks improperly or not at all; and complaining about a cardboard box for one of the envelope-opening machines being stored behind the folding chairs in the observation room while piling personal belongings and shared snack caches in the vestibule and narrow hallway between the two counting rooms.

Throughout the day and night, The Clayton Crescent documented each of the unidentified observers and posted their photos to Twitter. One attempted to place his hand over the reporter’s cell phone while being photographed. Here are some of those photos:

What brought such an intense interest–and aggressive display– in what was happening in Clayton County?

As a battleground state on the verge of flipping blue, Georgia was under intense national and international scrutiny. Clayton was one of the last major counties to complete its tally. It also is over 70 percent Democratic and was never likely to provide a Republican victory in the Presidential contest.

As it turned out in other parts of the state and country, GOP tally watchers apparently had deployed a strategy of publicly alleging fraudulent counts without getting into specific evidence to support their claims.

Why devote so many resources to poll watching in a county that is overwhelmingly Democratic, where there was no statistical likelihood of a close race between Donald Trump and Joe Biden?

According to the sole Democratic observer we met — another attorney, who also was unidentified, although she claimed to have a county-issued badge in her pocket –“They’re trying to create a narrative.”

By claiming that Democrats were the only ones to tally ballots in a Democratic-majority county, campaign officials could take their allegations public without bothering to substantiate them in a court of law.

Iglesias’ visit to The Bunker, along with the obviously coordinated deployment of unidentified poll watchers, was just one example of how powerful national party and campaign officials can bring that power to bear on a nondescript county building where county elections employees, sworn to count ballots honestly, methodically plodded away at the dull, repetitive, unglamorous work of ensuring democracy.