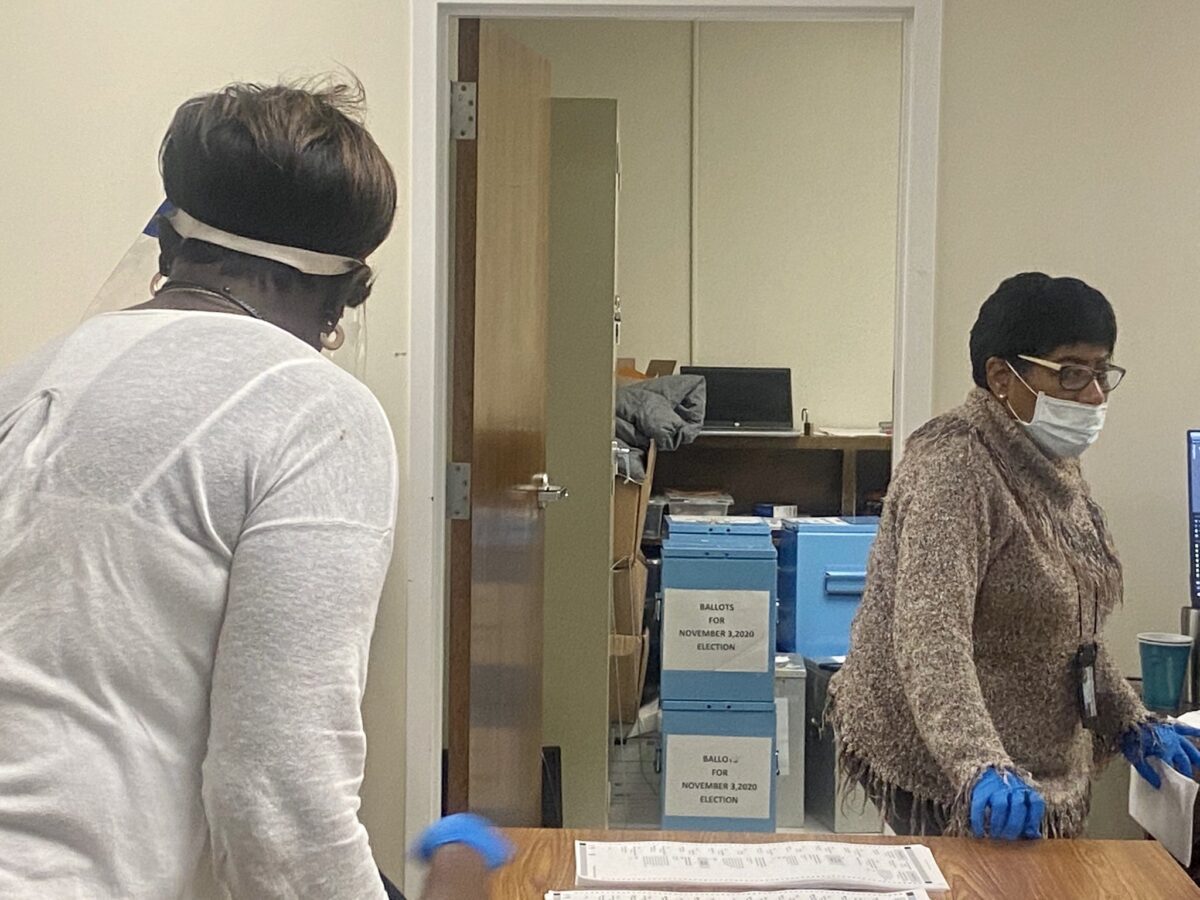 In a low-profile concrete building nicknamed “The Bunker,” about two dozen Clayton County Elections and Registration employees methodically sorted ballots as the rest of the nation and people in other countries watched the battle over Georgia’s electoral votes and the Presidency.

Observers from the Republican Party and the Trump campaign, most of them young and from out of town, paced nervously through the building as the count progressed and called in reinforcements as the day passed into night and into the next morning.

The observers made various claims about what they believed were improprieties during the count, such as removing the tear strip from the tops of paper ballots before feeding those into scanners connected to the state elections computer system, or what they believed was “commingling” when some ballots were brought from an adjoining room and placed in bins where the count was taking place. The Clayton Crescent saw no signs of improper ballot handling.

Both the GOP observers and The Clayton Crescent made repeated requests for an update, via a Clayton County Police officer on duty, for Elections Superintendent Shauna Dozier to provide answers to basic questions, such as how many ballots had been or would need to be adjudicated, or an estimated timeframe for finishing the count. Dozier did not reply to The Clayton Crescent nor to most of the GOP’s questions, leading to speculation from a Democratic observer that county elections officials might have been trying to avoid large crowds of Trump’s supporters attempting to enter the facility. This has happened in several other cities as the ballots were being counted.

The Republican observers’ biggest complaint, they said, was that they could not see signature verifications that they said were taking place at a table across the room from the marked observation area. The Clayton Crescent could not verify whether what was happening across the duplication room was signature verification or whether that process had taken place elsewhere.

Around noon Thursday, when the count halted for a 1.5-hour lunch break, Manuel Iglesias of the Republican National Lawyers Association held an impromptu press conference, where The Clayton Crescent and Aftenposten, a Norwegian news outlet, asked Iglesias to specify what alleged improprieties the Republican teams said they had observed:

At one point during the count, a young woman wearing black who was with the GOP contingent told colleagues, “They’re about to throw me out of here,” then walked into the duplication room where counting was in progress, shooting cellphone video. An employee said, “No, ma’am, you can’t do that, you can’t do that,” and tugged at her sleeve as a Clayton County Police officer moved the woman out of the room. The woman then ran to a door on the other side and shot more video before she was told to leave the building. She did not come back in until the wee hours of the morning when the count was almost done.

The woman in black said, “I’m about to get kicked out,” began shooting video through one door, apprehended by worker/cop, then ran to other door and shot more video. Still here hours later. pic.twitter.com/wUDoKqufq7

When the counting resumed, more observers arrived in ones, twos, and threes, filling the available space and sometimes stepping over the blue line taped off for observers to watch the count. Eventually, there were a dozen GOP observers filling the two observation areas, with another several outside at any given time. One complained about a cardboard box in the observation area; a CCPD officer removed it. Others piled their bags and snacks in the hallway.

One observer told another, “Just having this many people deters these kinds of things.” What exactly those things were, members of the GOP contingent were reluctant to specify.

The Elections Office employees doing the counting were nearly all African-American women. The observers were nearly all white men. The women doing the counting, many of whom had gray hair, occasionally stretched sore backs or wiggled stiff fingers, but were focused on the task before them, not the rotating cast of young people with padfolios. None of the observers said they were from Clayton County. One was from Fayette. Others lived in Atlanta. Some were from out of town or had attended college out of state. All made different claims about what they believed was improper ballot handling.

Only The Clayton Crescent was there for the entire process Thursday. The Aftenposten journalists showed up shortly before lunch, then returned for an interview with Pat Pullar, former Clayton County Democratic Party chair and member of the Clayton County Board of Elections, about voter turnout. Pullar said Democratic turnout in Clayton County had been lower than expected and urged voters to return to the polls and cast ballots in the December runoffs:

As the evening progressed, Dozier brought in additional boxes of ballots to be counted. This upset the GOP observers, who complained that Dozier would not answer their direct questions about the chain of custody. Georgia elections law forbids observers from speaking to, distracting, or harassing election workers involved in the count.

But not talking to reporters right here pic.twitter.com/nREp0ILyEk

Because Dozier was directly handling ballots, this is likely why she refused to speak to observers, The Clayton Crescent, and local TV news crews that arrived in the wee hours of Friday morning. However, Dozier did go on CNN twice to give updates on the number of ballots left to be counted and said the count would continue all night until it was complete.

The woman in black said, “I’m about to get kicked out,” began shooting video through one door, apprehended by worker/cop, then ran to other door and shot more video. Still here hours later. pic.twitter.com/wUDoKqufq7

Local reporters had to rely on the infrequently-updated counts uploaded to the Secretary of State’s online election results system, alerting each other to “another dump” whenever a new stack of ballots was scanned in, checking the website to see whether the counts had changed, and scribbling calculations on notepads.

Lacking a live truck, The Clayton Crescent’s Robin Kemp occasionally uses Facebook Live for breaking news updates. She began posting lives throughout the day, cross-posting some to Twitter, and documenting the proceedings by uploading photos to Twitter, as well. In the bunker and documenting events, she was not aware at first that the count in Georgia had become the focus of international attention. Then her Twitter feed blew up.

Today, @RKempNewsDaily showed the world why local news matters. She spent 20 straight hours witnessing the vote count in Clayton County. Y’all rewarded her by raising $10k after one of you found an old Gofundme link for her outlet. When I told her, I thought she might cry❤️

Standing next to @RKempNewsDaily as she sees the support she’s getting on her gofundme! She’s been covering the Clayton County vote since yesterday. Support local journalism. pic.twitter.com/jIN3fb0Vfk

Finally, just after 4 a.m. Friday, Joe Biden had taken the lead in Georgia with 917 votes and 87 percent of ballots cast in Clayton County:

On Friday, state elections officials announced there would be a runoff in Georgia, which state law allows whenever two candidates are within 0.5% of each other in a race. Friday is also the deadline for curing ballots and receiving military and overseas ballots.

We’ll have an update on the election later this evening.