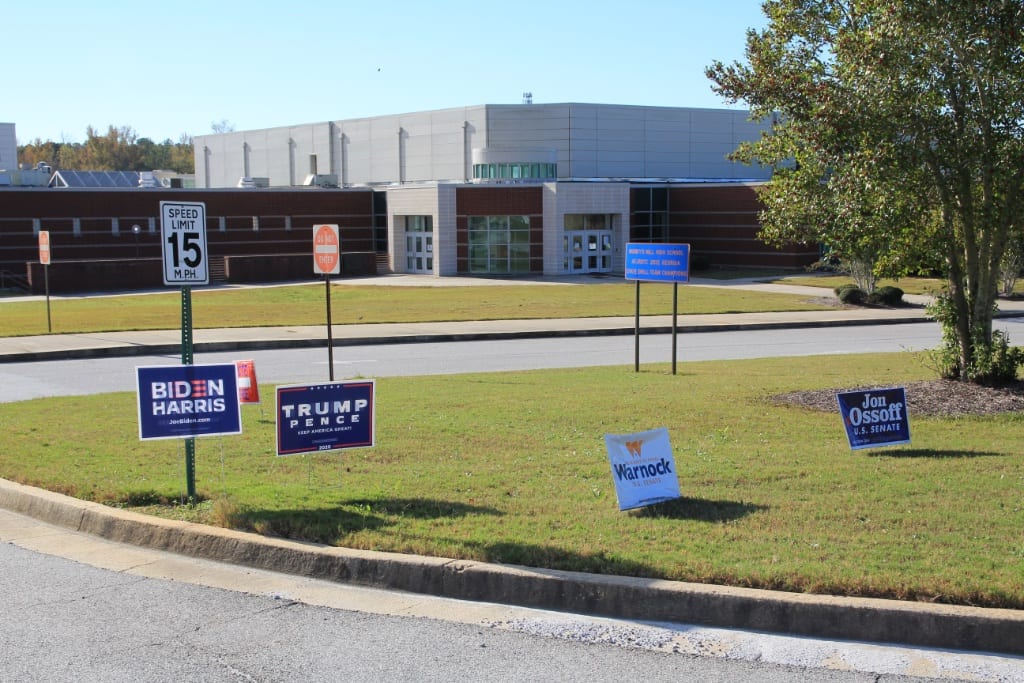 While stores board up their windows, preppers stockpile ammunition and supplies, strangers insult each other in public, and neighbors plead for everyone to look past each other’s ideologies, a Clayton State University historian says this kind of election angst is nothing new.

Dr. Marko Maunula is a professor of post-WWII U.S. history who specializes in economic and political history. For the past 12 years, Maunula also has written a paid blog, Suomen Kuvalehti, covering American politics for the Finnish and Scandinavian equivalent of Newsweek. He is also the author of Guten Tag, Y’all and Globalization and the American South, both published by the University of Georgia Press.

“Dramatic polarization has been a part of American politics for a long time. We have had ‘apocalyptic’ elections as long as I have lived here, since 1992,” Maunula observed. “Every time people feared that, if the other party wins, we are going straight to hell. Now we have a President who has thrown fuel to the fire. Unlike his predecessors, he has not even tried to act as the President of all Americans.”

Some people see cultural shifts as a threat to their conception of America, he said. “Many white, native-born old Southerners are feeling alienated from their native region, with newcomers with their strange languages, foods, religions, etc. This has fed into this ‘real America’ versus strangers dichotomy.”

With every wave of immigrants to the U.S. comes a cultural backlash, whether Mexicans crossing the Rio Grande today or Irish disembarking along the East Coast and Gulf South in the 19th century.

“Naturally, the real and genuine hardships that many blue collar Americans have felt in the age of globalization doesn’t help,” Maunula said. “This has fed the resentment between working class and elites, the country and the city. Also, immigration. Look at Gwinnett County. It was a predominately white suburban/exurban county in the early ’90s, with some 300,000+ residents. Now it has more than 900,000 residents, with roughly a quarter of the population born abroad, and today immigrants from abroad form about 40 percent of the county’s incoming new residents.”

“This same play gets repeated in many localities throughout the U.S. Some people welcome the change, others fear it. This is one of those cultural divides that are really digging the divide between different Americans,” he said.

How might this phenomenon be reflected in the election results? “It is very early. We cannot draw any large conclusions yet, with only a fraction of the votes counted this far. However, it looks like politics are becoming increasingly difficult to predict.”

Joe Biden, who had said that winning Florida would clinch the race for him, could be in trouble in the Sunshine State: “Florida is a big hit for Democrats. It would be a surprise if Biden comes back there.” Maunula said that “This far, Democrats are very [much] underperforming the expectations.”

For example, “if these patterns hold, it looks like ‘shy Trump voters’ really still exist: people who are reluctant to tell pollsters that they will vote for him.”

What’s more, he said, “lots of people are difficult to reach, and their political impact [to] calculate, in the era of cellphones and web communication.”

While it’s still too early to tell which way the election will go as of press time, Maunula said he thought the Democrats were in trouble.

“In Georgia, there are still hundreds of thousands of metro Atlanta votes to count. Things can change,” he said. “However, the early evening looks better than expected to Trump and Republicans.”

One example is the Senate race in Kentucky, where challenger Amy McGrath outspent incumbent Mitch McConnell two to one and still lost.

“That is a bit mystifying,” Maunula said.