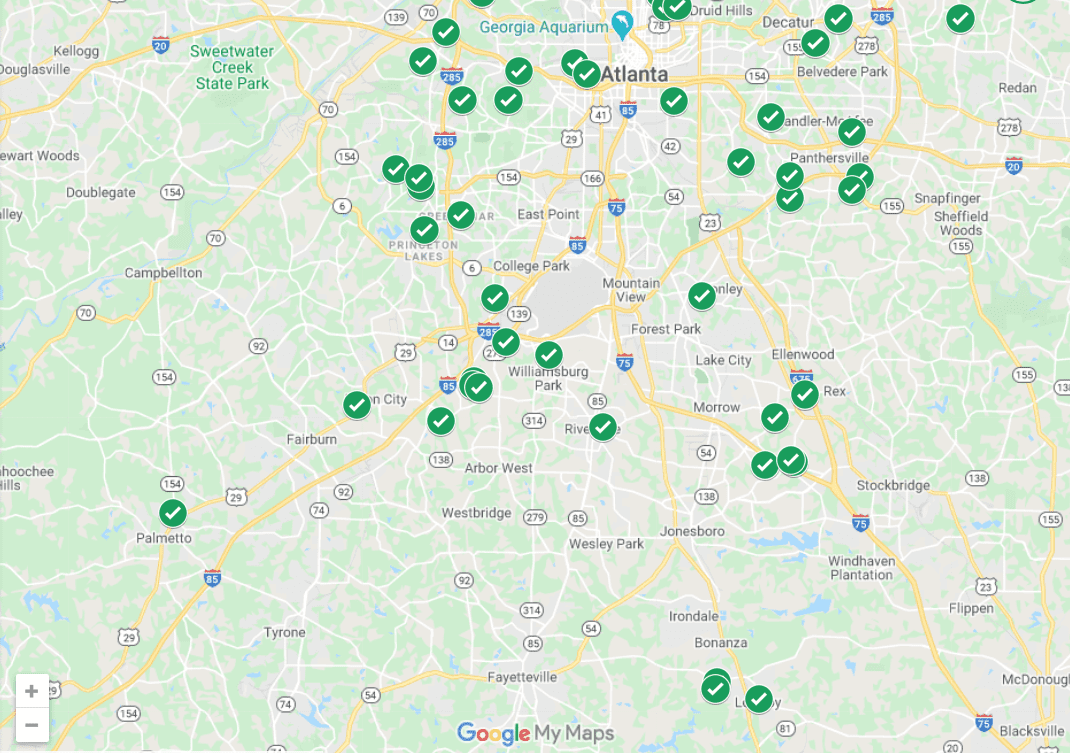 If you need a ride to the polls on Election Day this Tuesday, November 3, the Metropolitan Area Rapid Transit Authority and Uber can get you there.

MARTAConnect and Uber have teamed up to bring voters to any of 99 polling places affected by COVID-19 bus route cutbacks on Election Day.

By downloading a voucher, voters can get up to $8 off each way for trips to and from the polls. (You’ll need to pay for anything over $8, and be sure to tip your driver.)

Follow these steps to take advantage of the Election Day voucher:

Voters can share their experiences with the service by using the hashtag #MARTAconnect2vote on social media.

The voucher is good on Tuesday, Nov. 3 from 5 a.m. until midnight.

Here’s a map of polling places where the voucher can be used:

Parker said the program helps fill in what transportation experts call “the last mile” in areas where MARTA service had to be suspended due to COVID-19.

“This program is meant to do exactly that–provide connections from wherever people are directly to the polling location that currently aren’t being served due to the temporary changes to our bus system,” Parker said.

“Originally, this (partnership with Uber) was going to be used for both planned and unplanned service interruptions on our rail system,” Parker said. “And while we will be doing that post-Election Day, while we plan on using this system–what we call our MARTAConnect program–we saw a great opportunity where this was being put together and launch it with MARTAConnect to vote, to make sure that we minimize, that we eliminate any impact suspended bus services would have on people’s ability to go out and vote.”

The pilot program with Uber will run for one year, Parker said.

Buses from those 99 less-used stops were rerouted in April to allow for social distancing on other routes. “We had to create an environment on our buses where social distancing could be maintained, and the only way to do that was to limit the number of riders on a bus. A bus that had 30 seats, we have blocked off half of the seats, and now that bus can only carry half the capacity. So in order to compensate for that lower capacity, we had to place twice as many buses out on those routes to carry the same number of people.”

Parker said MARTA looked at bus ridership levels in April, the locations of essential services like hospitals, manufacturers, and grocery stores, and used that information to expand service on 40 other routes (now up to 50 plus a circulator).

“We looked at the remainder of the bus routes that were not operating, found the polling locations that would have been accessible by those suspended bus routes, and that’s where we’re focusing our partnership with Uber,” Parker explained, “those polling locations that are not being served because of the essential bus services that we put in place.”

MARTA did this by using its GIS mapping system and information from the county elections officials. “It was a pretty quick effort,” he said.

Parker credits Chief Customer Experience Officer Rhonda Allen, a graduate of Georgia Tech, with putting together the program, which will continue after the election is over in cases like emergency service suspensions.

Allen was responsible for leading “a team of engineers, architects, and construction professionals in the completion of the north entrance of MARTA’s Buckhead Transit Station over a live rail rapid transit line,” according to her MARTA bio.

Allen also was the point person in charge of planning for Super Bowl LIII and the 50th Peachtree Road Race and is a member of the Board of Regents of the ENO Center for Transportation, nonprofit transportation planning and policy group.

“This one was something we approached Uber about and it’s sort of customized to our needs,” Parker said of the initiative. “I’m not aware of another partnership like this that’s specifically aimed at both voting as well as planned and unplanned emergencies.

“Uber is a strong partner around this program,” Parker said, “and we’re excited to be able to use their technology, their system, incorporate it into our technology and our system, and really provide a great customer experience for people to get out and vote on Tuesday, but also over the next year to have another option when we have both a planned rail disruption or an emergency that happens in one of our stations.”