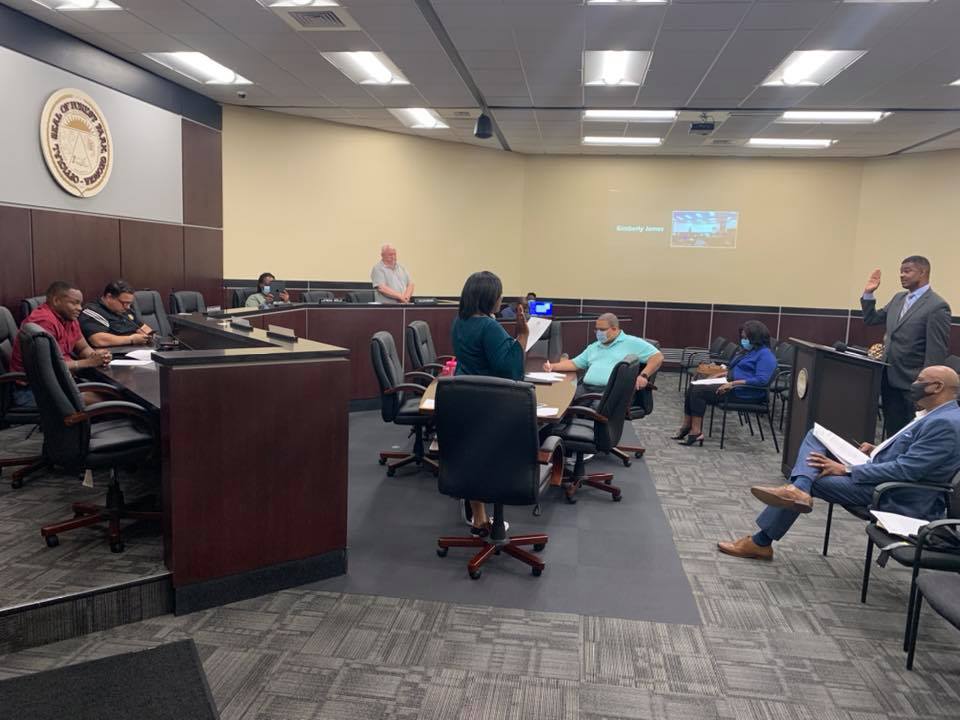 Forest Park City Manager Alfred Barker, Jr. told The Clayton Crescent the city’s ban on members of the public and news media attending council meetings in person may extend through the end of the year.

The Clayton Crescent challenged the policy after not being able to hear or see complete council meetings since the ban started. On September 21, reporter Robin Kemp went to City Hall in order to cover the meeting in person and make a usable audio recording. Mayor Angelyne Butler ordered Police Chief Nathaniel Clark to remove Kemp from chambers in violation of the state’s Open Meetings Act and the First Amendment.

Kemp returned on October 5 and attempted to record the meeting a second time. Butler declared, “This meeting is closed to the public,” and again ordered Forest Park Police to remove Kemp from chambers. Kemp gave a formal verbal protest of the illegally closed meeting and was led out a second time.

On October 19, Kemp was locked out of the building altogether. When a Forest Park Police officer came to the door to deliver a message that the city would give “no allowance” to cover the meeting in person, despite the ongoing issues with the city’s live audiovisual feed, Kemp again registered a verbal protest that the closure was a violation of the Open Meetings Act and the First Amendment. About 20 minutes later, the city shut off the meeting feed.

The city subsequently posted a paper notice of a special called meeting for October 26, adding this disclaimer: “Due to COVID-19 Mayor and Council Meeting is only accessible by the public or media through web or teleconference until further notice. Please refer to the Zoom information located on Page 2 of the Agenda.”

On October 26, Kemp returned to City Hall a fourth time to cover the special called meeting that resulted from the city’s having cut off the previous feed. Again, she was locked out of council chambers. However, a representative from InterDev, the company in charge of fixing the feed, came to the door, then went back inside to find out whether Kemp would be let into the meeting.

Shortly after that, City Manager Albert Barker, Jr. came out and spoke directly with The Clayton Crescent for the first time since he was appointed. Barker reiterated the city’s position that it was concerned about COVID-19 liability. He said the city was looking at reopening chambers to the public in January 2021.

Kemp questioned why Forest Park is still preventing members of the public and the media from attending meetings in person when other jurisdictions either never closed their meetings in the first place or have since restored full public access using COVID-19 safety measures. She also restated The Clayton Crescent’s position that the media ban in particular was illegal.

Here is video of the exchange:

Shortly after this interview, the city ran its first fully audible livestream of the council meeting since March 25, 2020. During this time, the city has held discussions and votes on such important matters as hiring department heads, the city budget, a lack of accountability in contracting, and a proposed mandatory mask ordinance and fine for noncompliant citizens. The poor quality of the livestreams prevented The Clayton Crescent and other news organizations from providing timely coverage of these and other issues before the governing body for a period of several months. It also prevented residents and other members of the public from seeing and hearing the proceedings.

While the video livestream stayed up for the duration of the meeting, the city provided only a static shot from a single camera. That shot did not show all councilmembers and city staffers, nor did it show who was present in the audience–such as people seeking to do business with the city or additional staff present at the meetings.

A formal complaint by The Clayton Crescent’s attorneys about the closed council meetings and its reporter’s repeated ejections is before Georgia Secretary of State Chris Carr.

The Clayton Crescent is represented in this matter by the University of Georgia Law First Amendment Clinic, with additional support from media attorney S. Derek Bauer of Baker Hostetler and the Georgia First Amendment Foundation.