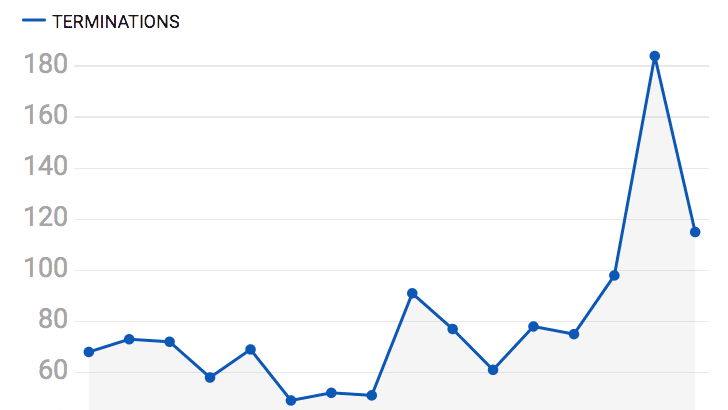 Data provided by the Clayton County Sheriff’s Department shows that at least 1,271 staff members have been terminated since 2005, with Sheriff Victor Hill responsible for at least 1,050 of those terminations.

Several former deputies have complained about Hill’s management style, alleging the sheriff retaliates against employees who run afoul of him.

In response to an Open Records Request by The Clayton Crescent, CCSO released the names, employee numbers, and hiring and termination dates of employees since 2005. These figures do not seem to include the recent firing of 20 jail employees who Hill alleges falsified nearly $1 million in overtime since the new fiscal year began July 1.

These dates include Hill’s terms as sheriff, as well as the single term former sheriff Kem Kimbrough held from 2008 through 2012. During Kimbrough’s four-year tenure, 221 employees were terminated.

In 2005, when Hill took office as Clayton County’s first Black sheriff, he famously fired over 20 employees and had them removed while snipers sat atop the Justice Center. Three of those employees filed suit in 2013, alleging wrongful termination. They won a $750,000 settlement and their jobs back in 2016.

A 2015 study in Criminal Justice Policy Review noted, “Nationally, the total turnover rate was 10.8% in both 2003 and 2008. There was much consistency in turnover rates between survey years. Turnover rates, however, were higher in smaller agencies, municipal agencies, those in southern regions, and those in rural areas.”

According to the study from Wayne State University’s Criminal Justice department, turnover at law enforcement agencies comes with several direct and indirect costs: recruitment, screening, training, the loss of expertise and experience, “decreased social networks and contacts, increased use of inexperienced and/or tired staff, insufficient staffing, and decreased morale.”

Worse, the study said, turnover tends to have a cascading effect: “increased frustration among officers who remain due to increases in workload demands and a loss of social relations with those coworkers who have left.”

Some turnover can be a good thing, the study noted, pointing to underperforming officers and “administrative and cultural change within the agency.”

While the study noted that employee retention is “an important indicator of the effectiveness and efficacy of an organization…without benchmarks, it is impossible to evaluate retention within agencies.” The study noted differences in turnover by such factors as agency and region, and offered a tentative formula for measuring turnover rates, but concluded there is too little data in this field of study. It did find that suburban agencies, Southern agencies, municipal agencies, and those with fewer sworn officers had higher turnover rates.

CCSO did not provide reasons for the employees’ terminations.