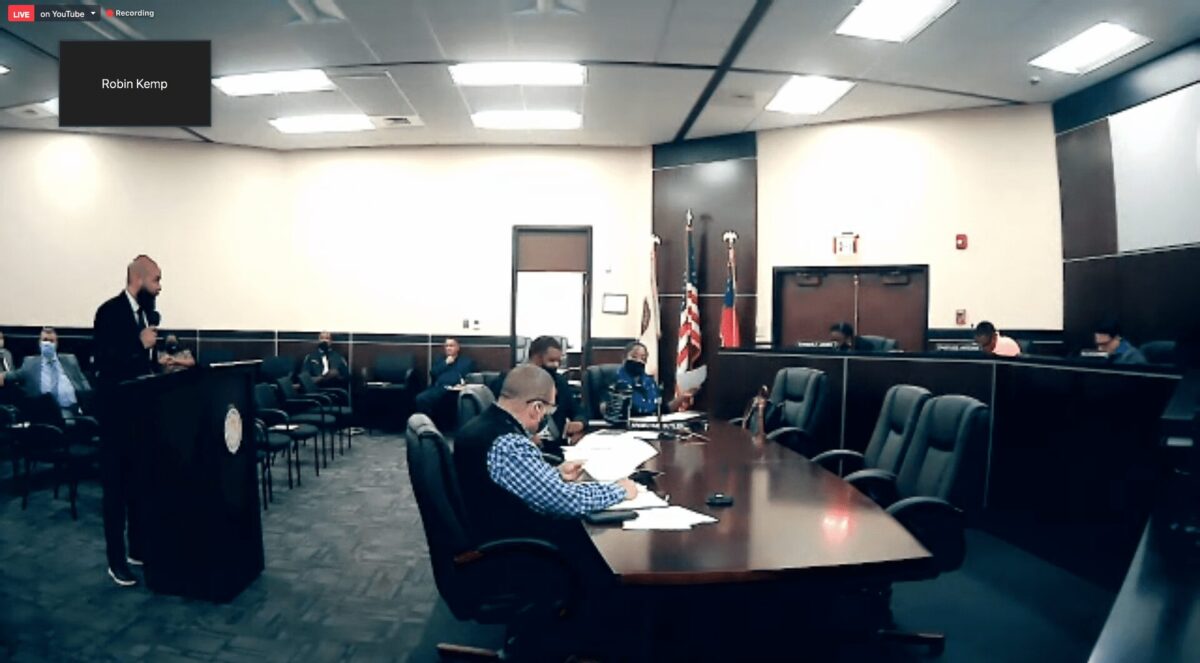 For the first time in months, the Forest Park City Council has established a functional livestream for citizen viewing of its meeting. However, not all councilmembers could be seen at all times; neither can the wider audience allowed into chambers. This prevents citizens and the press from getting a complete picture of the proceedings.

The Clayton Crescent went to the doors of council chambers to check whether the media ban was still in place. A representative of InterDev came to the door, then City Manager Albert Barker came out to speak about the lack of physical public access.

Barker said the city was looking at reopening Council chambers in January. He said the city was still trying to work out safety and liability issues. The Clayton Crescent pointed out that the ongoing ban on any physical media presence posed serious First Amendment concerns. Barker gave his contact information and suggested a meeting later in the week.

The Clayton Crescent then tested the meeting connection via Zoom and YouTube, both on cellphone and on desktop, as well as the YouTube feed via smart TV. All tests yielded video and audio that could be seen and heard for the most part.

Some audio glitches happened when Sparkle Adams tried to speak remotely after being awarded Ward 1 Yard of the Month (“chipmunk” audio) and when audio dropped during Fire Division Chief Joel Turner’s report.

Another issue with the lack of in-person media access is the lack of access to agenda packets, which has been an ongoing issue since well before the COVID-19 emergency was declared. Agenda packets contain documents in addition to the basic agenda and are an important resource for journalists and for interested citizens.

About 20 people were able to dial into the Zoom call, either by streaming video or phone. Three viewers were on the YouTube stream, with the city’s Facebook event link taking viewers directly to the Zoom sign-in page.

Councilmembers Kimberly James, Dabouze Antoine, Hector Gutierrez, and Allan Mears, as well as Barker, Fire Chief Don Horton, Parks and Recreation Director Tarik Maxwell, Public Works Director Bobby Jinks, Police Captain Mike Gentry, and City Attorney Mike Williams went maskless or wore masks below the nose or on the chin while in chambers October 26. Neither Councilwoman Latresa Akins-Wells nor Councilman Allan Mears could be seen during most of the meeting. Councilwoman Latresa Akins-Wells could not be seen during most of the meeting, but appeared wearing a mask after the discussion of a proposed mandatory mask ordinance. She later wore the mask on her chin. Councilman Allan Mears was not in camera view until his closing remarks.

The city has posted signs at the entrance to council chambers and City Hall, as well as installed street signs around the city, urging the public to wear masks. It also has posted a sign with the state’s COVID-19 liability disclaimer outside council chambers.

However, Barker said the delay in keeping the public and media out of chambers is a health and liability issue.

When the council debated a mandatory mask ordinance, Akins-Wells pointed out that not everyone in City Hall was wearing masks and suggested the city “clean our own house” first.

Williams said, “We all know we should be doing it (wearing masks), yet how far do you take enforcement? It’s a sticky situation.”

Councilmembers reached no consensus about proposed fines for those not wearing masks and were reluctant to have police officers enforce such a law. The motion was withdrawn.

Department heads continue to present slides of their talking points when they give reports.

City officials said they need to find a recording of an eight-hour budget session from May 29. Mayor Angelyne Butler suggested outsourcing the recording for transcription. Councilwoman Latresa Akins-Wells said she didn’t see any need to outsource transcription, adding that whoever was doing the minutes “just has to do it.” An eight-hour recording, using generally-accepted industry measures, would take at least 24 hours to transcribe.

Gutierrez apologized for the previous meeting’s livestream failure, saying the city had fixed things “for the most part,” adding, “It’s a work in progress.”

The Clayton Crescent has filed a complaint with the Georgia Attorney General’s office over the lack of access to city government under the Open Meetings and Open Records Acts since the COVID-19 emergency declaration. The Clayton Crescent is represented by the University of Georgia Law First Amendment Clinic and media attorney S. Derek Bauer, with additional interest from the Georgia First Amendment Foundation.