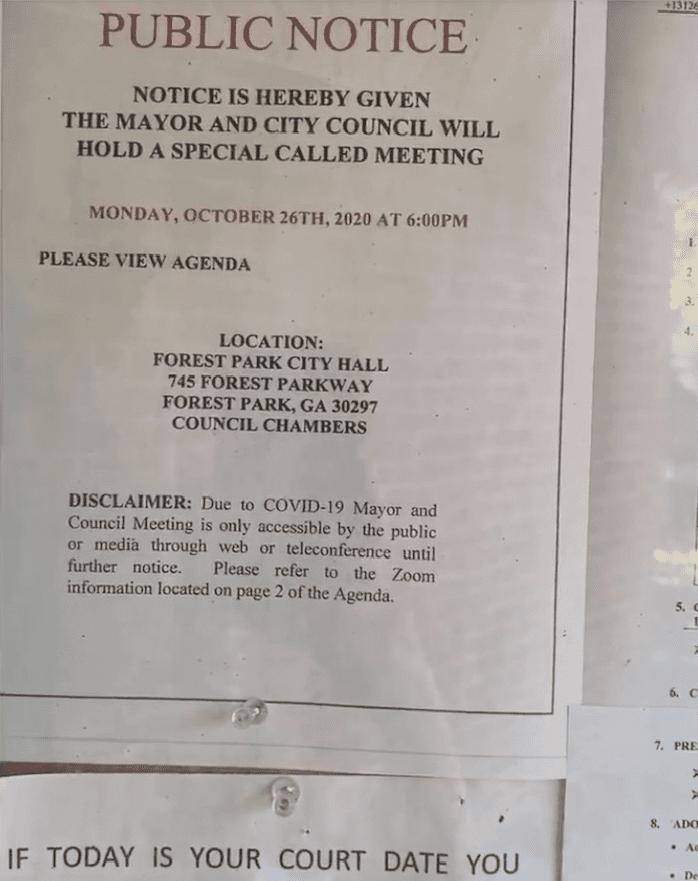 In a notice posted outside City Hall sometime since the Monday, October 19 city council meeting and the afternoon of Thursday, October 22, the City of Forest Park has declared future meetings closed to members of the public and the news media.

The city has used Forest Park Police to remove The Clayton Crescent from the last three public regular called meetings of the city council, claiming that it was doing so because the city has closed all public buildings due to COVID-19. The Clayton Crescent has published photos of most councilmembers, the mayor, the police chief, and the city manager not wearing masks in chambers or, as the mayor did on one occasion, wearing the mask on her chin. Most of these officials, along with other appointed board members and city staffers, also went without masks at numerous recent public events in Starr Park, in violation of the mayor’s COVID-19 emergency declaration.

The Clayton Crescent checked the city’s outdoor bulletin boards where public notices are placed in addition to the Clayton News legal advertisements. Posted Thursday was a notice for a special called meeting for Monday, October 26 at 6 p.m.

At the bottom of the notice was this “disclaimer”:

“Due to COVID-19 Mayor and Council Meeting is only accessible by the public or media through web or teleconference until further notice. Please refer to the Zoom information located on Page 2 of the Agenda.”

The city abruptly cancelled Monday’s meeting due to its ongoing issues running a livestream via Zoom or other means. The city has not explained the specific details for a series of what it has called “technical difficulties” livestreaming council meetings since at least this summer. Finally, The Clayton Crescent attempted to record those meetings in person and was removed twice and barred once by police on Butler’s orders.

As a result, The Clayton Crescent is pursuing legal action against the City of Forest Park for violating the Georgia Open Meetings Act and the First Amendment.

Councilwoman Latresa Akins-Wells said Mayor Angelyne Butler “knew about [the Zoom streaming issue] for the past two months” and accused the mayor of stopping InterDev, the city’s contracted website company, from bringing in people to fix the issue “because she wants a friend to do it.”

“When InterDev was going to bring in someone new, she said no, she had someone in mind,” Akins-Wells said. “She signed off on the check [for the studio]. To me, that’s a conflict of interest because the mayor is chairperson over the Downtown Development Authority. The city attorney [Mike Williams] said there working on that at the legislature so it will be a violation, but it’s not yet.”

That friend, according to Akins-Wells, is Marc Norsworthy, the same person who got an $18,785 check from the Downtown Development Authority on Aug. 20–without a public bid–to build and outfit a 4K video production studio on the second floor of the Hartsfield Community Center.

Akins-Wells said no councilmembers are allowed to use the studio–only Butler.

She also said Butler signed the check, which Akins-Wells called “a conflict of interest because the mayor is the chairperson over the DDA.”

However, Akins-Wells said City Attorney Mike Williams had stated that it would not be a violation for Butler to sign the check, but that the Georgia Assembly was working on legislation at the time “to make it one.”

A check of bills in the Georgia Assembly addressing development authorities returned only House Bill 34.

In 2019, five members of the Clayton County House delegation introduced HB34, which, if passed, would limit certain powers of development authorities. Nothing in that bill specifically mentioned signing checks but the draft legislation did provide for members to be removed for cause, “which shall include, but shall not be limited to, neglect of duties, incompetence, failure to meet the residency requirements… . or unethical or dishonorable conduct likely to deceive, defraud, or harm the public, county or municipality.”

Asked to respond to Akins-Wells’ claims, Butler said in an e-mail response, “Misinformation occurs when ill-informed people attempt to inform the uninformed.”

According to Butler, “The initial quote from InterDev was north of $24,000.  The governing body including ‘your source’ was asked and majority ‘including your source’ of the council DID NOT want to spend that much money. And to be honest…THIS IS THE RESPONSIBILITY OF THE CITY MANAGER! But I digress.

“The gentleman [Norsworthy] that [Wells is] making false accusations on made a SUGGESTION to remedy the livestream issue that is cost effective.”

Butler said that, “after the initial $24,000 did not get an unofficial approval from the council, our procurement manager (A. Girard Geeter, who Butler said was hired “about two months ago”) requested three quotes for the audio, video equipment for the council chambers.”

Butler said the bids came in as follows:

“Given the major gap in the quotes, it is evident the companies were not bidding on the same specs, which is not true to the procurement process,” Butler said. “I did not tell InterDev to halt anything.”

She added, “As a full-time employee, the city manager was selected by the governing body to handle the day-to-day operations of the city.  In fact, our city manager was chosen by ‘your source.'”

Butler said that, “with (Geeter’s) arrival, we have centralized the procurement process.  He can tell you exactly who the companies were.  He just provided me with the names,” adding, “Each department (contracting for goods and services) in their own regard has been a long standing practice in the city.”

As for the DDA, Butler pointed out that she is “NOT the only mayor in the state and in Forest Park to serve on said board(s). The board members, like the governing body, vote to determine what they feel is best. I cannot attest to the future legislation at the Georgia Assembly, but to date NOTHING I do is of conflict. I will NEVER choose an associate over the process.  I have always advocated for 1) establishing a process AND 2) following said process. “

The mayor then questioned Akins-Wells’ credibility: “To anyone who says otherwise, I say consider the source.  The police chief hiring process, the second council aid(e), the sanitation contracts are just a few examples of the aforementioned.”

You can see which RFPs (requests for proposals, or bids) the city has published on its website at https://www.forestparkga.org/request-for-proposals.aspx or check the legal ads in the back of the Clayton News or search online at the Georgia Press Association’s public notice site, https://www.georgiapublicnotice.com.

The current members of Forest Park’s Downtown Development Authority, according to Akins-Wells, are:

DISCLAIMER: The Clayton Crescent takes the position that the City of Forest Park is violating the Open Meetings Act by failing to allow the press into chambers and by having repeatedly failed to provide a working livestream of the meeting.