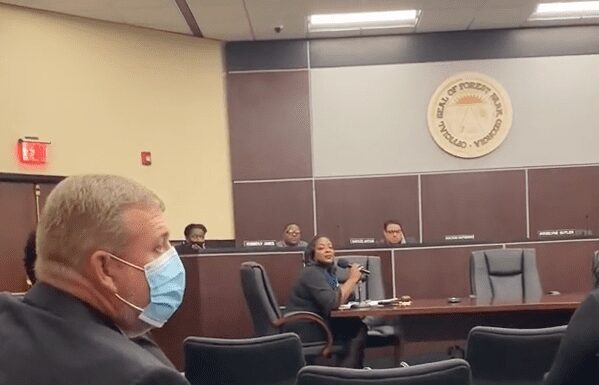 The Clayton Crescent’s legal team received a response October 21 to its demand letter that the City of Forest Park take steps to ensure the public has full access to City Council meetings. The University of Georgia Law First Amendment Clinic, which is representing The Clayton Crescent pro bono on the matter, had asked that the city respond by October 15.

As previously reported, Kemp announced that she was there to cover the council meeting, wore masks in compliance with signs posted on the front door to council chambers, and submitted to a Forest Park Police Department search of her bag. On three occasions, at the direction of Mayor Angelyne Butler, Forest Park Police removed Kemp from the meeting: September 21, October 5, and October 19.

The letter claims that “The City of Forest Park is fully committed to meeting its responsibilities to comply with the requirements of the United States Constitution and the Georgia Open Meetings Act.” The letter also claims, “We proudly report that the City has been able to both provide public access to meetings while also protecting staff and residents from further spread of this deadly virus. While the City’s efforts have not been perfect, in no way has the City violated the Constitution or the Open Meetings Act.”

The letter did not explain why city officials, including Mayor Angelyne Butler, City Manager Alfred Barker, Jr., Police Chief Nathaniel Clark, Councilmembers Hector Gutierrez, Allan Mears, Kimberly James, and Dabouze Antoine (see photos) have gone without masks during those meetings. It also does not explain why the city has, for several months, been unable to provide consistently audible or visible livestreams of City Council meetings in progress, nor why it has told citizens to file Open Records Requests for audio after the fact, nor why it has posted partial recordings, such as one that began after Kemp presented a formal verbal protest during the October 5 meeting. (After Kemp pointed out this fact in a public post, the city posted the full meeting video, including low audio of Kemp’s declaration but not including audio of her stating her name.)

In addition, none of the published minutes from the meetings during which the mayor ordered police to remove Kemp mentioned those removals or the formal verbal protest that the city was in violation of the Georgia Open Records Act and the First Amendment of the United States Constitution:

City officials have made various claims when questioned about the lack of public access to council meetings. Butler has said that microphones in chambers were defective and would be replaced. Clark has said that the reason for the mayor ejecting The Clayton Crescent’s reporter was due to health guidelines. Captain James Delk has said that he was to deliver the message that there would be “no allowance to enter the council meeting.” Several times, the city’s representatives have claimed on social media that the livestream was down due to “technical difficulties.”

After The Clayton Crescent’s legal team issued a demand letter, the city began to produce more detailed minutes of those meetings, while referring readers to the city’s YouTube channel for whatever councilmembers said specifically.

Masks for thee, but not for me

It is The Clayton Crescent’s position that, by preventing The Clayton Crescent from covering the meetings in person, by repeatedly failing to make synchronous audio and/or video available to the public, by requiring citizens to submit preapproved public comments hours before the meeting (but, most recently, minutes after the agenda was posted) and by requiring citizens to wait to see and hear whatever city-made recordings may be available, the city is exercising a form of prior restraint that allows it to conduct business without timely public scrutiny.

As for the city’s claim that it is safeguarding the health of employees and other citizens of the city, one only need look at the recent series of city-sponsored festivals, tailgate parties, concerts, and food truck events–not to mention sporting events in which both spectators and child athletes come into close contact without masks–to see that the city is selectively enforcing the mayor’s emergency declaration only where serious matters are involved.

The company you keep

Those serious matters, at least some of which The Clayton Crescent has just barely been able to hear via poor-quality city audio or read about after the fact whenever the city chooses to publish minutes or post public notices, include:

Our position is that it appears the city is using its COVID-19 declaration as a fig leaf to cover business deals that it is doing outside full public scrutiny. And it is using rank-and-file law enforcement officers to do their bidding in contravention of state and federal law by putting them in the unenviable position of being ordered to eject a law-abiding journalist who is following mask and social distancing recommendations while engaged in newsgathering.

The irony that the city can, in under a month, secure funds, enter into a contract, have a studio built out in a community center for the mayor’s personal use, and hold a public event to show it off while also claiming it has both “proudly…been able to provide public access to meetings” and suffered a series of technical incompetencies and mishaps with plug-and-play technology that other municipalities, the county, the courts, the school system, and any citizens who want to have remote video conversations with one another are easily able to manage is, not to put too fine a point on it, ridiculous.

The city’s disingenuous claim that it is attempting to protect public health fails to account for its inconsistent enforcement of the “city-wide” rule in Starr Park, Kiwanis Stadium, the Rec Center, and the Community Center. City officials themselves put everyone in chambers at risk by repeatedly removing their masks and sharing a microphone, and everyone at Starr Park at risk by removing masks for photos (including one with a citizen with breathing issues) or just for the heck of it.

Let’s call a thing a thing: the city is engaging in a heavy PR campaign, including vanity video production using $18,785 for an apparently no-bid (as no notice turned up in the legals) contractor and about another $200 from a city department to upgrade the electrical for it (as opposed to paying a professional PR firm for video campaigns as needed or leasing gear that depreciates and is obsolete in a few years); free food giveaways supplied by the U.S. Department of Agriculture, not by the city officials taking credit for them; and festival after festival held on the city’s dime while city officials are doing business behind closed doors and flagrantly and repeatedly violating the Georgia Open Meetings Act and the First Amendment. To slow direct confirmation of such weighty matters, rather than simply being transparent, the city is arbitrarily using the Open Records Act’s copying fee provision to try and price out The Clayton Crescent’s requests for records that it already has the legal right to see. The citizens of Forest Park have a right to know what is going on, to question their elected officials, and to hold them accountable for their actions. Period.

This is especially the case when public funds are in play and the city is using its police force to shut out the press.

It is the news media’s job to serve as watchdogs of, not lapdogs to, the government. The Clayton Crescent reminds city officials that members of the media are considered essential workers and thus should be afforded access on behalf of the wider general public.

The Clayton Crescent has complete faith in its legal team and in the state Attorney General’s Office in this matter and will continue to advocate for transparency and full public access for the citizens of Forest Park, who have every right to know what their government is doing with their tax dollars, both before and during the fact; with whom they are doing it; and at what price.