It’s all about the maps at the Oct. 20 Clayton BOC meeting 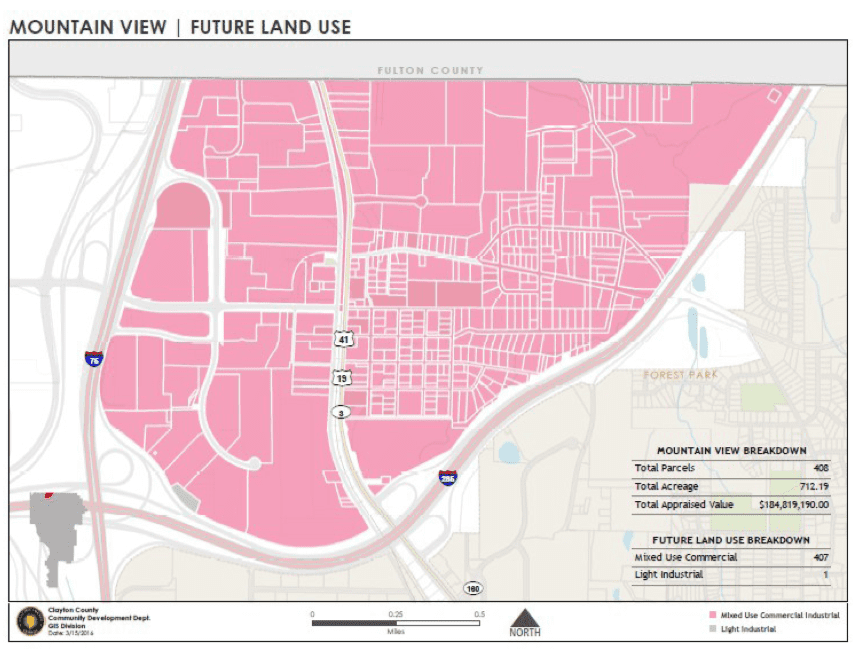 Changes to proposed zoning areas in the Mountain View district, as well as a number of zoning applications that the Zoning Advisory Group has recommended for denial, will come before the Clayton County Board of Commissioners at its 6:30 p.m. meeting tonight.

The board also has a lengthy consent agenda to consider.

The Mountain View area next to Hartsfield-Jackson Atlanta International Airport has been the site of contention for the past couple of years as board members duked it out over whether to create a “live-work-play” district, attempt an end run around the State of Georgia to woo Amazon’s second headquarters, or turn the area into a light industrial and logistics hub.

Tonight, the board is “requesting the adoption of an amended Mountain View Overlay District Boundary Map” in District 2 (represented by Commissioner Gail Hambrick), which would “encompass the eastern portion of the Mountain View Overlay (east of Gilbert Road).” The agenda does not include the list of parcels nor a parcel map of the proposed boundary changes, but notes that they are “attached to the staff analysis and are available for inspection in the Department of Community Development.”

In addition, the board will vote on whether to rezone 32 parcels labeled as Regional Entertainment (MV-REN), and Mixed Use Makers and Advanced Manufacturing/Entertainment District (MV-MME) to Industrial Park (INDP). Similarly, those boundaries “of the first newly established Industrial Park District is depicted on a related boundary map and parcel list which is attached to the staff analysis and may also be inspected in the Department of Community Development.”

The Zoning Advisory Group has recommended the BOC vote against those changes. The Clayton Crescent checked ZAG’s homepage for the minutes of its October 6 meeting and found no recent minutes or agendas had been posted. However, there were links from previous Zoom meetings on ZAG’s main page.

A check of the county’s main meetings calendar shows no ZAG meetings posted since 2017.

The BOC also will consider rezoning a large chunk of the Tara Boulevard Overlay and Bouldercrest Road at the request of the Community Development Department in unincorporated District 3 (represented by Commissioner Felicia Franklin-Warner). The proposal involves changing 14 parcels of land, currently zoned Mixed Use District (MX), to Mixed Use Industrial (MXI). Those properties include:

Also included in Resolution 2020-205 (last item in the published agenda packet) is rezoning for what the text of the resolution says are five additional properties on Bouldercrest Road in Ellenwood. The change would be from Heavy Industrial (HI) to Residential (RS-180) within District 1 (represented by Commissioner Sonna Singleton Gregory). However, seven parcels are listed. Those include:

Other zoning matters on tonight’s agenda include:

Zoning matters are taken up last on the BOC agenda. The meeting is held at 112 Smith Street, Jonesboro. You can also watch live, either via livestream at http://claytoncountyga.iqm2.com/Citizens/Detail_Meeting.aspx?ID=1264 or televised on CCTV23/U-Verse 99. Social distancing and masks are in effect in chambers.