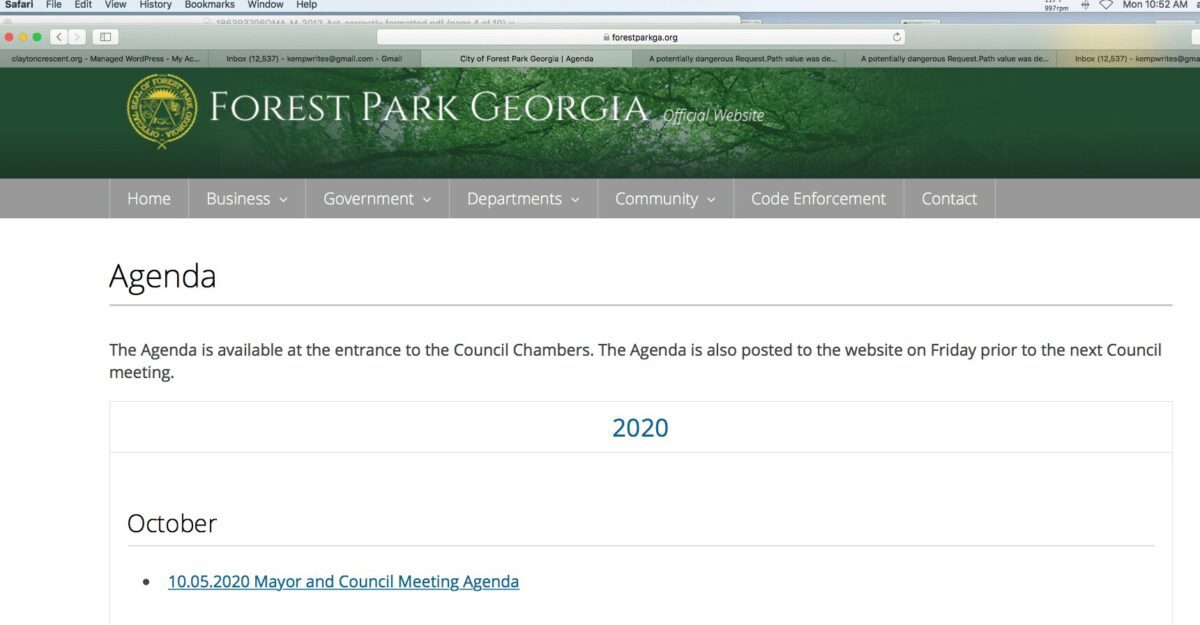 The Forest Park City Council will consider making it mandatory to wear face masks in public, with fines for those who refuse to do so.

The ordinance, proposed by Councilwoman Kimberly James, would impose a $25 fine for a first offense and $50 fine for second and subsequent offenses, with some exceptions for age, disability, “or other reasonable circumstances.”

The move comes after Gov. Brian Kemp dropped legal action against the City of Atlanta, which had passed a mask requirement. The Georgia Municipal Association, which provided cities with a model ordinance for imposing a face mask requirement, notes that cities in counties with 100 cases per 100,000 people over the previous 14 days “are allowed to impose a Local Option Face Covering Requirement, but are not required to do so.”

Private businesses and organizations are exempt from any fines and the maximum penalty cannot exceed $50. However, businesses can post a sign saying they consent to enforcement of the ordinance against violators on its property.

The requirement also cannot be enforced at any polling place, people on residential property, or any business that posts “a reasonable public notice” that it does not consent to enforcement on the business’ property.

The proposed ordinance also would require a warning about the health risks of not wearing a face mask before issuing a citation. GMA says the city “shall make good faith efforts to distribute free masks to those who cannot afford a mask” and that someone found in violation cannot afford a mask, the city “must provide them a mask at the local government’s expense.”

GMA notes that “Local governments have the authority to control the terms of entry onto property owned or leased by the local government regardless of whether the Threshold Requirement is met or not.”

There is some question as to whether preventing members of the news media from covering government meetings in person is constitutional and a violation of the state’s Open Meetings Act. The Clayton Crescent, represented by the University of Georgia Law First Amendment Clinic, has not received a response to a demand letter sent to the city to open its meetings to the public while following social distancing and mask guidelines. The letter came after city officials twice removed The Clayton Crescent from council meetings. City-provided livestreams have repeatedly gone offline or been inaudible, forcing citizens to wait days for the city to post recordings of council meetings. The city was to have responded to the letter by October 15 but did not do so. The Georgia Attorney General’s Office is looking into the matter.

Also scheduled for discussion is the approval of an ordinance to establish the city’s final ad valorem (sales) tax, with presentations from City Manager Albert Barker, Jr. and Finance Director Ken Thompson. The proposed millage rate, 16.743, is the same as last year’s.

The council also will consider unfreezing and funding four Public Works positions–three heavy equipment operators and one building maintenance trade specialist–with presentations by Barker and Public Works Director Bobby Jinks. The positions “were frozen in an attempt to balance out the new contract for waste management fees raising,” according to the agenda.

Waste Management is also scheduled to present a $10,000 check for recycling to the city tonight.

The city posted the October 19 agenda around 11:05 a.m. the day of the meeting. Citizens were given until 12 noon–less than one hour–to submit public comment.

The Clayton Crescent asked City Clerk Sharee Stead whether the city would consider extending the deadline for public comment, given the lateness of publishing the agenda. Steed said she would ask City Attorney Mike Williams and City Manager Albert Barker, Jr. No extension was noted when the agenda was finally published after 11 a.m.

The meeting is scheduled to be livestreamed via Zoom:

To listen in by phone instead, you enter either of the following strings of characters, then hit your call button: