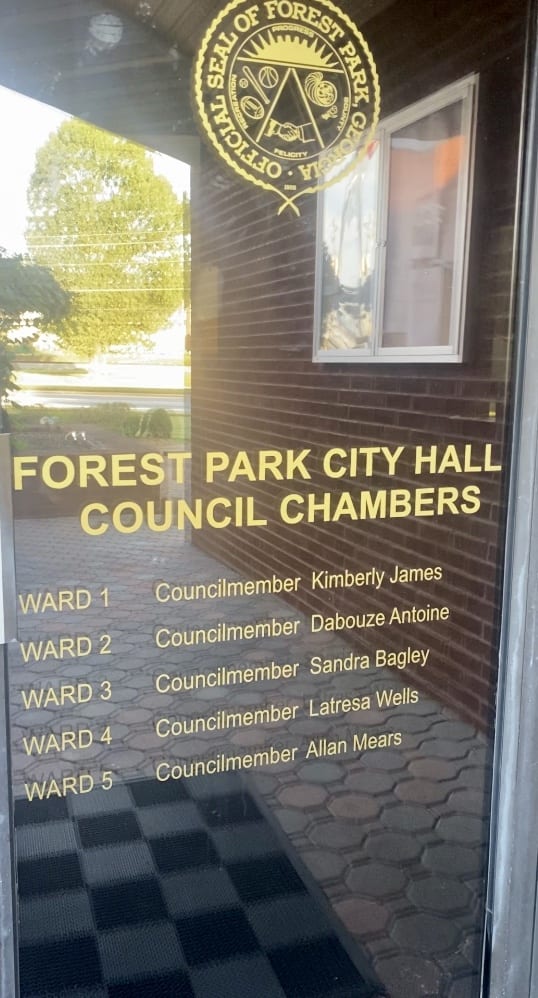 Press locked out a 3rd time, no remote access

For the third meeting in a row, the Forest Park City Council barred the Clayton Crescent from entering chambers to cover the regular scheduled meeting on October 19.

When The Clayton Crescent’s reporter, Robin Kemp, arrived at City Hall at 5:56 p.m., she found the doors to council chambers locked. After Kemp knocked on the door three times, Capt. James Delk of the Forest Park Police answered.

Kemp stated that she was there to cover the city council meeting.

Delk: “I’ve been instructed that there’s no allowance inside the council meeting.”

Kemp: “They are in violation of the Open Meetings Act.”

Delk: “I’ve been instructed there’s no allowance inside the council.”

Kemp: “I understand that. I just want to let you know that I have already told counsel about this, legal counsel about this. The city is in possession of a demand letter that they should have answered by October the 15th. They have not answered it. And so therefore, I am once again as a member of the media, coming here one more time, trying to get into this open meeting.”

Delk: “But you understand where–“

Delk: “Just passing on the instructions.”

Kemp and Delk talked about some unrelated police matters. Then Kemp returned to her car and attempted to watch the meeting via the published Zoom meeting address that the city put out around 11:10 a.m. on Monday. No video was available other than a static graphic of the city’s logo. Audio was not fully audible, although voices could be heard discussing how to get the livestream working. At 6:17 p.m., the feed stopped and a message on screen indicated “The host has ended this meeting.”

Shortly after, several city officials could be seen leaving the building one after the other. Kemp asked Councilman Allan Mears and Councilwoman Kimberly James, who were conversing in the parking lot, whether the meeting had concluded or whether it had been cancelled.

“It was cancelled,” James said. “We had to reschedule it because it wasn’t open enough to the public.”

Mayor Angelyne Butler had ordered Police Chief Nathaniel Clark to have police eject Kemp from the September 21 and October 5 regular called City Council meetings, allegedly as a COVID-19 safety measure. However, other members of the public doing business before council were allowed in, city officials did not wear masks in chambers, and on two occasions, city employees indicated there was a list of people “approved” to enter council chambers.

Kemp lodged a formal protest in the open meeting of October 5 that she recorded on video. The September 21 meeting minutes do not reference The Clayton Crescent’s ejection from the meeting. The October 5 minutes had not been published as of press time.

The City of Forest Park had been asked to respond to a demand letter from the University of Georgia Law First Amendment Clinic by Thursday, October 15 regarding several violations of the state’s Open Meetings Act and demanding the city take several specific steps to ensure that all citizens are able to both see and hear the entirety of the City Council meeting, by live-streamed teleconference and in person through social distancing with seats reserved for the news media. The city did not respond to the letter. The Georgia Attorney General’s Office also has expressed interest in resolving the issue.

Also on October 19, missing minutes from two September council meetings were published on the city’s website. The city has a new clerk and the minutes are in some ways more specific about actions taken during council meetings. However, they refer readers to videos on the city’s new YouTube channel for specifics of any comments or discussions by council members. YouTube videos do not include simple fast-forward or rewind controls and the videos do not contain markers at those points where such discussions take place.

Despite the city’s ongoing difficulties with running video of council meetings, the Downtown Development Authority paid almost $19,000 to build a 4K video production studio in the Hartsfield Community Center. Butler, who said she would be hosting programming there, told The Clayton Crescent that the studio exists to dispel “untruths” about the city.

In addition, both routine and significant actions are not being announced to the public or the press. For example:

The Clayton Crescent will consult with its legal team regarding its defense of the Open Meetings Act and the First Amendment on behalf of the citizens of Forest Park and the general public. It is The Clayton Crescent’s position that citizens have a Constitutionally- and statutorily-protected right to know what their elected officials are doing, who else is present before the governing body, who is seeking to do business with the city, and to access public meetings of the governing body. The Clayton Crescent strenuously protests unilateral declarations by elected officials “closing” an open meeting.