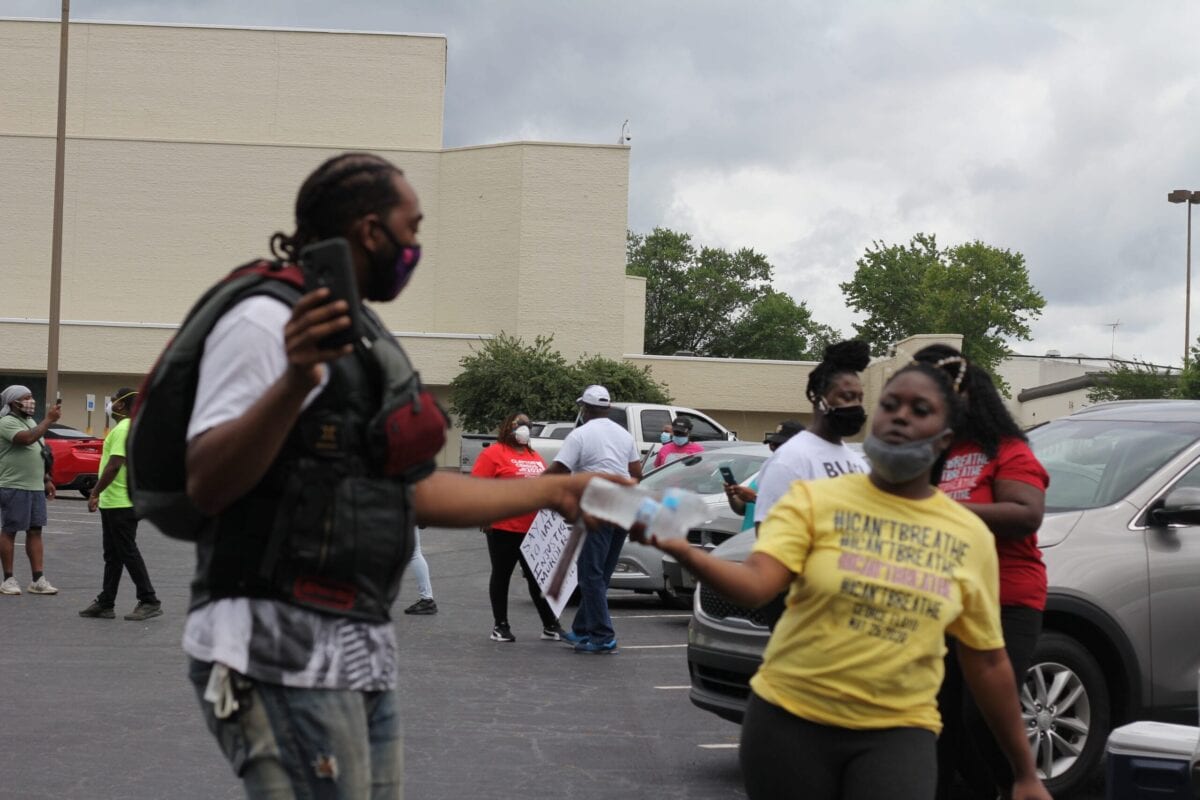 Did armed militia members draw down on a peaceful demonstration in Morrow?

The Clayton Crescent’s Robin Kemp, who covered the Black Lives March on June 8 in Morrow, was interviewed October 7 by Micah Loewinger of WNYC-FM’s show “On The Media.”

Loewinger, who along with Hampton Stall of MilitiaWatch had been tracking militia groups’ use of the Zello communications app, wanted to know whether Kemp had seen any militia members at the event. He said he’d heard online chatter to that effect from people who claimed to be with the Georgia III% Martyrs.

The Georgia III% Martrys recently got some high-profile press when they provided security for Sen. Kelly Loeffler at a campaign event:

Great to be in Ringgold today with @mtgreenee and a fired up crowd of Patriotic Georgians!

Now more than ever, we need outsiders and businesspeople in Washington who will FIGHT to protect the #2A, defend innocent life, and advance our conservative values! #gasen #gapol pic.twitter.com/Z3j0n4zbyW

Kemp said she had seen a couple of Black demonstrators wearing camouflage and plate carriers (body armor vests) that didn’t seem to contain plates but that they did not appear to be armed. She did not see any white protestors opposing the Black Lives Matter march and she did not notice anyone armed staked out near the parade route, the mall, or Morrow City Hall.

However, she did interview a couple from Atlanta that expressed happiness at seeing the march, and saw and recorded numerous drivers and passengers who beeped horns, raised clenched fists out of open car windows and sunroofs, and cheered as they passed the marchers.

Part of the WNYC story touches on whether some local police departments “are enabling” armed vigilantes. In 2019, the Center for Investigative Reporting’s “Reveal” reported its analysis of Facebook groups found “almost 150 current and retired cops who were members of Facebook groups run by and for Oath Keepers, Three Percenters and other militias. These law enforcement officers are a subset of a larger contingent of cops we identified as members of Confederate, anti-Islam, misogynistic or other extremist groups on Facebook.”

The Clayton Crescent asked former Morrow Police Chief Jimmy Callaway directly whether he had received any offers of help from the Georgia III% Martrys. Callaway said, “I can tell you no. No one reached out to me except CCPD (Clayton County Police Department) and CCSO (Clayton County Sheriff’s Office). We had a great peaceful demonstration.”

Callaway is also president of the Georgia Gang Investigators Association, which monitors gang activity among groups of all racial backgrounds.

Whether membership in a militia group constitutes gang activity or an expression of patriotism may depend on whom one asks and what actions the members actually take. Some groups that call themselves “militias” engage in open-carry demonstrations to promote the Second Amendment. Others stay out of the spotlight, avoiding any kind of public demonstrations.

Many go by aliases that reflect their militant stance.

“When Pain, Evo, J3, and myself rolled up at Southlake Mall and assisted the Morrow Police Department,” an unidentified man in the WNYC piece claimed, “we were in full battle rattle, and Pain even sighted in on somebody and they (Morrow PD) didn’t mess with us.”

The speaker was not identified in the story, nor was his connection to the Georgia III% Martyrs confirmed.

Loewinger asked Kemp whether she had seen any armed militia members around or at the demonstration. (She had not.) Kemp noted that the police presence was fairly light, that a high-ranking officer had given the marchers an escort, and that the event had a “joyous,” even “family” feel. She also supplied extensive audio from the march to WNYC to help convey the sense of the event but had no role in deciding which or how much of that audio was used in the report.

Listen to the story, which references the anonymous claim about Southlake Mall at 9:42:

Kemp did note a white mall security guard in a golf cart approach organizers and wish them well before the march. She did not observe anyone in the treeline surrounding the mall where marchers assembled and headed towards Mt. Zion Road, then onto Jonesboro Road.

The WNYC report indicates some militia members use tactics like getting on rooftops or staging a short distance from an event. Photos from the event reveal no person visible on the roof of Southlake Mall, as well as a mall security camera in the parking lot area where marchers assembled.

“We had absolutely no militia groups there,” Callaway said. “It was me and the sheriff (Victor Hill) and CCPD chief (Kevin Roberts) and Clayton State Chief Antonio (Long). We let them demonstrate peacefully and we were hidden behind the building in case we were needed. We had no issues that day at all.”

Callaway said that Long was with him in person, that Hill and Roberts were on the phone, and that personnel from all agencies were staged nearby.

A Georgia III% Martyrs spokesperson told Loewinger their group had not been present at the march.

According to the Georgia III% Martyrs’ Zello channel profile, “The GEORGIA III% MARTYRS is a state organization made up of patriotic citizens who love their country, their freedoms, and their liberty. We are committed to standing against and exposing corruption and injustice. We do not seek to incite a revolution. However, we will defend ourselves when necessary. We are not here to create violence. Violence should always be a last resort and even then should only be defensive in nature.”

The Clayton Crescent is pursuing sources for further information as to the anonymous claim.