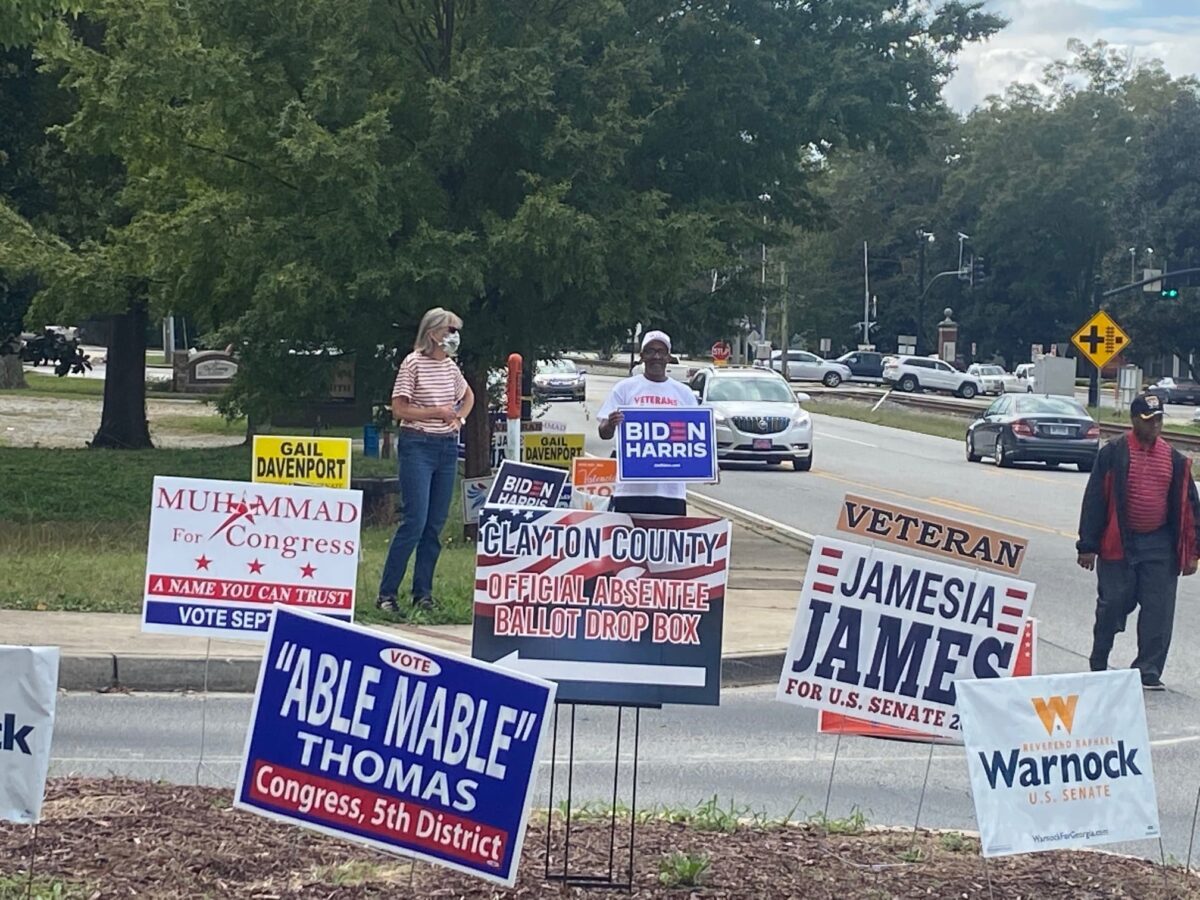 In Clayton, Fulton, and Dekalb Counties, the first day of early in-person voting drew thousands of registered voters to the polls. Many came prepared with folding chairs, snacks, and determination to stick out the wait.

At the Historic Courthouse in Jonesboro, the line snaked around the sidewalk, with many voters turning out before the 8 a.m. opening. People with disabilities and elderly voters were ushered to the front of the line. An Elections and Registration employee monitoring the line outside said it was longer than those when Barack Obama had run for President.

Statewide, the first day at the polls set a record for turnout–126,876 voters, according to Georgia Secretary of State Brad Raffensperger’s office. Attempts to reach the Clayton County elections office Tuesday for Monday’s turnout total were unsuccessful. Raffensperger’s office announced that more than 600,000 new voters have signed up since November 2018.

As of October 6, according to Raffensperger’s office, Georgia had 7,587,625 registered voters statewide:

The Historic Courthouse in Jonesboro had about 160 people in line around 12:30 p.m. People coming out of the courthouse said it had taken them about an hour and a half to two hours to cast their ballots. Other voters said they had dropped off paper ballots at the secure ballot box on the side of the building. The county elections office said it had placed several such boxes under video surveillance at county recreation centers. A county elections official said there were about 40 voting stations (touch machine and printer), with a couple of more accessible stations for seniors and disabled voters.

In Morrow, the line stretched from the community room at City Hall across the parking lot to the flagpole, about 60 people. Voters there also said it had taken them about two hours to cast their ballots.

In Rex, log lines at the Carl Rhodenizer Recreation Center prompted State Rep. Sandra Scott to post video complaints to Facebook. Scott, who is on the ballot in House District 76, called it “voter suppression.” One line for disabled and elderly voters stretched from the entrance to the side door, where a voter in a wheelchair was first told to get in the line, then let in. Another much longer line for everyone else stretched in the other direction, across the front to the building and looping back up through the parking lot. A voter who was leaving said it had taken her eight hours to cast her ballot–from 8:30 a.m. to 4:30 p.m. What appeared to be a Clayton County Elections ballot box sat outside the side entrance, wrapped in plastic. County officials had said those ballot boxes would be inside rec centers under security camera surveillance. The Clayton Crescent has asked the county Elections and Registration Office to explain why the wait was so long at Rhodenizer and why the ballot box was outside but wrapped up.

At the Metropolitan Library, 1332 Metropolitan Ave., Atlanta, the line was similar to that during the last election The Clayton Crescent saw there, about 40 people from the entrance stretching back to the parking lot fence. A man with a folding chair identified himself as an election observer from Fair Fight, an elections watchdog group run by Democrat Stacy Abrams.

At the Georgia International Convention Center in College Park, drivers had to follow a long series of arrow signs to reach the paid parking lot, where the gates were up and there was no charge to park. Many cars and SUVs found their way to sections D2, D4, and C2, but many more spaces were available. Inside, voters stood in a rope line, where a security officer said the wait was one and a half to two hours long.

Have you had any issues trying to vote? Tell The Clayton Crescent what you experienced, when and where you were, and what happened. E-mail KempWrites@gmail.com or securely text Robin Kemp on the Signal app.