The need is great: Hundreds line up for food in Clayton 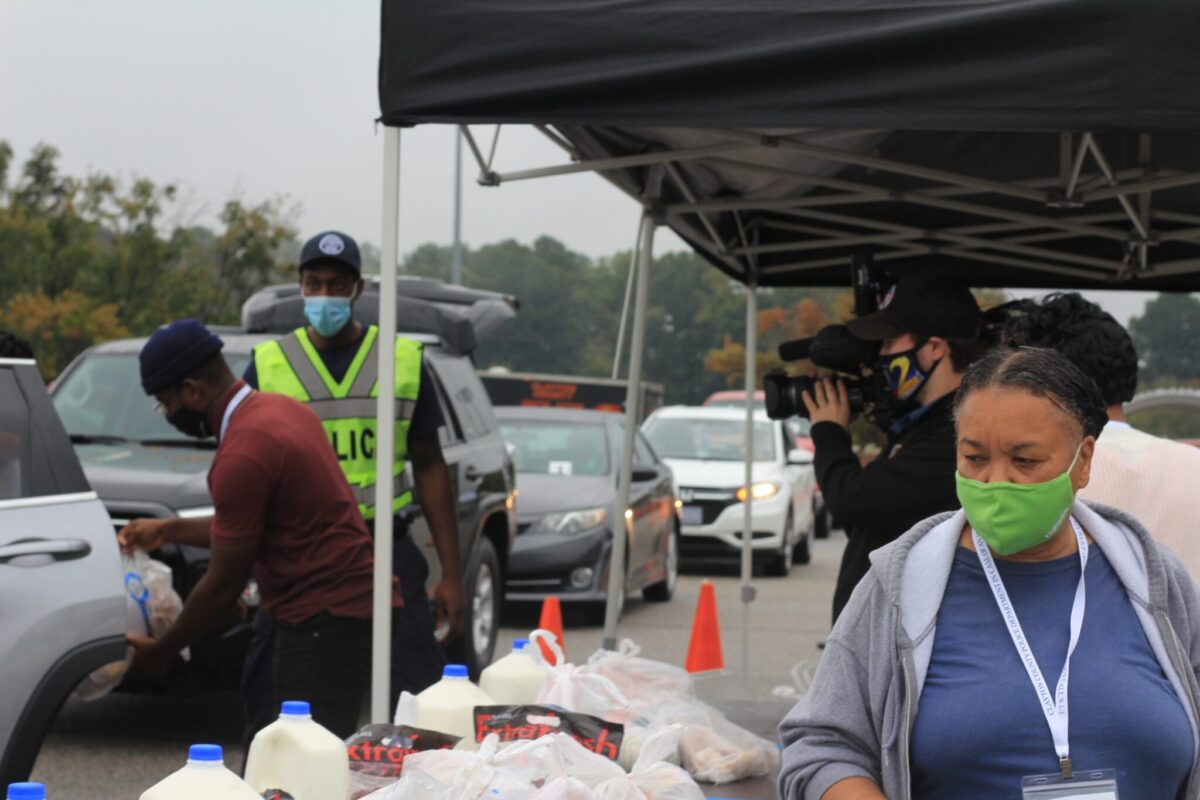 Two free food giveaways on Saturday, Oct. 10 drew hundreds of Clayton County residents. Those distributions were not isolated events. They have become a common sight since the start of the COVID-19 pandemic.

In the morning, lines stretched in three directions for the massive “Faith and Blue” food distribution event at Tara Stadium in Jonesboro. About an hour into the event, traffic from the stadium stretched back three-quarters of a mile–just a block short of Jonesboro Road. Similar long lines fed in from two other directions and the distribution itself was running a double line:

On Saturday, even those who have been lucky enough to keep some kind of employment were in line for help.

Misty, who works from home, said the food she got was “gonna feed me and my grandmother and my friend’s family.”

Filet of Chicken plant manager Amanda Duncan said her Forest Park company, which employs about 350 people, thought the event was a good thing and wanted to get involved. “Whenever Captain Robinson told us about it, we were super-excited to be involved in it,” Duncan said. The company donated 1,200 ten-pound bags of chicken–that’s 12,000 pounds of chicken alone–for distribution. The company processes a little over a million pounds of chicken each week.

“I just have a good relationship with Filet of Chicken,” Robinson said, “and I just spoke to them and got them out here.” He knows the need is great: “It’s tough. Tough on people. You do all you can do. They need to have a pull-up spot every week where they can get help. So we do all we can do.”

An impromptu food distribution took place later Saturday afternoon at San Felipe de Jesus Catholic Church in Forest Park. The food was to have been distributed the day before at the city’s Hispanic Heritage Festival, which had to be pushed back a week due to bad weather.

The USDA boxes contained a letter, in English and Spanish, signed by President Donald Trump. The investigative news site Pro Publica reports the letter angered 49 House Democrats, who sent a letter to Agriculture Secretary and former Georgia Governor Sonny Perdue on Aug. 14. They asked for information about how the letter got in there and warned it might violate the Hatch Act, a law that bans government officials from using taxpayer dollars to try and get people to vote for them. White House spokesman Mark Meadows said, “No one outside the Beltway really cares.”

Councilmembers Hector Gutierrez and Latresa Akins-Wells, along with volunteers from the Forest Park Women’s Roundtable, Muslims for Humanity, and United Voices and the City of Forest Park, loaded boxes into cars and SUVs.

Abdul Khan of Muslims for Humanity said, “Our organization is pretty much strictly a charity. Our main focus is programs like hunger prevention, which includes this USDA program through the Farmers to Families. This one in particular is coming through Royal, which is in Atlanta. And we do have other programs like family services, women’s shelters, our free clinics–anytime there’s a disaster or any type of hurricane,” including the last one, Hurricane Laura.

Khan said he’s done about 80 trips in the group’s truck for food distributions in otherwise-forgotten corners of metro Atlanta.

“The Farmers to Families program, it’s not necessarily getting to the right people,” he said. “I think we’re one of the only organizations that are making it our task to try to get it to locations where they really need it. For example, the East Point Mobile Homes here in Forest Park,” the Hispanic community in Dallas, GA, and Cobb County, as well as the refugee community in Clarkston, “all these different places where you wouldn’t potentially see them, we try to take it to those places.”

With only a couple of hours’ notice on Facebook, the 100 boxes, which contained staples like potatoes, milk, sour cream, butter, pre-cooked stew, and cabbage–were snapped up in about an hour and a half.

If you need food help, text “FINDFOOD” in English or “COMIDA” in Spanish to (888) 976-2232, then enter your address or zip code. You’ll get a list of the three closest food pantries within 10 miles of your area.