The University of Georgia Law First Amendment Clinic, in conjunction with media attorney S. Derek Bauer of Baker Hostetler, has issued a demand letter to the City of Forest Park over the city’s violations of the Georgia Open Meetings Act and the First Amendment. The Georgia First Amendment Foundation and Georgia Attorney General Chris Carr’s office are also monitoring developments. 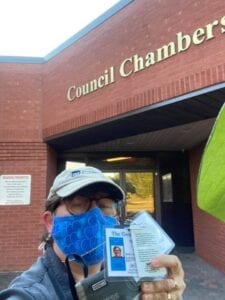 The Clayton Crescent’s reporter, Robin Kemp, was removed from chambers during the last two City Council meetings, Sept. 21 and Oct.5 when she tried to cover the meetings in person. On the second occasion, Kemp made a formal verbal protest that the move was a violation of the state’s Open Meetings Act, as well as of the First Amendment of the Constitution of the United States, which guarantees that governments may not regulate the press.

Under state law, any official government actions taken when the state’s Open Meetings Act has been violated “shall not be binding.”

The Clayton Crescent contends that the city has not provided reliable audio or audiovisual livestreams since March, when the city declared a COVID-19 emergency and shut down city facilities. Since then, other more heavily-used city facilities (recreation center, football stadium, other contact-sport playing fields, the amphitheater area where festivals are held, and food truck events) have reopened to the public. In some instances, photos and firsthand observation show social distancing and masks have not been uniformly enforced. In addition, members of the news media are classified as “essential workers.”

The city has said that council chambers and City Hall remain closed to the public due to COVID-19 “guidelines.” However, the city has continued to allow select members of the public, such as consultants, to enter chambers during open meetings. Elected and appointed officials and city staff have been observed doffing and donning or not wearing protective gear and sharing microphones in chambers during those meetings. Some seats in chambers have been clearly marked for social-distancing purposes and a sign on the front door of council chambers announced that masks are required.

“We write on behalf of Ms. Robin Kemp, a journalist who covers news in Clayton County, and who was ejected from two Forest Park City Council meetings in violation of Georgia’s Open Meetings Act (OMA), O.C.G.A. § 50-14-1, and the First Amendment of the United States Constitution. In further violation of these laws, the City of Forest Park (“the City”) has for months failed to provide the public with effective, synchronous access to its City Council meetings. We write in the hopes that these matters can be resolved without further legal action or the involvement of the Office of the Attorney General, with whom we have also filed a complaint.”

Separately, under the First Amendment, members of the public and especially journalists are guaranteed “‘the right to gather information about what public officials do on public property,’ even including a right to independently record matters of public interest.”

Because the city has repeatedly failed to provide a reliable means for the public to observe proceedings via teleconference, as other municipalities and county agencies have managed to do during COVID-19, while spending over $18,000 on a new television studio for what Butler described as public relations purposes, this point is of particular importance. An inaudible feed, a feed that has been edited by the government to remove unflattering criticism, or a feed that goes down effectively prevents the public from attending. That turns an open meeting into an illegally closed one should proceedings continue.

The letter makes several demands of the city:

The Clayton Crescent is pursuing the matter on behalf of the citizens of Forest Park, who are entitled to know what their government is doing. In addition, as a news agency, The Clayton Crescent has a legal and ethical duty to demand that government bodies follow the state’s sunshine laws and to stand up for the First Amendment.

The city has until Oct. 15 to respond to the demand letter.

After ejecting Kemp from the Oct. 5 meeting, incomplete recordings of the proceedings (which appear to have deleted Butler stating that the meeting was not open to the public, Kemp’s formal verbal protest, and Butler ordering Police Chief Nathaniel Clark to have Kemp removed by a uniformed officer) indicate an executive session may have been taken sometime between the public work session and the council meeting.

During that time, apparently a new item to consider reopening City Hall was added to the published agenda. The item was swiftly tabled as councilmembers asked Clark, who had also been functioning as interim city manager before Albert Barker, whether the reopening could be done administratively, so that councilmembers would not have to take a vote on the matter in public. Clark said that he had been in touch with Barker, who he said was “still under the weather,” and that an administrative solution could be possible, after the city takes safety measures.

Part of the problem with the council meetings being effectively closed to the public is that it has delayed coverage of more serious issues during this time. It appears from recent discussions about financial management during audible portions of the meetings from which Kemp was escorted that the city has no centralized purchasing system to track contracts and bids.

For example, James and other councilmembers have expressed displeasure with Barker’s performance during his short time as city manager. James has grilled Barker repeatedly, calling for greater openness and asking why Barker had not yet produced minutes from one of two June budget meetings. In response, Barker has told the council that he has “found every dime” and that some city contracts apparently “done went missing.” Mears, Gutierrez, and James have complained that they feel Barker is keeping them “out of the loop,” as Mears said. James also has asked Barker for a clearer accounting of spending on projects like renovating councilmembers’ offices next to the Senior Center in Starr Park.

In February, Butler has removed all members of the city’s Urban Redevelopment Authority board (after it refused to approve $20 million in bond financing for a proposed police headquarters building, for which members say no drawings or site plans had been produced, and other improvements).

Both the UGA Law First Amendment Clinic and Bauer’s firm are providing their services pro bono to The Clayton Crescent.