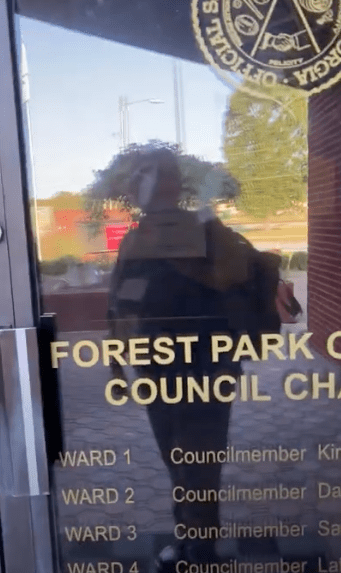 With a couple of exceptions (grad school, Lyft driving), I’ve been a reporter since 1986. I literally grew up in the news business. I am not a lawyer, but I am a journalist–and I know how sunshine laws work.

For the second time in two weeks, I was kicked out of a Forest Park, GA city council meeting, by police, at the explicit direction of the mayor.

I am a reporter for The Clayton Crescent, a new nonprofit news startup; I am known to city officials as a journalist because I covered them for two years at the Clayton News until COVID-19 forced layoffs; and I was there in my professional capacity to cover the council meetings.

In addition, city employees indicated on both occasions that the city is keeping an “approved” list of members of the public whom it will allow into chambers. (The city has yet to produce the list(s) pursuant to an Open Records Request and is quoting over $180 in “copying fees.”) The phrase “prior restraint” comes to mind.

The city claims chambers are closed due to COVID-19 “guidelines,” which–in direct contradiction of the city’s own stated policy–it has not enforced for some weeks in other city facilities like recreation centers, parks, city-funded festivals, and football games:

For months, the city has not supplied fully audible or viewable livestreams. Other local municipalities (Jonesboro, Morrow) and the Clayton County Board of Commissioners have figured it out and have also reopened their meetings to the public some time ago. The Clayton County Police Department checks the temperatures of members of the public entering police headquarters. The entire Georgia judicial system has figured out how to run Zoom Live meetings while preserving attorney-client confidentiality and public transparency. The Clayton County Board of Education conducts livestreamed meetings for the public and delivers class content to its students. Yet, week after week, the city of Forest Park makes “the dog ate my homework” excuses for its alleged lack of technical competence: malfunctioning microphones to be replaced, dropped livestreams, video with inaudible audio, audio with no video, promised livestreams in one location that appear in another.

Less than a week ago, the city held an impromptu tour for the public to see its new $18,000-plus, no-bid, 4K video production studio, paid for through the Downtown Development Authority, as freshly-produced video of the mayor and city officials touted the city as a prime business destination. This studio exists to dispel what Butler calls “untruths” about the city, with the mayor serving as talk show host. (She did not cite any specific “untruths” when asked.) When the Clayton Crescent asked whether any of those new cameras would be used to livestream council meetings, Butler said “No.” When asked whether the city would add cameras for that purpose to the recently-renovated council chambers, she said the idea was “under advisement.” (The council already has bubble cameras in the chamber ceiling and a 4-up monitor in the adjoining conference room–similar to the county Board of Commissioners’ setup.)

The Clayton Crescent contends that the COVID-19 “guidelines” to which Forest Park points do not supersede the Georgia Open Meetings Act nor the First Amendment, especially when reporters are essential workers, are following mask and social distancing guidelines, and are unobtrusive observers of elected bodies in action who literally serve as representatives of the public.

Apparently, the city added an agenda item after an executive session this evening, which would reopen City Hall to the people who fund it. That motion was tabled.

One councilmember, Hector Gutierrez, alluded to a “misunderstanding,” apparently on the part of this reporter, that such a closure would supersede the Open Meetings Act and the First Amendment. Another, Councilwoman Latresa Akins-Wells, asked whether the matter could be dealt with administratively so that elected officials would not have to take a (public) vote.

Later during the meeting, a councilmember joked about someone removing a mask during closing remarks. Wait, I thought there was an issue with exposing people to COVID-19 in chambers! I must have “misunderstood.”

Neither the mayor nor the police chief was wearing a facemask when I was ejected under the pretense that having a member of the media present would spread disease among city leaders.

COVID-19 does not grant a democratically-elected government license to suppress the public’s right to know or the freedom of the press to cover elected officials’ activity without prior restraint.

Forest Park may be a small town. The Clayton Crescent may be a small news operation. But the principles of open government and press freedom most definitely do apply to every corner of the United States of America. We do not live in a dictatorship. This is the kind of thing that happens in nations where I would be traveling by armored car and passing through military checkpoints.

Thanks to the University of Georgia First Amendment Law Clinic for taking this on pro bono. And thanks to my colleagues for your support in defense of sunshine.

Come check us out at claytoncresent.org.