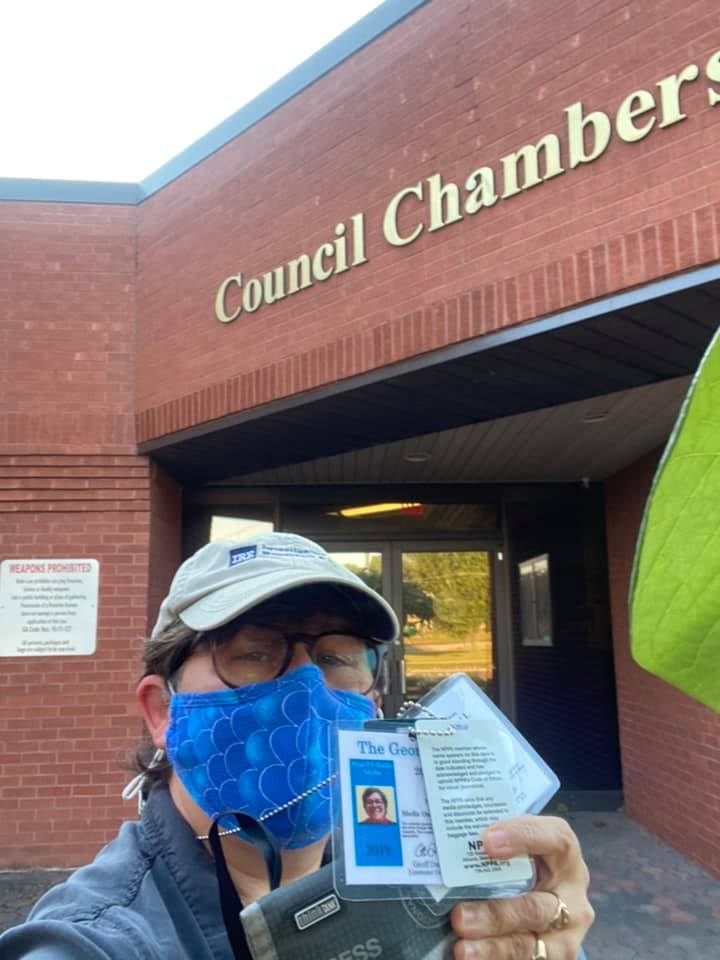 The Clayton Crescent was, for the second time in a row, removed by police from the Forest Park City Council meeting at the order of Mayor Angelyne Butler Oct. 5.

On Sept. 21, reporter Robin Kemp was removed from the regularly-advertised City Council meeting after entering the building, identifying herself to a police officer as a reporter who was there to cover the meeting, submitting to a search of her bag, and entering while wearing two masks and a filter against COVID-19. Kemp selected a seat that was isolated from others and not marked as blocked due to COVID-19 precautions.

At that time, Butler sent Police Chief Nathaniel Clark over to remove Kemp. When Clark said she would have to leave the public meeting, Kemp asked why. Clark said it was “at the request of the mayor.” Kemp then stated that she believed she had a legal right to attend the meeting under Georgia’s Open Meetings Act. She informed Clark that she would contact an attorney and the Georgia First Amendment Foundation for clarification. Clark followed her to the lobby, where Kemp repeated her intention to contact an attorney and GFAF to the officer on duty, then contacted counsel.

The city’s agenda had advertised a YouTube stream, a YouTube meeting archive, and a Zoom meeting where citizens might access the meeting. The links did not function when Kemp tested them. She found an incomplete Facebook livestream of the meeting. The agenda also had stated that the meeting was open to the public.

On Oct, 4, Kemp checked the agenda and noted the city’s previous wording about the meeting being open to the public had been removed. The agenda again advertised a YouTube livestream, later archived YouTube video of the meeting, and Zoom meeting information to watch or listen live.

On Oct. 5, Kemp returned to the meeting, wearing a mask, again found the outside door locked, and knocked. Forest Park’s Recreation and Leisure Services Director Tarik Maxwell opened the door.

“Did they….did they allow you in?” Maxwell asked.

Kemp then entered council chambers during roll call and chose a socially-distanced seat. Butler saw Kemp, then stated, “We are not open to the public.”

Kemp stood up and said, “My name is Robin Kemp and I am from The Clayton Crescent. I am a reporter. I’m here to cover this open meeting under the Open Meetings Act of the State of Georgia and according to the First Amendment of the Constitution, right here.” Kemp displayed a printed copy of the First Amendment in her press credentials holder.

Kemp is known to city officials as journalist because she covered the city for two years for the Clayton News until COVID-19 forced layoffs in April. To dispel any doubt, Kemp also was wearing 2019-2020 Georgia House and Senate press credentials, current and expired membership IDs from the National Press Photographers Association, and was carrying The Clayton Crescent’s valid corporate paperwork issued by the State of Georgia. She also had on a cap embroidered with the Investigative Reporters and Editors logo. (On Sept. 21, she was wearing a CNN40 anniversary sweatshirt for former employees, emblazoned with the words “The World Needs Journalists.”) Kemp’s car also was clearly marked, both with a PRESS badge on the dashboard and The Clayton Crescent’s website on the rear window.

Butler turned to Clark, apparently asking to remove the reporter. Clark gestured to Forest Park Police officer Mike Gentry, who was sitting in front of Kemp. Gentry got up, sighed, “All right, Ms. Kemp,” and began walking toward the exit.

“So you’re removing me?” Kemp asked.

“In violation?” Kemp asked. Gentry did not answer, but held open the door for Kemp to exit.

“Thank you. I will contact counsel immediately,” Kemp stated.

Other members of the public who tried to enter council chambers included:

The Clayton Crescent attempted again to monitor the proceedings remotely but was left in a virtual waiting room in the Zoom meeting from approximately 7:54 p.m. to several minutes after 8 p.m. However, the meeting appeared to reconvene from what may have been an executive session held between the work session and the official meeting (both of which are public meetings under state law) via Facebook Live. Sound from the meeting was so low as to be inaudible at points as the mayor and council moved quickly through the agenda voting on various items.

At one point, a new item had been added to the agenda–consideration of whether or not to reopen city facilities. The council voted to table the item, with Councilwoman Latresa Akins asking whether the change could be done administratively or if councilmembers had to vote on it publicly. Councilman Hector Gutierrez referred to “her” (ostensibly Kemp) “misunderstanding” that the city was closed because of COVID-19.

While city officials have repeatedly made the claim that city facilities are closed for health reasons to justify keeping the press and citizens out of council chambers, there are several inconsistencies with this claim:

Other journalists in metro Atlanta offered support for The Clayton Crescent, while citizens expressed anger at the council’s actions:

The Clayton Crescent is committed to providing news coverage of local government for the people of Clayton County and the Southern Crescent. You do not have to be a journalist to enjoy the protections of Georgia’s Open Meetings Act and Open Records Act. Learn more at the Georgia First Amendment Foundation.