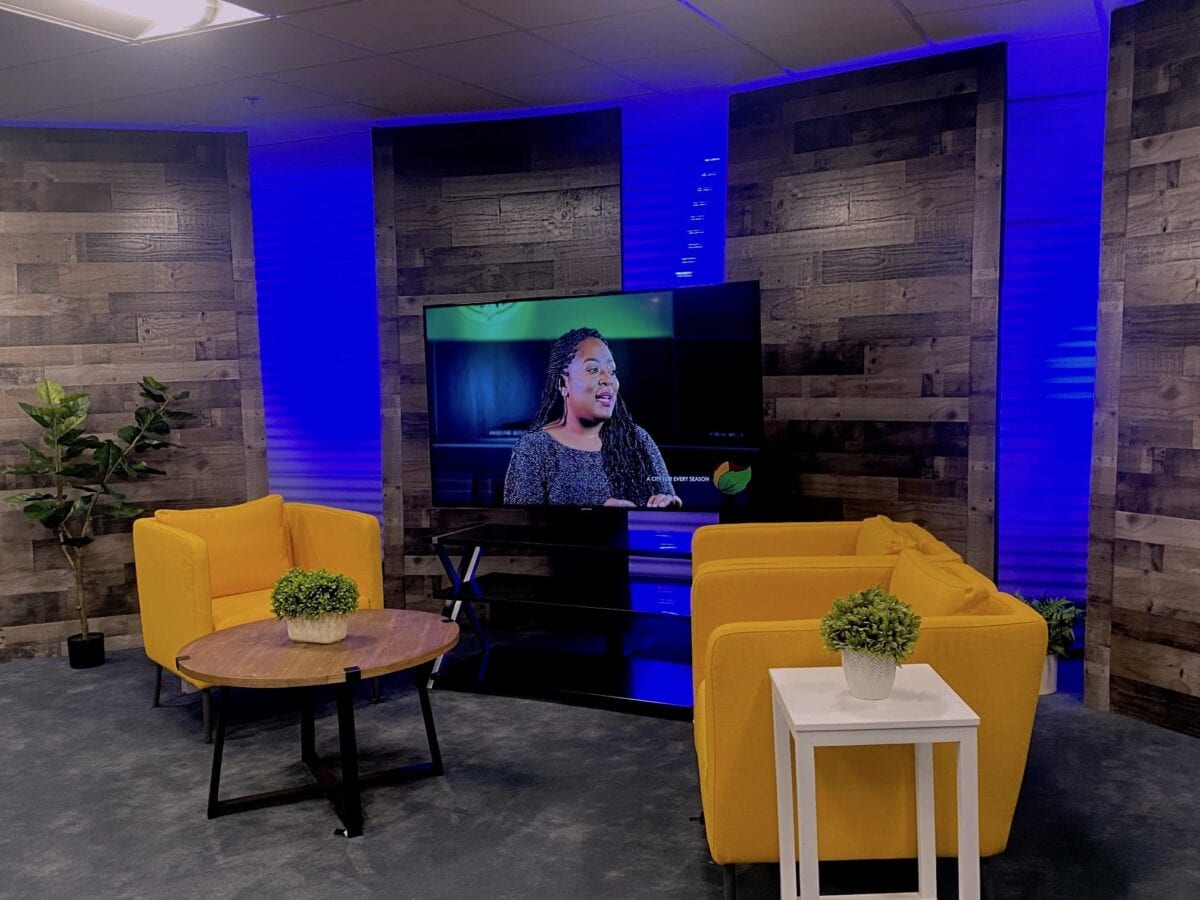 The City of Forest Park has spent an undisclosed amount of funds on a brand-new 4K television studio on the second floor of the Leonard Hartsfield, Jr. Community Center. Mayor Angelyne Butler said the video production facility is an effort to combat “untruths that people want to spread about the city.” When asked what some of those untruths might be, Butler said, “You name it.”

The city posted an invitation on Facebook Monday morning for residents to tour the one-room studio between 4 p.m. and 6:30 p.m. that evening. The studio consists of a small set where Butler will conduct talk-show-style interviews, a large monitor, two 4K Panasonic prosumer camcorders (retail about $2,000-$4,000 each) , Cayer BV30L tripods (retail about $150 each), a Mackie ProFX 12-channel mixer (retail about $350-$450), a Blackmagic ATEM Mini Pro switcher (retail about $600), and other gear. A video with commentary by Butler and other city officials ran in the background as citizens were given the tour.

A tour guide, Deacon Jones, said he did not know who was in charge of production–that is, the technical activities like shooting, editing, color correcting, and so on–at the studio. However, he said the mayor and council were running the studio.

The communications hub reflects a growing trend in Clayton County of elected and appointed officials who are producing their own video messaging. While Clayton County produces content for CCTV23, the government affairs channel that is part of most governments’ cable franchises, smaller jurisdictions like Forest Park, Jonesboro, and the Clayton County Police Department are producing video for social media in an attempt to reach citizens directly. This usually involves Facebook Live, but can involve more heavily-produced messaging, public relations, quasi-commercials for new businesses, and awards ceremonies. By comparison, video of governing body meetings almost universally is of more spartan quality.

It is not clear whether the city will allow residents to use the equipment to produce programming that reflects opposing viewpoints:

Butler has frequently referred to her desire to “control the narrative” surrounding city affairs since taking office. When Clayton Crescent asked Butler whether she would be running the show, she replied, “Yes.” Asked how much the new studio had cost taxpayers to set up, Butler said, “Well, I have to check, but it was right on budget with what the Downtown Development Authority said.”

A check of the city’s website shows no minutes from the Downtown Development Authority, nor does it show a request for proposals for the new studio and equipment. Minutes of the now-defunct Development Authority, which the city has not updated since 2019, show some members with terms expiring in 2021 and 2022. No page on the city website is dedicated to the new Downtown Development Authority. In January, Butler sent letters to all members of the Urban Redevelopment Authority, charging them with “dereliction of duty” for voting down a proposed $20 million bond request for a combined police and fire headquarters on Forest Parkway. Board members said they had not seen site renderings so could not approve the project. Police Chief Nathaniel Clark was both police chief and acting city manager at that time. Members demanded the mayor retract the letters and apologize. She did not and the board was absorbed by the DDA.

The Clayton Crescent has filed an Open Records request for minutes of all DDA meetings in 2020, as well as estimates and invoice(s) for all gear in the studio , the source of funds for the studio and gear, and the name of any production company involved..

Butler explained why the city built a television studio for her to host interviews: “So this is our communications hub. So this is the voice of the city, where we’re going to highlight everything positive associated with Forest Park. And we’re not going to chase any myths, but we’re going to dispel some of the untruths that people want to spread about the city.” Asked what those untruths were, Butler said, “You name it.”

Butler said the new equipment would not be used to broadcast city council meetings. Asked whether the city plans to add cameras to council chambers for that purpose, Butler replied, “That is under review.”

The Clayton Crescent is pursuing legal action, specifics to be determined, against the City of Forest Park after its reporter was ejected from the Sept. 21 City Council meeting by Clark, who said he had done so at Butler’s request. The city has not let the general public into City Council chambers since March, citing COVID-19 precautions and “technical difficulties” in providing audiovisiual access via various methods. The Clayton Crescent, which points to city recreational facilities and events that have been open to the public, as well as to surrounding jurisdictions that have restored public access to governing body meetings, is being represented pro bono by BakerHostetler over the issue. In addition, the University of Georgia First Amendment Law Clinic and Georgia First Amendment Foundation have expressed interest in the results of any legal action taken against the city in the matter.