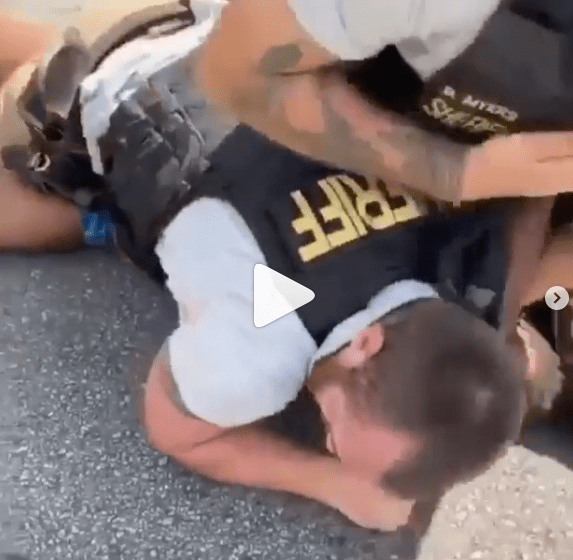 Clayton County Sheriff Victor Hill said he has fired one deputy who arrested Roderick Walker for “excessive use of force.”

In a Nixle post issued at 12:27 p.m. on Sunday, Sept. 13, Hill said, “The Deputy who repeatedly struck Roderick Walker is being terminated from the Clayton County Sheriff’s Office by order of Sheriff Victor Hill for excessive use of force. This is the administrative action. The criminal investigation of this matter will be turned over to the Clayton County District Attorney’s Office.”

Hill said Walker “has received medical treatment to include x-rays (no fractures detected) of his head and is being monitored at the jail hospital by a doctor.”

However, Walker remains in custody. Hill said he had “ordered a signature bond courtesy for Mr. Walker 48 hours ago [ed.: Walker was booked at 5:28 p.m. Sept. 11, according to online jail records].  Unfortunately, Mr. Walker has a felony probation warrant out of Fulton County for Cruelty to Children, Possession of a Firearm by a Convicted Felon, and a Failure to Appear warrant out of Hapeville which resulted in Magistrate Court denying him a bond.  Mr. Walker’s legal counsel will have to resolve these issues to secure his release.”

Eyewitness video from the incident shows a CCSO deputy wearing a duty vest embroidered with the name A. Myers repeatedly punching Walker in the face as Myers and another deputy lay on top of Walker to restrain him. CCSO has not publicly identified the deputy who was fired.

Walker and his family were passengers in an SUV for hire. He was arrested after asking deputies why he needed to show ID when they had pulled over the driver for an alleged taillight violation. In video posted to social media, the unidentified driver can be seen sitting in the SUV watching the officer beat Walker. Later, the driver is shown standing outside the SUV with his hands behind his back as if he were handcuffed. CCSO has not identified the driver nor said whether he was cited or taken into custody. Early reports that the driver was working for Lyft at the time of the incident were refuted by the company.

Shean Williams, a partner in The Cochran Firm, said during Sunday’s protest that Walker’s attorneys will try to get District Attorney Tasha Mosley to drop the case Monday.

During the protest, which drew about 80 people to the Harold R. Banke Justice Center, Riverdale resident Shalanda Price said the same officer seen punching Walker also had terrorized her family. We are providing unedited cellphone video of the speech as well as a transcription of Price’s remarks:

“On July 31, in the driveway of my own home, in Riverdale, Georgia, these same exact police officers who are seen on that camera, punching this gentleman, the exact officers ran up on my son as I was letting him out of the driveway to go to a meeting,” Price told the crowd.

“Because the Clayton County Sheriff’s Department always decides to set up roadblocks in front of my home. They had the entire street blocked. This officer ran up on my son, a gun to his face, cursing him. Me as a mother, I see this and of course it upset me. When I asked that same officer that was seen on the film touching my son, ‘Why are you talking to him? Why are you speaking to him? This young man has not even gone anywhere, did not even have the opportunity to put his car in drive.’ The officer told me to shut the f up. I don’t talk to him. If I don’t shut up, I’ll be next.”

“Another female officer that was seen on that same video that came later on to the scene ran up on me as I’m talking to a Black officer who’s trying to calm the situation, with her hand on the Taser and the cuffs, walked up to me directly and said ‘I’m about to lock your ass up.’ Upon my children running out and seeing this, do you know that these same officers attacked my sister who has MS, tased her twice in the driveway of my home, took my 18-year-old daughter who just graduated from high school, been in Air Force ROTC her whole high school career, pushed her, snatched her, handcuffed her. My 13-year-old, who was holding a one-year-old child, handcuffed her in my driveway. And the only reason my older sister didn’t get locked up is because she had enough sense to pull her phone out at the tail end of the whole situation, which it was filmed.

“He told her, ‘You are not in Fulton County. You are in Clayton County and we do what we want to.’ And that was this same officer seen punching this young man on the ground.”

–Shalanda Price, Riverdale, arrested in her driveway July 31 along with three family members

“And then upon all this happening, and they’re dragging us to the paddy wagon, Victor Hill comes to the scene,” Price said. “My sister begins to question him. He tells her to shut the f up, he doesn’t have to speak to her. His officers would not even give their names upon request. They took me, my 21-year-old son, and my 18-year-old daughter, and my sister to jail that Friday afternoon. We sat right here, in this jail, watching people, watching people who were being mistreated. I sat in a cell, and two cells down from me, a young lady was having a seizure. The same button that you’re supposed to call to get the officer’s attention for help, they ignored. They sit there and laugh. It took a trustee to run and tell the officer this young lady had been having a seizure for over three hours before they came and got her. Body limp, dragging her to the infirmary. So I know the injustice.

“And not even just that. Upon them releasing me, which it took hours after my bond had been posted, they release another female under my name, who didn’t have to give any identification, didn’t have to do anything but repeat my name. The same paperwork that they give you to hold onto your property, she didn’t even have to show it to them to receive mine, and walked up out of the door with all my property. And you know what the DA office sent me? They sent me a [inaudible due to crowd noise] to release statement to fill out, to try and get my property back.

“But what about the lives of my children that were affected? What about my 13-year-old daughter, who had to see her mother, her brother, her sister arrested? Her aunt arrested? And then they threatened to arrest her because she was holding a child when they attacked her. Oh! They were thinking about arresting her for child endangerment but you’re the one that is attacking us! In the driveway of my home!

“What kind of country are we living in, where police officers feel that they can do this to people? That they can brutalize people? Children? Families?“

“Mind you, before this incident happened, ten minutes prior to this incident happening, I spoke to the lieutenant that was on charge at the scene, to question why are all these police officers out here all the time? Setting up roadblocks? Why is it a paddy wagon at the end of the median of my subdivision? Why? They said they were looking for the killer of an Uber driver. But why did ten people ride up in the paddy wagon? A paddy wagon we stayed in for hours. Couldn’t hardly breathe. Drenched in sweat because it was so hot. But do they give a damn? No. Because you are just another number in Clayton County. Your officer even had the audacity to tell my sister, ‘If you don’t shut the fuck up, you’ll be next.’ And all she was doing was asking for his information.

“Because you know he told her, ‘You’re not in Fulton County. You are in Clayton County and we do what we want to.’ And that was this same officer seen punching this young man on the ground.”

“So you want to talk about injustice? What kind of country are we living in, where police officers feel that they can do this to people? That they can brutalize people? Children? Families? This man’s son, had he been the age of my daughters, he (the deputy) probably would have locked up. For running around and screaming and crying because his father was being beaten by the police. Because they did the same thing to my daughter. Eighteen-year-old girl, just graduated high school. Never been in trouble. I’m 41 years old, never been in trouble, never had any run-ins with the law, don’t have a record. My children don’t have a record.

“They sit up there and lie on the report that they filled out. Simple battery? How am I simple batterizing you when my hands are cuffed behind my back? And you look at me while you kick my sister in the stomach? Domestic terrorists is what they are.”

Price was charged with disorderly conduct, simple battery, and obstructing or hindering law enforcement officers. On August 3, her case was bound over from Magistrate to State Court. However, Price said, she has not heard anything about a court date and none appeared in online court records as of press time.

The Clayton Crescent has asked Hill’s office to confirm or deny Price’s public allegations, as well as to confirm the name of the deputy who was fired on Sunday. We will update with any response.