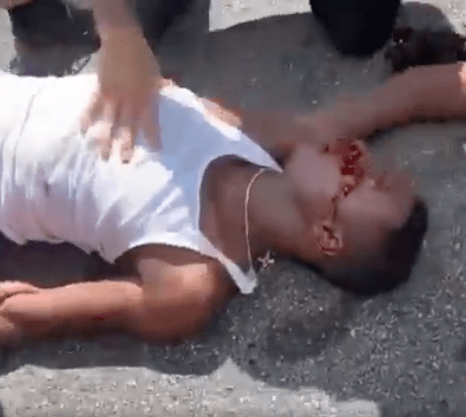 A coalition of Black activist groups including Movement for Black Lives and Georgia NAACP will rally at the Harold R. Banke Justice Center at 2 p.m. Sunday, Sept. 13 to demand Roderick Walker’s release on signature bond and Sheriff Victor Hill’s resignation.

M4BL is a national coalition based in Cleveland, OH of more than 50 groups, including the Black Lives Matter network and the National Conference of Black Lawyers. The coalition’s platform includes defunding law enforcement.

A flyer advertising the demonstration calls Hill a “domestic terrorist” and says “this rotten institution targets Black folks in Clayton (County) on a daily basis.”

Walker, who was beaten by two Clayton County Sheriff’s deputies after asking them why he needed to show ID after his driver was pulled over on a broken taillight, remains in jail as of 4:25 a.m. Sept. 13, charged with two counts of battery and two counts of obstruction of hindering officers. The Georgia NAACP is demanding Walker’s charges to be dropped and is joining M4BL in Sunday’s demonstration

Walker was arrested Sept. 11 outside the Georgia Department of Public Health Vital Records building, 1680 Phoenix Blvd., College Park, just off Riverdale Road where Phoenix Blvd. turns into Forest Parkway. He was granted $3,500 bond on each battery charge but denied bond on both obstruction charges at his Sept. 12 first appearance in Clayton County Magistrate Court. Walker’s preliminary hearing is set for Oct. 7 at 8 a.m. in Room 201.

“We call on Clayton County Sheriff Victor Hill to release Roderick Walker immediately and for the Georgia Bureau of Investigation to conduct a thorough and independent investigation,” the group stated. “We are currently meeting with the family to come up with legal support and next steps for community action.”

In cellphone video, which went viral after the arrest, two Clayton County Sheriff’s deputies can be seen restraining Walker as a third tells Janita Davis, Walker’s girlfriend who is shooting the video, “It’ll be OK.” The third officer’s body armor identifies him as D. Valentine of the COBRA Unit. COBRA handles drug and prostitution operations in what CCSO deems “high-risk” areas, claiming “over 2,000 arrests since it’s [sic] creation” and conducting “knock-and-talks (KATs) in reference to neighborhood drug complaints and unusual activities.”

“By already being in high risk areas,” CCSO’s COBRA webpage notes, “the units are close by to assisist [sic] with priority calls from other agencies and conduct Road Safety Checks.”

Deputy Valentine tells the woman, Janita Davis, who is calling out to Walker asking if he’s OK as she records the actions of the deputies, “Okay, you need to get back in the car and you need to pull the car over there. Ma’am! Get in the car before you end up in handcuffs. I’m not playin’.”

It is legal for citizens to make video recordings of police actions on the public street.

In another video posted to Instagram, Deputy B. Myers can be seen restraining Walker. He was not wearing a uniform but a t-shirt with a Grunt Style shoulder logo. This is the officer who appears to punch Walker in the face three times with his right arm, then strike Walker with his left elbow. Myers said “He bit me!” and shook his hand as if he were injured.

That video shows Walker’s young son standing on the street as his father is restrained, then running back to the vehicle. The child later is seen sticking his head out of the window, screaming, “Daddy! Daddy!”

Another video shows the driver step out of his black SUV, hands behind his back as if he were cuffed, talking to an officer. Myers shakes his left hand.

Then Myers, the unidentified deputy who also had been restraining Walker on the ground, and another officer stand a cuffed Walker on his feet. Walker kicks at the officers and yells, “Y’all did it! Y’all did it to me!” as a fourth officer joins the others trying to walk Walker to a CCSO patrol car.

“Back up before you end up in jail. C’mon,” Valentine replied. The man, who earlier had yelled, “Y’all got blood on y’all hands,” and “And you wonder why we say ‘fuck you’? Fuck the cops, man,” shouts and the video ends abruptly.

Earlier reports had stated that Walker was using a Lyft driver. However, in a Tweet pinned to its account, Lyft said, “We’ve been made aware of a disturbing incident in Georgia. While we confirmed this did not happen during a Lyft ride, we unequivocally stand against racism and unnecessary use of force. We are in contact w/ @Georgia_NAACP.”

CCSO’s Use of Force Continuum is as follows, according to its Rules and Regulations:

Any time deputies use force, “a written report will be completed giving all facts of the incident.” A Use of Force report must contain the extent and treatment of any injuries, the hospital where any injured people were treated, and the doctor treating them, if known, as well as the names and addresses of injured people and witnesses, and the number of shots fired, if any, with the reasons and circumstances for necessary firearms use.

CCSO defines “excessive force” as “any force used in excess of the amount of force reasonably required to establish control over or to prevent or terminate an unlawful act of violence.”

Deputies and CCSO employees are allowed to use lethal force when:

CCSO also defines “reasonable force” as “the force needed, superior to that force used by a subject, which will enable the officer to establish control over or to prevent or terminate an unlawful act.”

The videos begin after Walker is on the ground and deputies are on top of him. CCSO has not stated whether or not Walker had become combative with deputies after asking why they needed his ID. No body camera video or dash cam video has been released of the moments leading up to Walker being physically restrained and beaten. A source tells The Clayton Crescent that CCSO does not use either body cam or dash cam video.

In a post to Nixle at 12:29 a.m. Sept. 12, several hours after Walker had been booked into the Clayton County Jail, Sheriff Victor Hill said, “After being made aware of a video posted on social media involving a Deputy using physical force on a man, Sheriff Victor Hill ordered his entire Internal Affairs Unit to come in and begin an investigation that has been on going since 8pm.  The Sheriff has ordered that the Deputy involved be placed on administrative leave pending the outcome of the investigation.”

The post did not specify which of the three deputies seen taking part in the arrest had been placed on administrative leave, nor did it state whether the other two deputies are under investigation.

CCSO’s Rules and Regulations state that whenever officers are involved in “any shooting, serious injury either to an officer or another party, occurrence of death of an officer or another party, or serious property damage including county property, the respective Superior Officer shall be called; the crime scene shall be protected from all interference from anyone; in the event of injuries or death, the Internal Affairs Section, District Attorney’s Office, and County Safety Officer shall be notified.”

In addition, “No Sheriff’s Office employee shall provide any information, nor make any statements, to another agency or any other person until he/she has spoken with the Sheriff, Chief Deputy, their respective Major or the Internal Affairs Section.”

Section 7.03 of CCSO’s Rules and Regulations specifies that “Personnel shall not intentionally antagonize any person with whom they come in contact and shall treat all persons in a respectful, courteous, and civil manner. Any officer using his office with malice to oppress or persecute or annoy any person or persons may be subject to disciplinary action.”

The procedure for a deputy on administrative leave with pay includes turning in “firearms, credentials, vehicle, etc.” to the division commander and checking in daily by phone with Internal Affairs or the division commander. The deputy cannot work any part-time jobs “based upon their status as a sworn officer or employee of the Sheriff’s Office” nor “(a)ct in [any] official law enforcement capacity, except under subpoena, court order, or by direct authority of the Sheriff or Chief Deputy.” The deputy also has to follow “any specific instruction(s) provided to them regarding behavior and/or action, to include contact or communication with others, even where such other person may not be employed by the County.”

The Clayton Crescent has filed an Open Records Request with the Clayton County Sheriff’s Office for the deputies’ personnel files and disciplinary records, as well as records related to Walker’s arrest and jail intake. Online arrest records indicate Walker was booked into the jail at 5:28 p.m. on Sept. 11.

The Georgia NAACP is urging people to call CCSO at (678) 479-5300 and demand the deputies be fired, as well as District Attorney Tasha Mosley’s office at (770) 477-3450 and ask that the charges against Walker be dropped.

The controversy comes as Hill enters a runoff for reelection against write-in candidate Dwayne Fabian, a former Georgia State Patrol officer. Hill also has come under scrutiny for allegedly arresting and strapping a man into a jail restraint chair for several hours over a payment dispute with a sheriff’s deputy.

The Southern Center for Human Rights and the ACLU of Georgia also have filed federal cases against Hill, alleging unsafe jail conditions, price gouging, and inadequate COVID-19 prevention efforts. Hill’s legal spokesman previously stated, “There is no outbreak of COVID-19 in our facility.  The media has falsely exaggerated the facts to suit their story. As the Legal Advisor for the Clayton County Sheriff’s Office,  I have reviewed the allegations in the lawsuit, and we will vigorously defend against this lawsuit in a court of law, not in the press.” As of July 9, according to an e-mail from Clayton County Health District Chief Epidemiologist Dr. Olatanwa Adewale, 72 inmates had tested positive for COVID-19.

On Aug. 4, The Clayton Crescent reported on an April e-mail, included in federal court documents, that the Clayton County chief epidemiologist had sent to CorrectHealth medical personnel in April stating “officially, you guys have an outbreak going on.”

On Aug. 13, Hill announced that he had presented the jail’s contract physician, Dr. Charles Clopton, with an award for “keeping COVID-19 infection spread under 1%.” Hill said, “Numbers do not lie, but unfortunately some media outlets do.  Interestingly, the Clayton County Jail came under attack by organizations who filed frivolous lawsuits and some media outlets for having an alleged ‘outbreak’ of Covid-19.”

In that Nixle post, Hill also denied an inmate’s claim that another inmate was found dead on a toilet in his cell and that a corrections officer did not want to go get his body for fear of catching COVID-19. The Clayton County Health District confirmed to The Clayton Crescent that at least one inmate had died of COVID-19 on June 7. According to Hill, the inmate, who CCSO has not named, “passed away after being arrested for a murder at a assisted senior living center” and that Clopton had said the inmate “‘had multiple cardiovascular medical problems which contributed to his death.'” Hill did not say whether the inmate had been convicted of the alleged murder.

Walker’s arrest came less than one week after the Clayton County NAACP held a silent march and candlelight vigil demanding justice in the 2019 shooting death of Kenneth Herring.

In that incident, a white woman, Hannah Payne, followed Herring in traffic against 911 directions, cut him off, and brandished a pistol. Payne claims, through her attorney, that Herring shot himself in a struggle over the gun. Payne was granted bond twice and remains free as of press time. The case has been continued several times in the past year. Herring was shot about half a mile from where Walker was arrested.

Read a copy of the Clayton County Sheriff’s Office Rules and Regulations (147 pages):