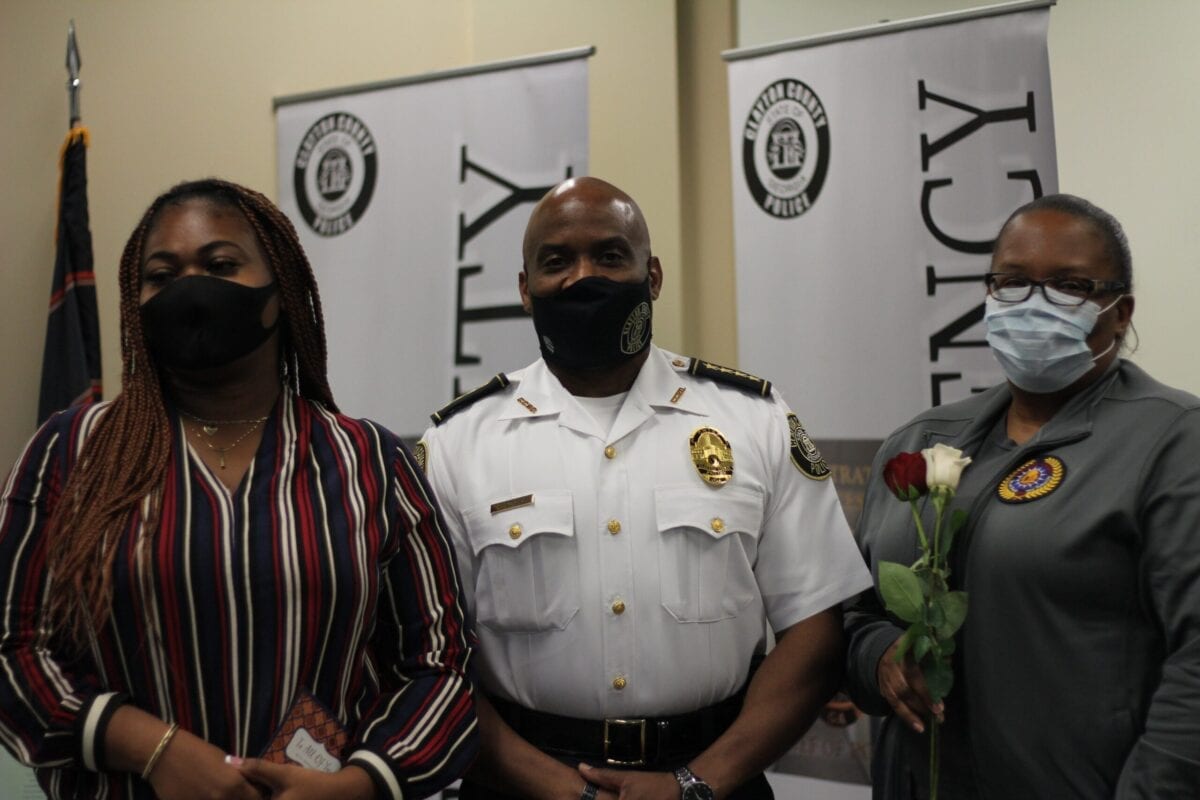 It was Thursday morning, August 6, 2015 just before 11:30 a.m. when a little girl, determined to save her mother from a butcher-knife-wielding husband, called Clayton County E911. The girl told operations manager Antwonette Boyer that she wanted to go help her mother. Boyer told her to lock the door.

It took the the child’s mother, Rahneika McQueen, five years, but today she was able to thank the Clayton County Police Department in person for saving their lives after her now ex-husband repeatedly stabbed her during a domestic dispute.

“It’s been five years since my ex-husband attacked me and tried to kill me,” McQueen said. “So I just wanted to thank the officers who were involved, just to close a chapter and, you know, let it go.”

Officers who had raced to McQueen’s Jonesboro home found her screaming “No! Help me!” As they tried to get inside, McQueen managed to open the door. Covered in blood from stab wounds to her neck, chest, and arm, she crawled to them as her attacker fled. Officers and a K-9 chased him down and slapped the cuffs on him.

That man is now serving hard time at Jenkins Correctional Facility—32 years—with a maximum release date of Aug. 4, 2040, followed by 35 years on probation.

Chief Kevin Roberts said he learned of the case, which happened before he became chief, after McQueen called to ask about thanking the officers and 911 operator who saved her life. He welcomed her efforts.

After McQueen handed a rose to each officer, Roberts in turn awarded McQueen in recognition of her survival.

He also awarded CCPD challenge coins to each of the officers who answered the call, followed by fist bumps.

McQueen read the text of a thank-you card to the operator:

“For the past five years I have wanted to reach out to the angels who saved me. I cannot thank you enough for answering my daughter 911 call and coming so quickly to save me. My life changed that day and I know that I would not be here if you guys didn’t show up. I am so grateful, I know with the climate in the world today police officers may not feel appreciated, but me and my family GREATLY appreciate and honor you for your service. God bless all of the heros who were involved in saving my life and letting me make it back to my kids.

Officer S. Hiers recalled, “The call went out as a domestic stabbing and units were enroute, priority one call. Officer Cook was the first one on scene, relayed info that the perp might be in the house. When I arrived on scene, me, Arnold and Godbolt cleared the location. The male suspect had fled out the location, I wanna say the back patio door, sliding glass door, and we started K-9, started detectives, and he was apprehended after a short foot pursuit, which was good.”

For McQueen and her family, today was a milestone.

“This was one of the last things I wanted to do, see everybody’s face, because I don’t hardly remember who was there—I just remember two particular officers I wanted to thank,” McQueen said. “But I see there were a whole lot more involved, so it was great just seeing their faces and telling them ‘Thank you!’”

“I’m proud of her. I’m very proud of her,” said Brittany Davis, clearly overcome. “I’m just thankful that they were able to get to her in time.”

“I feel grateful and happy,” Lisa Davis added. “My heart was just, I don’t even know. I always loved Clayton County….Nobody understands why I love them. I feel like I know them, I know them like family. I just feel like they didn’t hesitate to come save my baby. They were there in like three minutes.”