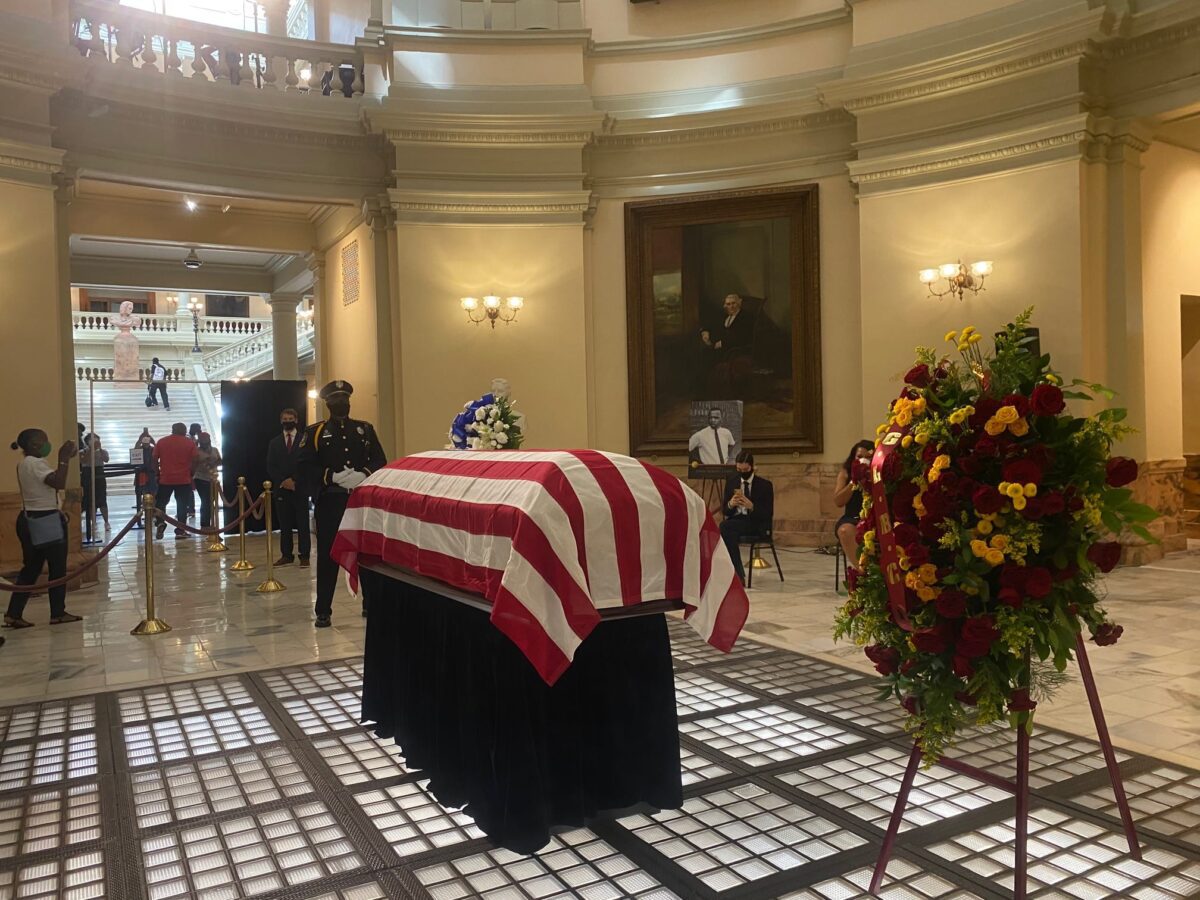 The sun swept a path for John Lewis.

People arrived, alone or with a child or several children in tow, gathering on the corners, waiting for the hearse. On the sidewalk across from the Capitol, reporters and photographers and producers staked out their spaces. Capitol Police roamed the street, reminding them to stay on the sidewalk.

Meanwhile, Lewis was making a final tour of Atlanta: a stop at the rainbow crosswalk at Piedmont and Tenth, the city’s gay Ground Zero; another stop at the mural depicting Lewis under the word HERO, where mourners have continued to pile up flowers since his death last week.

As he approached the Gold Dome, where he would be the first Black elected official to lie in state in the Rotunda, a military honor guard began its slow march down the steps of the Capitol to stand at the curb.

A phalanx of motorcycle police escorted the silver hearse bearing Lewis’ body under the hero’s arch.

A funeral worker from Willie Watkins opened the door and gently slid Lewis’ flag-draped coffin partly out of the hearse, just enough for the honor guard to take hold of.

Photographers documented the moment as the honor guard quietly took up its burden. A female funeral worker slipped her arm through the crook of a male colleague and they followed the pallbearers to the curb. The honor guard bore Lewis up the front steps of the Capitol to the Rotunda. As they passed, an oversized statue of segregationist Senator Richard B. Russell, who had lain in state in that very same Rotunda, gesticulated mutely.

Once Lewis’ coffin was inside, people rushed into the street, cell phones in the air, to photograph the hearse. They began to line up at the corner to pay their respects.

Everyone wore a mask. Those few who arrived without were handed one at the entrance. Each person presented a photo ID and had their temperature taken digitally. All bags went through the X-ray machine yet the line kept moving. Inside, rope lines guided the mourners into a serpentine holding pattern. The marble floors were free of social-distancing reminders. People stood about three feet apart in the air-conditioned Capitol.

On the edges of the rope lines, various elected officials dressed in black passed the crowd.

“How’s everybody doing?” called Michael Thurmond. Further along, State Senator Gail Davenport stood, looking at the crowd and greeting a constituent. A happy hum echoed through the space, yet most people were quiet.

A man in Sikh dress. A woman in black. A young mother in a bonnet and t-shirt with her children.

Black curtains blocked the view as the line approached the rotunda. As they passed, people stopped and tried to shoot photos of Lewis’ coffin, a glimpse from around the edges.

It took about an hour and a half. Then a woman greeted each person entering the Rotunda, and there he was.

“Snapshots, people. Keep it moving,” a man said as mourners pulled out cameras and cell phones to mark the moment. A deputy stood guard. Wreaths perched on tripods graced both ends of his coffin.

It seemed so small. Too small to hold that great expanse of soul.

And too brief. Could John Lewis ever have stayed long enough?

As people exited, two ladies at a table covered with memorial bookmarks urged, “Take one. Take a few.”

One side bore Lewis’ portrait, the words Keep The Faith, and the admonishment, “If Not Us, Then Who? If Not Now, Then When?”

On the other side was a photo of a young Lewis on the march and his familiar command:

“You need to get out there and push and pull. Stand up, speak up, and speak out. Sometimes you just have to get in the way to make a difference in our society. You must get in good trouble, necessary trouble.”

Outside, the line grew and the people kept coming.

Read about John Lewis’ days as a SNCC activist during the Civil Rights Movement.

Check back for more photos and audio from the event.