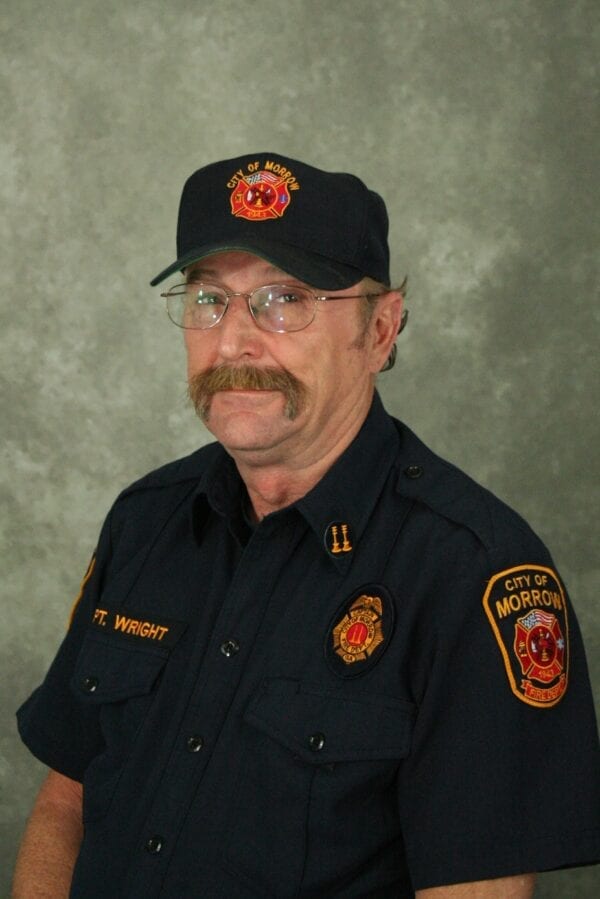 The Morrow Fire Department is mourning the sudden death of Captain Robert “Dammit Bob” Wright, 63, of Jonesboro. Fire Chief Roger Swint said Wright, who died July 8, had been with MFD since 1999 and that Wright had been looking forward to retiring on Sept. 1.

A viewing will be held Wednesday, July 29 from 6 p.m. to 7 p.m. at Dortch-Williamson Funeral & Cremation Services, 1410 Highway 138 SW, Riverdale. A Celebration of Life will be held in the same location on Thursday, July 30 at 11 a.m. The ceremony will be held outside. Wright will be buried at the Georgia National Cemetery, 1080 Scott Hudgens Dr. in Canton.

The Clayton Crescent asked Swint to tell us what Wright was like. His response was so eloquent and detailed that we reproduce it here:

Captain Wright was a dedicated public servant throughout his adult life.  After graduating from Jonesboro High School he joined the U. S. Army where he served his country from 1975-1991 obtaining the rank of Staff Sergeant.  Tours of duty include Germany and Korea with a combat tour in SW Asia.  He also participated in Desert Storm and Desert Shield.  From 1993-1999 he served in the Georgia National Guard with duties including Troup Senior Scout, Bradley Commander and Medical Section Chief.  He continued his service to country the remainder of his life by becoming an active member of the local VFW and American Legion posts in Jonesboro.

“He loved the atmosphere and camaraderie of the firehouse and enjoyed making everyone laugh but could also take a joke as well as anyone.  He had tremendous influence and respect from his coworkers, especially those that were new to the department or profession.  Many would refer to him as a mentor.“

In 1995 he received his State of Georgia Paramedic license after completing the Advanced Emergency Medical Technology program at Clayton College and State University with a 4.0 GPA.  After obtaining his Paramedic license he worked for Atlanta South Ambulance Company where he quickly rose to the position of Shift Supervisor.  He would continue to work in the private sector as a Paramedic long after joining the Morrow Fire Department.

Captain Wright was a stickler for details and kept records on everything he did.  When given an assignment he quickly jumped to action, organizing his crew to efficiently accomplish any task.  He was affectionately known as “Dammit Bob” by his friends and coworkers.  He loved the atmosphere and camaraderie of the firehouse and enjoyed making everyone laugh but could also take a joke as well as anyone.  He had tremendous influence and respect from his coworkers, especially those that were new to the department or profession.  Many would refer to him as a mentor.  Unfortunately, he did not get to enjoy retirement which he so looked forward to achieving.  He recently announced he would be retiring on September 1 of this year.

Captain Wright will be missed by all but we are all better people having known him.

A July 10 post on MFD’s Facebook page included a photo of Wright’s nameplate turned upside down under Engine 32 and the message “Bob Wright was the B-Shift Captain. Today is his shift. R.I.P Captain-we got it from here…..”:

The Clayton Crescent sends its condolences to Wright’s comrades at MFD, the VFW, the American Legion, and to his friends and family.