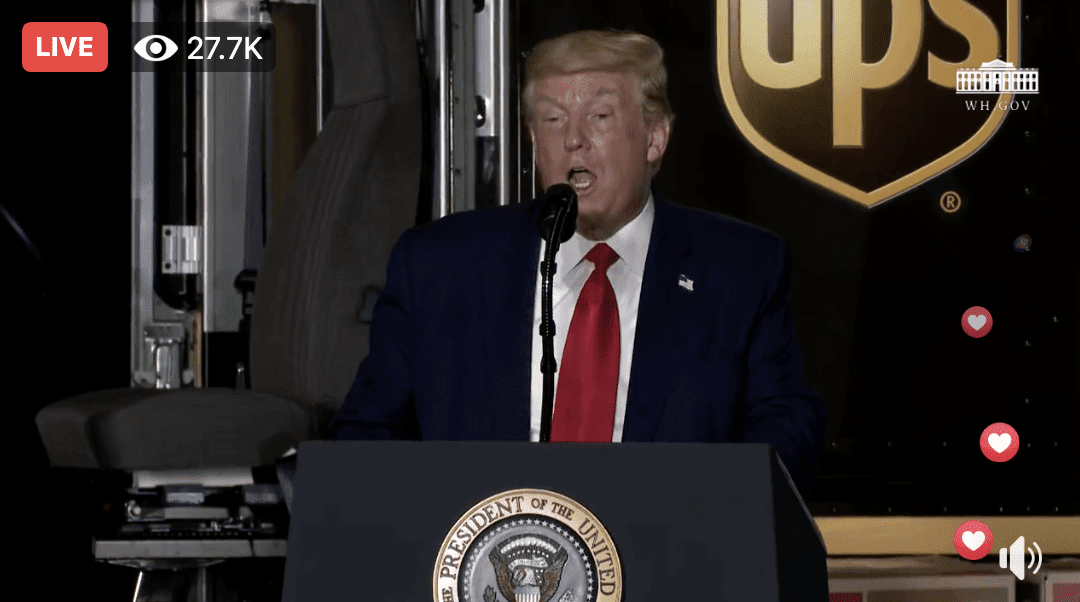 President Donald Trump landed at Hartsfield-Jackson Atlanta International Airport at 3:30 p.m. for a tour of the United Parcel Service Facility.

Kemp, who was wearing a mask, pulled it off to shout greetings at Trump, then shook hands with him. Trump did not wear a mask as he descended from Air Force One.

Trump alluded to Kemp beating “superstar” Stacey Abrams in the governor’s race and warned his audience about mail-in ballots. “As differentiated from absentee ballots…they’re going to be rigged,” he claimed.

Trump touted what he called a “One Federal Decision Policy” on large development projects — “a very quick yes or no” — rather than going through multiple regulatory agencies for approval.

He then called up UPS driver Julian Paulk, a professional driver and safety coordinator who started an employee health program 14 years ago at the Forest Park hub. Paulk explained the congestion issues with I-75. He said the construction project “opened up the bottlenecks” and made it easier to deliver packages.

Trump commented on a new lane for trucks along I-75 between Hapeville and Macon. Macon is a hub between Clayton County’s logistical areas and the Port of Savannah. Investments in the logistics, warehousing, and trucking sectors in recent years have put enormous stress on Clayton County roads.

“It should not take ten years to get approval for a simple stretch of road,” Trump said.

Georgia Department of Transportation Commissioner Russell McMurry thanked Trump for “another environmental process improvement that will make life a lot easier for us…to move that freight from Savannah.”

Trump took credit for speeding up improvements to the Port of Savannah.

Starting today, July 15, a three-mile segment of Forest Parkway just past Jonesboro Road is under construction, with one of two lanes closed in that stretch.

See who UPS is donating money to in this election cycle at opensecrets.org

A group calling itself Refuse Fascism called for a protest near the airport. The group also said it would pull down a mock statue of Trump at 5 p.m.in front of the Environmental Protection Agency Regional Office at the Sam Nunn Federal Center, 61 Forsyth St, Atlanta.