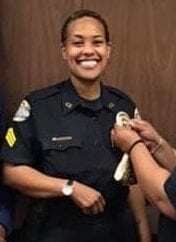 A roundup of headlines at a glance

Crimestoppers is offering a $10,000 reward for information about who shot and killed Secoriea Turner, 8, when her family crossed a vigilante roadblock Saturday near the University Avenue Wendy’s where Rashard Brooks was killed.

Turner was the cousin of the City of Forest Park’s business services specialist, Tiffanie Robinson.

Atlanta Mayor Keisha Lance Bottoms said during a press conference Monday, “You shot and killed a baby, and it wasn’t one shooter–there were at least two shooters.” Bottoms added that she had ordered people occupying the Wendy’s parking lot to leave: “It’s over.” District 12 Councilwoman Joyce Sheperd had been trying to broker talks between the city and members of Brooks’ family, including his sister, and other activists who had said they were “policing” the site. “At the request of Councilmember Sheperd, our public safety chair and our city council president, we had not completely closed the Wendy’s location yet,” Bottoms said. “Well, we’re not having any more discussions.” Soon after, a 53-year-old man was shot dead in the area and two other were wounded when a gunfight broke out. Police are seeking two suspects. One was described as wearing “all black dressed like a bounty hunter.” The other was described as wearing a white t-shirt. The shooting happened near 1238 Pryor Road where, police say, illegal barricades had been put up. Anyone with information is urged to contact Atlanta Police Detective J. Shephard at (404) 617-3012 or (404) 577-TIPS (8477). You can remain anonymous.

Members of the East Conley Zoning Committee fighting two illegal businesses in their neighborhood are preparing for another Zoom meeting on Tuesday, this time before the Dekalb Planning Commission.

In June, the Dekalb Community Zoning Board voted 7-0 to deny the businesses’ rezoning requests. The businesses, Atlanta Paving and Concrete Construction and American Shoring Company, had sought to be zoned into a different overlay district. Both have been conducting heavy industrial operations in a residential zone.

Residents say the businesses contribute to noise pollution and heavy truck traffic that their roads can’t handle. An employee of Atlanta Paving and Concrete said a nearby subdivision had sprung up after the business had been established. The businesses have been operating for years without the proper permits. An attorney for the business owners had submitted a letter asking that the zoning requests be withdrawn.

Participants are urged to mute their speakers during the meeting. The last meeting saw about 90 participants on the call.

At its July 6 meeting, the Forest Park City Council will take up several matters, including a proposed $115,000 zoning ordinance update by Michael Hightower’s The Collaborative Firm, Inc.; an ordinance declaring June 19 (Juneteenth) as a city holiday; a discussion of the Ethics Board with former members whose terms ended in January, including Karen Brandee-Williams; a change to the Ethics Ordinance to allow for one member to be

appointed from each council ward; swearing in of new Zoning Commission members; consideration of an emergency six-month contract for citywide sanitary service (for buildings, food prep areas, and police, fire, and city vehicles) by Safe Sanitizing Solutions of Jacksonville, Fla.; changes to Recreation Center hours and non-resident use fees; and disposal of assorted office furniture and old equipment.

To attend the virtual meeting via Zoom, visit

Over the Fourth of July weekend, the Clayton County Police Department responded to 78 calls of a firearm discharged. Four of those calls involved a person reported shot. Police say that was between July 3 and the morning of July 6 and attribute the high number to the holiday weekend. Lt. Cherie West said it wasn’t clear how many of those calls actually turned out to be gunfire and not fireworks. “That information is unknown as it is difficult to gauge,” she said. “That is just what the call came in as and, without speaking to each individual officer that responded to these calls, we would not have that answer. Of course the numbers are extremely elevated due to the holidays. This is not the norm.” Between 20 and 30 people were shot in metro Atlanta during the holiday weekend.

On the morning of July 3, the Clayton County Sheriff’s Office apprehended Willie Earnest Reeves, 26, of College Park, in South Fulton. Reeves was wanted as a suspect in a June 8 homicide. One victim who survived being shot told police that a marijuana deal allegedly had turned into a robbery and double shooting on Chaseland Court in Jonesboro. The other victim died. The Clayton County Police Department responded to the incident. Reeves is being held in the Clayton County Jail on felony murder, two counts of aggravated assault with a deadly weapon, armed robbery, and possession of a firearm or weapon during a crime. He was denied bond during a July 4 first appearance and has a preliminary hearing set for Aug. 3 and a bond hearing for Aug, 7, both at 8 a.m. in Room 201 before Chief Magistrate Judge Wanda Dallas.