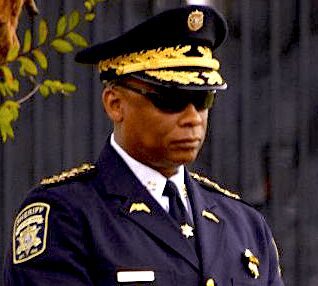 3:02 p.m.: UPDATES with PDF copy of suit filed in Northern District of Georgia

2:35 p.m.: UPDATES with names of plaintiffs, defendants; part of Clayton Crescent interview with inmate about COVID-19 in the jail

The Southern Center for Human Rights, the American Civil Liberties Union, and the ACLU of Georgia have filed a federal lawsuit against Sheriff Victor Hill and “several subordinates in his office” on behalf of four inmates at the Clayton County Jail due to COVID-19 exposure risks.

The Clayton Crescent also has spoken with two inmates who have alleged at least one person died of COVID-19 while in custody at the jail.

The federal lawsuit “asserts that the defendants’ disregard of the known risks of COVID-19 and its attendant illness and death exposes people who are incarcerated at the county jail to a highly fatal, infectious disease in violation of their rights under the Eighth and Fourteenth Amendments as well as federal disability rights laws.”

According to the ACLU:

“Plaintiff Randolph Mitchell is 72 years old and has a chronic heart condition. He is serving a 12-month sentence for a misdemeanor. During the first several months of the pandemic, Mr. Mitchell was refused a jail-issued mask; he instead wore a homemade mask made from underwear which he purchased from another detainee in exchange for two packets of soup.”

“Plaintiff Rhonda Jones is 58 years old and has chronic pulmonary obstructive disorder. She is awaiting trial and cannot afford to purchase her release on bail. She has been hospitalized twice for pneumonia in the past year. As the third person in a cell built for two, Ms. Jones sleeps on the floor near a puddle of foul-smelling water that leaks from the toilet. In a statement provided to the court, Ms. Jones stated: ‘I am scared that I could get sick and die from the coronavirus at this jail.'”

On March 27, 2020, at approximately 2:15 p.m., The Clayton Crescent filed an Open Records Request with the Clayton County Sheriff’s Department for the following information:

However, the Clayton County Sheriff’s Department did not provide that information. The Clayton Crescent has resubmitted its response for the data, which is not HIPAA-protected.

On June 24 at 7:59 a.m., The Clayton Crescent also requested information from Clayton County Board of Health’s Dr. Olugbenga Obasanjo, through Clayton County, seeking reports of “the number of cases reported, hospitalizations, and fatalities reported by the Clayton County Sheriff’s Office to the Health Department by date.” That request also was not answered.

When The Clayton Crescent asked Obasanjo directly for the information, he said, “There is no mandated reporting requirement from the jail or medical provider to Public Health. All positive tests are reported to us and we can share that data with you, also deaths. We are unable to know hospitalizations. Subsequent deaths following hospitalization will pop up for us if the cause of death is properly listed by the certifying physician. We do not have information on the conditions inside the jail unless invited in by the Sheriff. The Department of Corrections may have some insight.”

According to a press release from the ACLU of Georgia, “With nearly 2,000 detainees, the Clayton County Jail, located about 20 miles south of Atlanta, is the second largest jail in Georgia. It is also the site of a growing COVID-19 outbreak. According to the Georgia Department of Public Health, as of June 11, 2020, 45 people at the jail had tested positive for COVID-19 (32 detainees and 13 staff members). The outbreak is escalating with 16 new positive tests in the first eight days of June alone.”

“It’s no longer a speculation. It’s no longer something that we’re guessing among the inmates. We know that the coronavirus is running through the jail.”

— Inmate who spoke to The Clayton Crescent on condition of anonymity

Meanwhile, The Clayton Crescent has been looking into allegations by inmates that overcrowding makes it almost impossible to avoid exposure to COVID-19. Two inmates, who The Clayton Crescent is not identifying due to concerns they could face retaliation behind bars, allege that at least one inmate died of COVID-19 while in CCSO custody.

The inmate said “weekender” inmates must be dropped off and picked up by a family member. “What the concern is, with it running through the jail the way that it is, and then, you know, we could be bringing this back home, you know what I’m saying, to our families. And I’m not the only one.”

He added, “It’s no longer a speculation. It’s no longer something that we’re guessing among the inmates. We know that the coronavirus is running through the jail. Inside the jail, there’s no — there’s still a secret, the guards don’t want us to know.”

The inmate described a dorm with four pods that weekenders share with inmate workers. “There’s three pods of male inmate workers and we have a pod for the weekenders, the drug court participants and the work release participants. So it’s kind of hard to keep us from communicating with each other. And also, when we come down into intake, we’re left in intake every night for at least an hour, waiting for them to take us down. So that’s when we speak with the inmate workers, as well.”

In early June, the inmate said an officer was taking him to intake. “Lovejoy was dropping off a guy. And he seen us putting on our masks, because at this point now we have to wear a mask inside the jail. So he said, ‘Oh, y’all got the corona in here? Y’all got corona in here?’ The sergeant bring him in and told him, ‘No, we just trying to keep it out.’ And we all know that this is a lie.”

“The media has [sic] falsely exaggerated the facts to suit their story….we will vigorously defend against this lawsuit in a court of law, not in the press.”

“There is no outbreak of COVID-19 in our facility. The media has [sic] falsely exaggerated the facts to suit their story. As the Legal Advisor for the Clayton County Sheriff’s Office, I have reviewed the allegations in the lawsuit, and we will vigorously defend against this lawsuit in a court of law, not in the press.”

Listen to The Clayton Crescent’s interview with attorneys Kosha Tucker of the ACLU of Georgia and Sarah Geraghty of the Southern Center for Human Rights: https://claytoncrescent.org/2020/07/02/listen-attorneys-kosha-tucker-sarah-geraghty-on-clayton-county-jail-covd-19-lawsuit/