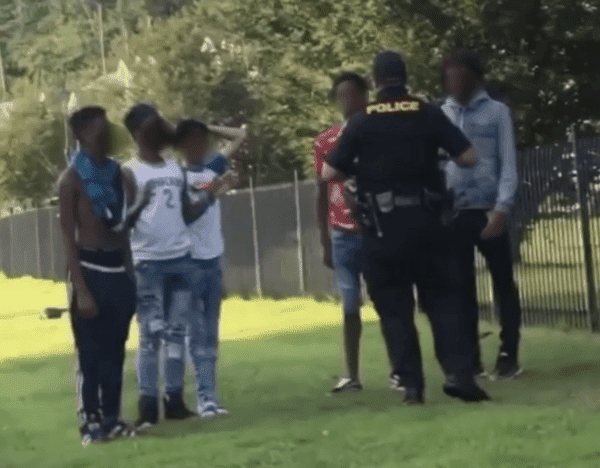 The Clayton County Police officer who pointed a gun at five Jonesboro teens last week broke his silence in an interview on the nationally-syndicated Rick and Sasha show June 24.

The interview started out with Chief Kevin Roberts praising the officer’s handling of the incident “at the highest level” and noting a social media campaign to flood CCPD’s phones with calls to fire the officer.

“After we put everything out and were totally transparent, there are still folks calling here, demanding that he be removed,” Roberts said, adding, “He’s not [going to be removed]. He did his job. Stop calling.”

Four minutes and 25 seconds into the interview, Rick and Sasha introduced the officer, who remained off-camera due to alleged death threats.

Sasha asked the officer whether, given what had happened with George Floyd’s death at the hands of police officers, he could understand why residents reacted as they did.

“What happened in Minnesota was a tragedy and it was wrong,” the officer replied. “However, that’s not the reputation of Clayton County, so it’s unfortunate that people would come to pre-notions and judgments of something that they didn’t even have no factual basis to make those opinions off of.”

Rick said, “At the end of the day, you’re a human being. What were you going through at that moment, with all of these people around you yelling? I mean, how did you manage to keep a cool head? Was there a part of you that felt a little uncomfortable as you were telling the people, ‘Hey, don’t worry about them?'”

The officer replied, “I wanted to keep the kids safe and me safe, but it became real dangerous with the crowd because now I had to shift my body and look back at them and make sure nobody from the crowd was gonna assault me or kill me, so it was one of those situations that made it extremely difficult, because instead of being good witnesses, and just recording the interaction and to make sure that everything was to satisfaction, a narrative started getting put out there that just put the whole direction of what I was trying to accomplish on another level.”

Sasha said, “I can’t imagine getting a death threat. I’m not sure if you’re a family man or if you have children. How are you dealing with that, and your family, right now?”

“Well, I have my department that supports me and they’re behind me,” the officer replied, “and my family understands what I do, so I have support from them. And it’s unfortunate, but these are the times that we live in, and we can’t let people dictate how we live our lives. So we just have to go about our lives like we normally would.”

Rick added, “I’ll tell you what’s also unfortunate is that the family did a press conference. And I understand the kid saying he was afraid for his life–he’s a kid….For the family to push it a little further, I think it was unfair, because when I saw that video, towards the end, then I wanted to give you a hug.”

“While the incident, viewed alone, initially was disturbing, that’s part of his job, and he’s trained to handle that. And when you talk to him, he’ll let you know in his words, sometimes, many times, the streets are not so forgiving. So you have to strike a balance between your safety and keeping everyone else around you safe, and that’s what he did at the highest level.”

“We can’t even put him on camera because he is getting death threats. And that is very serious. He has a family.”

–Sasha the Diva, Rick and Sasha

“What I thought was that it was a high-priority call, which dictated my response, but in the back of my mind, I did take into consideration it was children, and when I did encounter them, my first thought was to gain control. Once I gained control and compliance, I went to the low ready, and now my job was to make sure that they understood where I was coming from and to keep them focused on me and not for things to escalate.”

“It’s just unfortunate that the crowd came out of nowhere before I could even do my job and go into what I was doing and it just went left from there, you know?”

“I had a job to do and that was my overall purpose and mission. So my focus was on the kids and dispelling this call that we had got in regarding teenagers brandishing a weapon in front of a convenience store on a busy intersection.”

“It’s unfortunate that the family went to [the] press because that young man in the video, that weapon was tossed to him. But that’s neither here nor there. The thing that really disappointed me was that the child didn’t go home and tell his parent about what had transpired, he was so traumatized.”

“I wanted to educate them and provide them with guidance because these are rough times that we’re in right now, and I don’t think it’s beneficial to be out there with a replica weapon that looks very authentic, where an officer would have to make a split decision and decide it’s not. So I would hope that parents would take accountability and notice of that….we don’t need tragedies to unfold.”