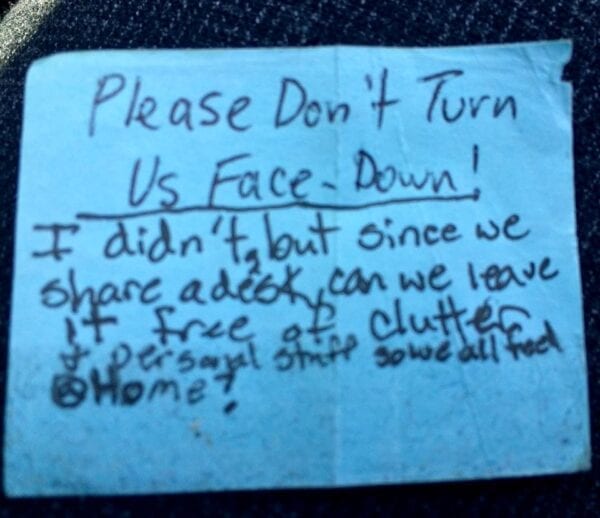 I carry a piece of paper in my wallet.

It’s a note that an unknown coworker at The Weather Channel left on a photo of me and my partner.

My supervisor at the time had suggested that people on our team, who shared desks across shifts, personalize our spaces. She repeatedly urged me to put a photo of myself and my partner on my desk.

Although I have been out of the closet since I was 16, I was reluctant to do so. I was making good money, had been out of the TV news business for a number of years, and needed to take care of my partner, whose health was deteriorating. I also had medical needs and was grateful to have health insurance after a number of years without it. The vibe at TWC was decidedly conservative and I didn’t want to be the target of other people’s prejudices while establishing myself as a ticker producer after an extended grad-school hiatus. I was there to do my job. I also wasn’t going to pretend to be someone I’m not.

It’s an old story that I always think will end differently.

Finally, thinking my supervisor’s repeated prodding about the desk photo made her a supportive ally, I put a framed picture of us at the Key West 90 Miles to Cuba marker at my station. It’s a meaningful photo because my partner fled Cuba where, she believed, the government was about to persecute her for being an open lesbian. Someone came to her and said, “They’ve opened a file on you.” This was at a time when Cuba was notorious for its antigay repression. (The government’s official position has changed somewhat since but homophobia remains rampant.) She had to leave her partner of many years, all her books, her dog, her family, change her name and appearance, move around, and wait until she had an opportunity to flee the country. Eventually, she seized that opportunity and won asylum in the United States. Sadly, although she came to this country to be free, as a lesbian and as an immigrant, she has found her welcome often wanting, and she misses a home to which she can never return.

When I came into work, I found our photo face-down. Day after day. Every day. For a year. No one else’s family photos were disrespected in this way. Finally, I stuck a Post-It note to the frame, reading “Please Don’t Turn Us Face-Down!”

The next day, I came in and found my photo face-down again. Someone had written a response under my plea:

“I didn’t, but since we share a desk, can we leave it free of clutter and personal stuff so we all feel at home?”

I complained to my supervisor and to HR. They did nothing.

When I was a writer at CNN in the 1990s, during the Don’t Ask, Don’t Tell debacle, an editor I respected (who was much older and a veteran) shouted out one night, “Now hear this! All faggots over the side!”

For the first time in my work life at CNN, I felt abject terror. (This was on top of daily ongoing harassment by a closeted supervisor who, I believed, was afraid I would out her.) A few years before, one of my closest friends growing up had been run out of the Marine Corps, reportedly for being gay. She later committed suicide. To have to put up with this blatant homophobia at work was just too much.

I called a meeting of several gay employees and formed TurnOut, which is to this day Turner’s LGBTQ employee group. In the 1990s, employee groups were how gay people banded together to demand healthcare coverage for our partners and for employees with HIV.

Fortunately, under Tom Johnson’s enlightened leadership, TurnOut was welcomed as a diversity partner. African-American employees also had grievances with certain editorial decisions, so we joined forces. I wrote and coproduced the LGBT segment of CNN’s in-house training video, “Through the Lens,” which addressed ways to avoid stereotypes in news coverage—things like showing only black men in handcuffs or gay men in leather or drag at Pride parades to refer to larger, unrelated stories about crime or gay rights. It was required viewing for all CNN employees.

So to be targeted at The Weather Channel, specifically and personally, for my sexual orientation by an unknown coworker, and not to have any disciplinary action taken against that individual (that I know of) was more than a shock.

After all, this is work, not the street, right?

I’ve been called “faggot” and had bottles thrown at me while walking down the street at night. I’ve had a complete stranger, apparently triggered by my short hair and a black motorcycle jacket I was wearing at the time, say, “I rebuke it!” to me in the dollar store. (You rebuke “it?”) On my otherwise-tolerant street, a neighbor has snatched her kids away from where several of us were chatting across the fence, saying, “I just don’t want her to be around certain people.” Of course I’ve been called “dyke” and similar epithets more times than I can count. And I’ve been among entire bars of lesbians who have poured into the street in New Orleans to chase down assailants who preyed on women leaving the club. In recent years, after the Pulse nightclub massacre and an assault at Piedmont and 10th, about which Atlanta Police did exactly nothing, I, a pacifist who respects my family’s 250-plus years of military service to this country, learned how to shoot.

How do you remember your first semester of college? I was run out of my own dorm room at LSU simply for existing. My lesbian roommate (who was strictly a roommate, not a girlfriend), afraid of being outed, told people on our floor that she wasn’t gay, but that I was. Imagine walking down the hallway as a college freshman as the open doors shut, one by one, as you commit the crime of walking to your room. (Alone, if that’s your issue.) No one at LSU would help me. It took a call from a local lesbian attorney for me to be able to get back in my own dorm room.

I’ve had straight men hit on me, then double down when I told them I was a lesbian, or joke that they, too, are lesbians. (Nope. No toaster oven for you, pal.) I know personally and know of many people who have been shot in the face, beaten up, or raped for being gay. I’ve brought meals to, raised money for, and mourned gay men, some of whom couldn’t even get medical care in the early days of the AIDS crisis due to fear and ignorance about how the virus is spread. I’ve been to more funerals than weddings in my life specifically because of AIDS. And I’ve had job after job that starts out promisingly, only to end in vague complaints about performance that managers never clarify and a “damaged goods” label that’s nearly impossible to remove.

It wasn’t long after my desktop photo became an issue at The Weather Channel that my job performance was called into question. I was pulled out of my workspace in the middle of the shift for all to see, where my supervisor asked me if I had a drug problem. (I don’t. Never have.) I was the only employee who was not afforded a computer and desk space when the newsroom underwent remodeling, forcing me to work from my personal laptop in the cafeteria during my shift. And on and on. Meanwhile, straight employees drank alcohol in the newsroom and engaged in various kinds of fireable offenses, all without any apparent discipline taken against them. To the contrary, the worst offenders were rewarded with promotions and plum assignments.

When The Weather Channel laid off dozens of employees (nearly all of whom were 50 and older—I know, because I requested the list), I was one of the casualties. I didn’t sue because I needed my severance pay, because I had no money for a lawyer, and because no lawyer I spoke to would touch a case against the network.

And that’s how employers get away with it. They have deeper pockets than you do. Bostock filed pro se.

LGBTQ people are well familiar with managers saying things like, “You’re just not a good fit” or finding fault with a small mistake when HR decides it needs to start “building a file” on you—not unlike what the secret police did to my partner in Cuba, and apparently not unlike what Clayton County did to Gerald Bostock.

So today’s Supreme Court ruling means the world to me, both personally and professionally.

It means that pretextual moves about alleged drops in job performance—minor gaffes or errors that straight coworkers would never fear losing their jobs over—are no longer a trump card for homophobic supervisors who want to get rid of an employee who is lesbian or gay or bisexual or transgender or who they suspect of being any one of those things.

I don’t know Gerald Bostock. I only know about his case and his claim that he was fired on a pretextual allegation that he had misappropriated court funds in the course of recruiting CASA volunteers during Hotlanta softball events. But I do know what it feels like to be let go on a pretext by a person who you just know in your gut doesn’t like you because you are gay.

Long-debunked prejudices—that gay people are child molestors, that transsexuals will attack people in restrooms—still thrive in Clayton County and elsewhere. This prejudice always comes into play when LGBTQ people work in any job involving children–like teaching, or raising money for CASA, a job where the word “recruiting” is freighted with bigotry against gay people when crime statistics clearly show the overwhelming majority of child molestors are heterosexual men.

One only need look at the case proffered on the county’s behalf, or read toxic social media commentary, or listen to the whispers behind closed doors, where people who give in to ignorance show their true colors. One only need hear the specious claims that LGBTQ people are “hijacking” America’s civil rights movement, implying that all gay people are white and privileged, that white LGBTQ people have not fought for black Americans’ civil rights, that we do not have to watch our backs every waking moment of our lives, that we “choose” to be gay and can “choose” to be straight, that “passing” by adopting conventional dress for our prescribed gender roles will keep our jobs and our bodies safe, that we are “flaunting our sexuality” if we place a rated-G photo of our partner on our desk, that we are not harassed, fired, beaten, raped, murdered, simply because of who we are, how we were born, or the fact that we breathe air, love, and go to work to pay our bills and to take care of our families.

Today’s ruling in Bostock v. Clayton County is a vindication for me and for everyone like me who works hard for a living and who takes pride in both our job and in who we are.

I don’t need a Supreme Court ruling to affirm my inherent worth and dignity or The Weather Channel to tell me which way the wind blows.

Unfortunately, far too many employers do.