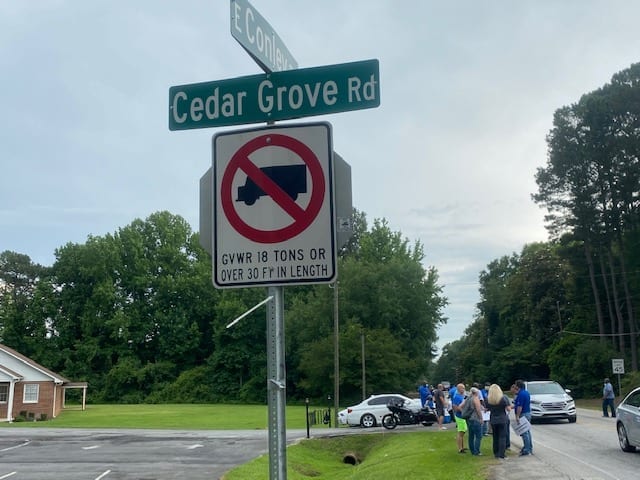 This is the first in a series of reports on Conley’s zoning issues.

About 100 Conley residents gathered to protest at an intersection they say is plagued with big-rig traffic that’s not supposed to be there, as well as to voice their opposition to two industrial businesses that have been operating illegally for years in a residentially-zoned area.

Conley has no city government and straddles Clayton, Dekalb, and Henry Counties. The issues today focused on Dekalb County at the intersection of East Conley, Cedar Grove, and Moore Roads. Five Dekalb County Police units pulled up to the protest–not to arrest demostrators but to issue warnings to truckers who cut through the neighborhood despite clearly-posted weight and trailer length limits.

“No big trucks! No big trucks!” the crowd chanted whenever a tractor-trailer rolled through. When a Dekalb County police officer stopped a truck to talk with the driver, the crowd went wild. whooping, hollering, and chanting “Write tickets! Write tickets!”

“If you are not on our e-mail list or phone list, please get on it,” Dr. Juaney Lynn-Rigsby exhorted the diverse group of neighbors. “Look at the sheets of paper you have in your hand, make sure you go to our website, if you can’t remember go to East Conley Zoning on Facebook.”

Residents of several subdivisions in the impacted area have been fighting to protect their peace, quiet, and property values. They say a nearby bridge over the Norfolk Southern Railroad track was closed due to structural damage from trucks that are four times as heavy as the bridge was designed to handle.Another issue that has residents angry is the presence of two heavy industrial businesses on land that is zoned residential. On the site of one, Atlanta Paving and Comcrete Construction, a paving and concrete company, residents say a lake that locals grew up swimming in has disappeared. They claim the owners filled it with debris. Across the road is American Shoring Company, which neighbors say is full of heavy machinery but sits on a longtime residential property.

The residents want to know why Dekalb County zoning officials have allowed these two businesses to operate without proper zoning and paying residential property taxes all these years. The businesses are seeking to have their properties rezoned. The residents are demanding the county shut them down.

Lynn-Rigsby said, “Dekalb Commissioner Larry Johnson, Georgia Representative Bee Nguyen, and Georgia Senator Gail Davenport have agreed to come and talk with these citizens. State leaders have been asked for assistance, as Dekalb County has not been responsive.”

The businesses are asking Dekalb County to grant them a zoning change, which Lynn-Rigsby said “comes after the businesses were fined for operating illegally. These companies have been operating in this residential zone with the county insisting they have no procedure to make an illegal business cease and desist.”

The Clayton Crescent was unable to reach the business owners for this story. However, a foreman at Atlanta Paving did say that the company is removing its equipment from the Dekalb County site and moving it to a property in Clayton County.

“We have a lot in Clayton County over on Church Street,” he said. “But our problem is, we leased it out. And we didn’t renew their lease, but in December we give ’em two months’ notice, the corona come up, and everybody’s gonna extend everything, but they ain’t gonna extend nothin’ for us. So that’s where we’re going. We’ve been fighting this about a year.”

The foreman said both companies had been there longer than a nearby subdivision and that a woman has lived in a house on the Atlanta Paving site for about 15 years, and that her husband, a former employee who suffered from lung cancer, died about two weeks ago.

He pointed out a green Cease and Desist Order sign on a post at the entrance. “That green sign is from Dekalb County, Them orange signs is from all the neighbors around,” adding his company had removed the orange zoning hearing notice signs.

The foreman also stated that he had driven through about 75 neighbors protesting at the intersection, that they were all black, and that the residents were picking on the two companies because the owners were white.

He added that the company was in talks to sell the Conley property to a developer.

“Fill ’em up with Section Eight,” he said.