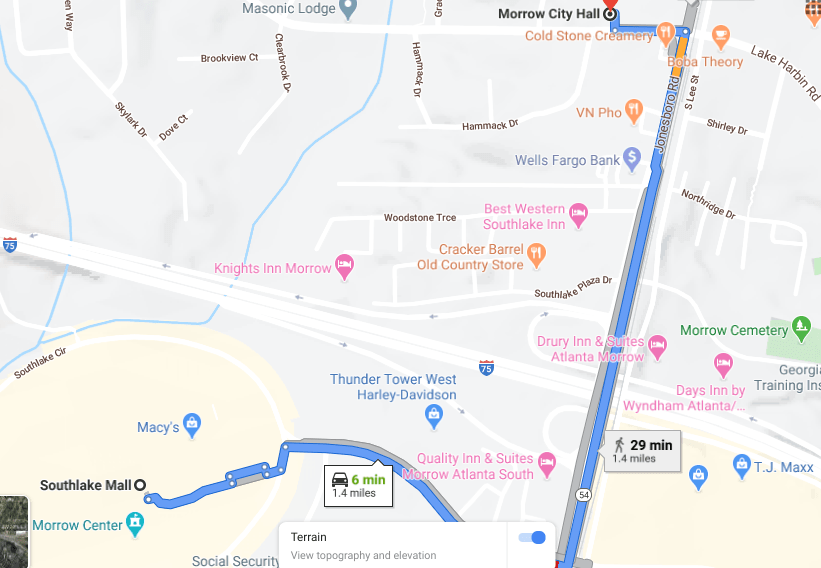 An organizer for the Black Lives Matter march planned for today (Sunday, June 7) in Morrow says the destination has changed to Morrow City Hall.

Organizer Lanique Spriggs-Green, 20, who lives in Morrow and is a pre-med student on the dean’s list at Oglethorpe University, said the change is “because the shaded area near the Vets Memorial at City Hall provides a more spacious platform for speeches.” The other person planning the march is Alicia Jones, 19, of Conley, who is a criminal justice student at Clayton State University.

Originally, the march was set to end at Southlake Discount Mall on Tara Boulevard, where organizers had informed local small business owners of the event by handing out flyers.

Spriggs-Green said the march will start at the parking lot in front of the Southlake Mall food court at 2 p.m., turn left onto Jonesboro Road, and end at Morrow City Hall. “Southlake is just the designated gathering spot because of its massive parking lot, nothing more.”

Spriggs-Green says she and Jones are not associated with either faction of the Black Lives Matter movement in Atlanta, which split a few years ago. She said she wanted to take action in Morrow, where she has lived for eight years.

“I haven’t been hearing of any protests locally, so honestly, I got tired of waiting around for someone to make a move first,” she said. “Instead, I chose to invite the public to march with us.”

Community activist Timothy Kenney said no one from the march had reached out to local political groups to inform them of the march or to talk about forming a coalition.

“We did not think to reach out to any local organizers,” Spriggs-Green said.

“I just want people to know when they drive by that the fight isn’t only happening in the big cities, but also in your local small town,” she added. “Because the racism and police brutality does not only happen in the big cities. And I guess really just to be able to march with my community.”

Jones added, “Today’s march is about revising our system (which) wasn’t created for minorities. Every day we go into the world stereotyped and judged before someone takes the time to get to know us. But if one must judge, it should be by the content of what’s within and not the color of one’s skin. Today is about peace, equality, and justice for all.”

Spriggs-Green acknowledged that she had not heard of any specific incidents of police brutality in Morrow.

“However, the chief of Morrow (Jimmy Callaway) did tell me that he’s had to fire two officers due to use of excessive force,” she said. “He seems to take the matter of police brutality very seriously.”

Callaway said, “We are a state-certified agency. We have banned choke holds and it’s been in our policy for the last 14 years that I’ve been here. We have also always taught deconfliction and have a use of force analysis and review each use of force, and also annually review them.”

Asked what she would say to people who associate Black Lives Matter with looting and violence, Spriggs-Green said, “To the people who assume we are looters and thugs: Materialistic items can be replaced but black lives cannot.”

Spriggs-Green estimates about 50 people will show up for today’s demonstration.

Clayton County Police Chief Kevin Roberts said Saturday that officers would be working the march when it was scheduled to end on Tara Boulevard. Now that the route has changed, Callaway said, it falls within MPD’s jurisdiction.