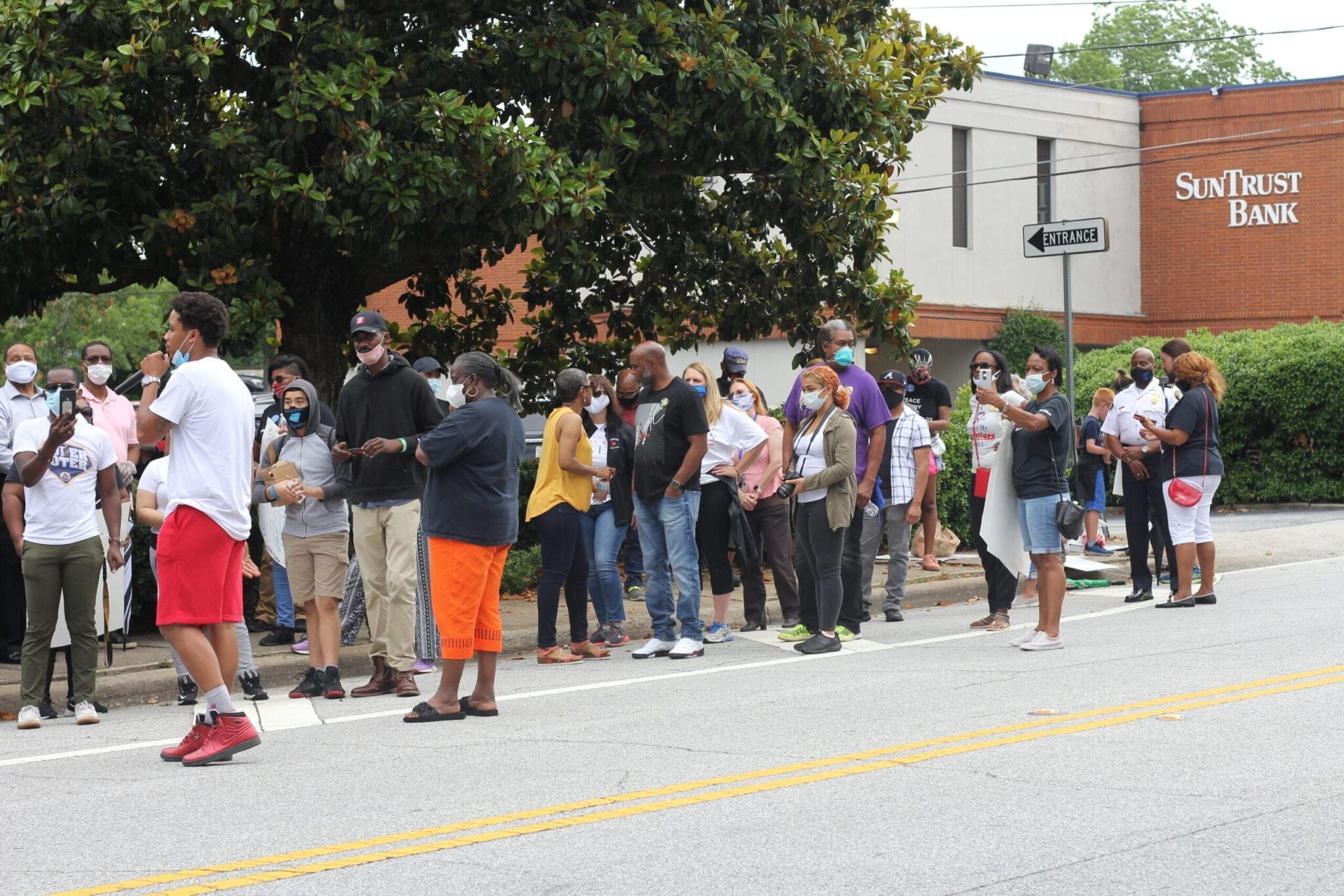 An enthusiastic crowd of 50 to 60 people. many carrying signs, gathered at the Board of Commissioners Headquarters in Jonesboro, then walked to the Historic Courthouse to cast advance ballots and fill out Census forms June 5.

The event, sponsored by the Clayton County Young Democrats, drew elected officials and candidates for office, as well as community leaders and people who just wanted to get others to vote.

“Let’s vote! Time to vote!” people chanted as voters lined up at the Historic Courthouse, where thew Board of elections and Registration had set up a tent and was handing out numbered tickets. As each voter emerged from the side door of the courthouse, the crowd cheered.

Eric Bell of CCYD organized the march, along with H. Drew Andrews of the National Council of Urban League Guilds and Jasmine Bowles of PROOF Inc. (Plans, Resources, and Opportunities for Organized Freedom).

Voters at the Historic Courthouse in Jonesboro Friday, June 5 (more photos to come)

“You wanna talk about voting rights?” CCYD President Alaina Reaves asked the crowd. “We have voting rights in this state. Yeah, there are some folks who are trying to take it away. Y’all! There are still things that we have. We have three weeks of early voting. We have six early voting locations in Clayton County. Some other counties can’t say that. Counties larger than us can’t say that.”

Kevin Sinha, a community organizer with Civic Georgia, said, “Our goal is to make sure that people are able to safely vote, as well as express any pain or emotion that they felt around voting and everything else that’s going on right now in the country, especially with the Black Lives Matter movement. Today is Breonna Taylor’s birthday, so it’s really recognizing the gravity of that, especially.”

Taylor, a Louisville EMT, was shot dead by police who raided her home in a March 13 drug raid. Police allege a third party was using her address as a mail drop. There reportedly is no body camera footage of the raid.

Ensley said, “I think this little march shows that people care. They really care about voting. And we seriously just have to keep moving, step by step.”

Asked how she was feeling about the larger protest movement, Ensley explained, “I grew up in southwest Georgia 77 years ago. I left and went to California. So Moultrie is my hometown. I stayed there till I was 18 years old. And I was treated just like people are treated now. We couldn’t go across the track unless–I guess it was kind of sundown town, because you couldn’t be in a certain place. And I hated that. And I didn’t realize how much I hated that until I think I was in college….I worked in New York, New Hampshire during the summer, and all I saw was white people, and I was the only black.”

She said the white people would ask her questions that she thought were stupid, “but if you don’t know, you don’t know. They had not been around blacks, so they didn’t really know. They wanted to know why the texture of my hair’s the way it is and everything. But not to be ugly. They were really, truly being sincere, I could tell that. But I was still angry.”

The oppression Ensley has experienced for over three quarters of a century “has never stopped. It has always been. The justice system: white, rich. Justice system number two: black, poor.

“I just know in my heart and I know for a fact, this is the era, with this COVID-19? Whatever’s happening, it’s gonna be a good change,” she said.

“We’re gonna have to step up. We’re gonna have to talk to our white counterparts, our white counterparts gotta understand. They’re gonna ask questions. We might think they’re stupid questions but we need to start understanding. Because there’s no way you’re gonna understand what whites feel. Because, you know, we’re black. You know what I’m saying? You can hear us, but you won’t ever know. Because you will never be treated the way we’ve been treated.”

Still, she thinks a change is coming.

“This is what keeps me sane: Everything happens at the right time, in the right space, and in the right sequence. There is no disorder in the universe. Everything is in order. So when it’s time for it to happen, it’s gonna happen.”

For details on voting in Clayton County, visit https://www.claytoncountyga.gov/government/elections-and-registration