March to the Polls denied permit, will march anyway 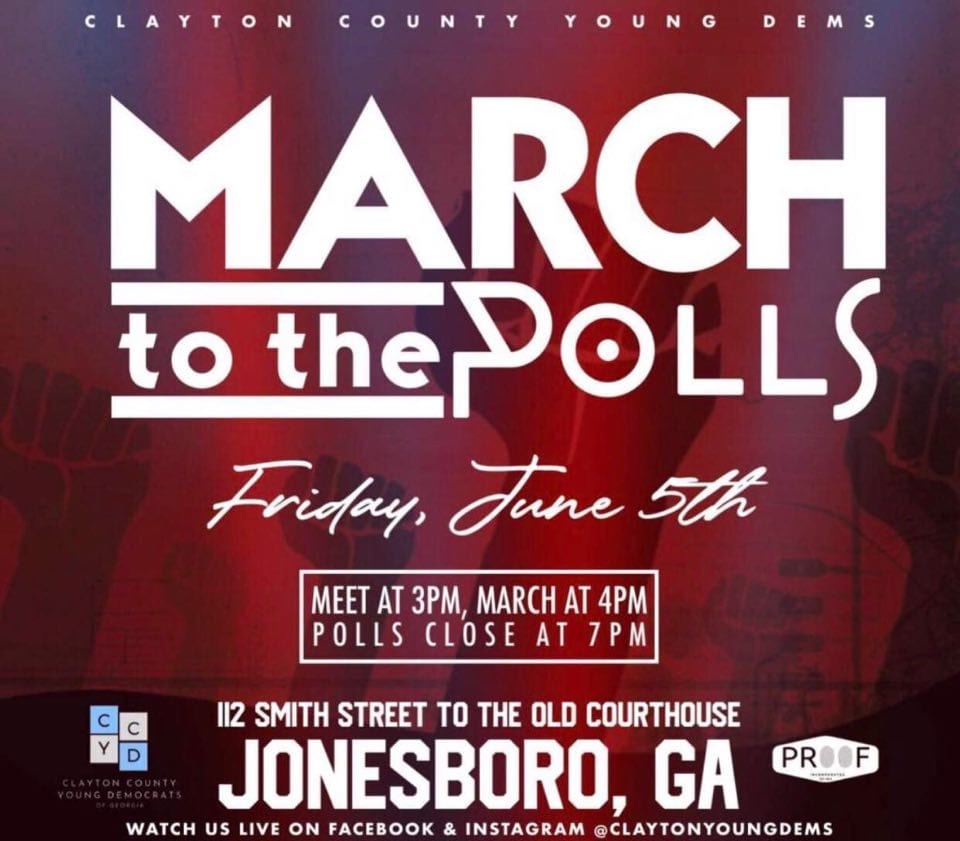 A get-out-the-vote coalition planning a “March to the Polls” on Friday, June 5 says it was denied a permit by the City of Jonesboro, allegedly because city officials expressed concern about “outside agitators” destroying property in the city limits. City officials have not responded to requests for comment. However, Eric Bell of the Clayton County Young Democrats, one of the organizers, said both Mayor Joy Day and City Manager Ricky Clark expressed their support for the march.

H. Drew Andrews, advocacy committee chair for the National Council of Urban League Guilds said, “The Clayton commissioners are on board, but the streets in the area where we plan to march belong to the City of Jonesboro. I’ve reached out to city council members to ask that they, along with the mayor (and) police chief, join us on our march.”

Andrews said Jonesboro officials “are afraid that ‘outside agitators’ will start destroying properties. This is the same city that moved their only polling station from a museum to the police station last year. This is another form of voter suppression.”

The Clayton Crescent asked Day and Clark to confirm whether the city had denied the permit and, if so, why. Neither returned requests for comment.

Clayton County Chairman Jeff Turner said, “If they walk in the roadway, then they would be obstructing traffic and could be charged. A permit would have allowed for the streets to be closed down for walkers utilizing it.”

Andrews said, “My grievance is that this 45-day notice policy to request a permit is an infringement on our Constitutional right to assemble.”

The American Civil Liberties Union notes, “(T)he First Amendment prohibits such an advance notice requirement from being used to prevent rallies or demonstrations that are rapid responses to unforeseeable and recent events. ”

However, legal interpretations of the First Amendment right to peaceably assemble do allow local governments to set basic parameters, such as knowing who is organizing a march and when and where it will take place.

Rallies where people congregate in large groups, use sound systems, and march in the street instead of on the sidewalk may require permits in advance.

In other words, the march can go forward as long as people stay on the sidewalk and don’t block any entrances or exits to private or public property during the approximately two-block route.

“If they are simply taking a stroll to the polls then they wouldn’t need a permit,” said Turner. “If it was going to be an organized rally with speakers then a permit would be needed. Just my two cents’ worth.”

Other groups taking part include the Urban League of Greater Atlanta, Clayton County NAACP, and the Georgia Coalition of the People’s Agenda, which was founded by the late Rev. Joseph E. Lowery.

Marchers will assemble Friday, June 5 at Clayton County Government Headquarters, 112 Smith Street, at 3 p.m., then step off at 4 p.m. to walk to the Historic Courthouse. The old courthouse is home to the county’s Board of Elections and Registration. Voting will be open until 7 p.m.