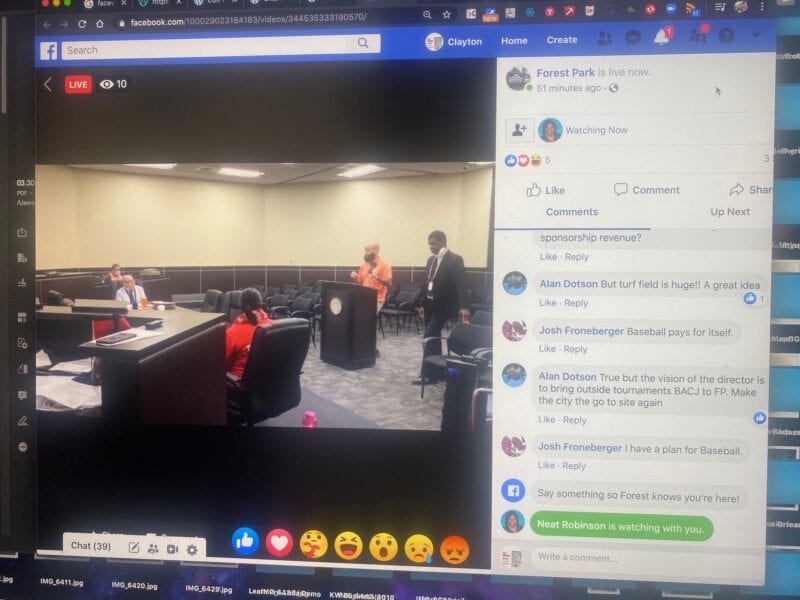 The City of Forest Park is holding a budget meeting on Facebook Live, according to Darquita Williams.

The meeting involves all department heads, who have gathered to discuss the preliminary budget, Williams said.

At 10:36 a.m., Williams said some “miscommunication” about the 9:30 a.m. meeting’s Zoom information involved “whether the meeting was public or not.”

“Honestly, we dropped the ball on that, but we’re going to try and fix it,” Williams told The Clayton Crescent, adding that the Facebook Live stream was “the best we could do.”

Williams said she would forward a copy of the agenda and the draft budget. The Clayton Crescent will post these as soon as we get them.

Here is a copy of the first hour of video that was made available to the public. Highlights include a discussion of why the City Council was not included in Parks and Recreation’s recognition of student athletes, the condition of the men’s room, and whether or not something approved at a “planning commission” meeting held the night before could now be voted on, with City Attorney Mike Williams noting “Our planning commission has some issues”:

The Facebook feed dropped, Darquita Williams said, adding that the city is videorecording the meeting for later replay on the city’s Facebook page.

A second Facebook Live picked up with Planning, Building and Zoning, then the fire department, then Police Chief Nathaniel Clark, who said the city lost around $560,000 because the State Farmers Market decided to go with a private security company instead of an FPPD officer who was posted up at the market for 12 hours a day, Clark also is asking to add a position for a civilian crime scene technician. Clark said this would allow existing sworn officers to go out on patrol.

Clark also said he’s short about 15 or 16 sworn officers, which is down from about 28 when he started last year. He added that the department lost two months of “heavy recruiting” ostensibly due to the COVID-19 emergency. Clark said one new officer was hired May 28 and that several candidates are “in the queue.” He said he hopes to hire more officers within the next 30 days. Clark acknowledged “deep concerns about the way we were policing certain people in the community” and said programs like the Citizens Police Academy, town hall meetings, and ward meetings were crucial to building public trust. He added that the police firing range built a few years ago is “an extremely nice range” but has no running water or restroom. Other agencies have asked to use it but the department has to provide its own range officers for liability reasons. As for vehicles and body cameras, Clark said the department needs to reserve funds to replace vehicles and “we need body cameras bad….we hope and pray we never have an incident like Minnesota here, but we are not immune.”

City Manager Albert Barker said the city is trying to get probation services “in-house” instead of contracted out. Barker’s application for city manager includes no experience as a city manager but does indicate previous stints as a probation supervisor and as regional director of probations and electronic monitoring for Community Correction Corporation. The Clayton Crescent received Barker’s application as sole candidate after filing an Open Records Request with the city.

Baker listed a Fayetteville address and most recently worked for Delta Air Lines as a cargo logistics representative, where he served from February 1999 to the present. Baker’s resume notes he was responsible for managing “international transport logistics for high value cargo, to include vehicles, diamonds and other gems, currency and human remains.”

Prior to that, Barker served as mayor of Camp Arifjan Kuwait/Leesville, managing about 10,000 troops and civilian contractors and an approximately $8 billion budget.

After a lunch break, Economic Development Director Bruce Abraham said his assistant handles the DDA and URA minutes. Mayor Angelyne Butler noted previous meeting minutes have been posted on the board and that a backlog of minutes needs to be approved. When Councilman Hector Gutierrez pointed out that not all minutes had been posted, Butler said he was referring to the now-disbanded Development Authority.

Abraham said the city is “chasing” a million-dollar COVID-19 relief grant to replace pipes from the 1940s at the old headquarters building at Gillem Logistics Center. After that, he said, the city would “probably have an RFP” and an event there.

Butler asked whether some of those funds could be used to add plumbing to the police firing range. Abraham said the federal government requires about $100,000 in “environmental expenses” to bring existing buildings back online. Part of the money would go to bringing Fire Station 3 onto the sewer system instead of the septic tank it currently uses. Abraham said he hopes a developer would remediate the historic building, which requires a $1 million pipe run he hopes the COVID-19 relief grant would cover.

Butler also asked whether anyone had looked into the next Main Street Program application cycle. Abraham said no because the area has 29 older properties that need to be rehabilitated. The city did get a Livable Cities Initiative grant, he said.

A 150,000 square-foot fiber optic project with 150 jobs at Gillem, as well as two Main Street prospects, have fallen to the COVID-19 emergency, Abraham said. A hydroponics project from Florida is moving forward, however.

Abraham added that he hopes to put together a Community Improvement District for Main Street businesses, and that the city has asked the Development Authority for 50 $2,000 grants to local small businesses. A letter and application will be sent to the 500 business license holders in the city. However, there are limitations on what the money can be used for, such as rehiring employees.

Public Works Interim Director Bobby Jinks said his department has frozen three vacant positions on the street plus one trade specialist position that the department has not been able to fill. The department has six vacancies and two part-time employees. He told Akins-Wells the signs division and small tools answer to the director and deputy director as of today. Five years ago, it used to be under the streets division.” Jinks said he had been over the sign shop until that switch was made.

During the Finance Department’s presentation, Barker said his goal for the city is “to write one grant a week.”