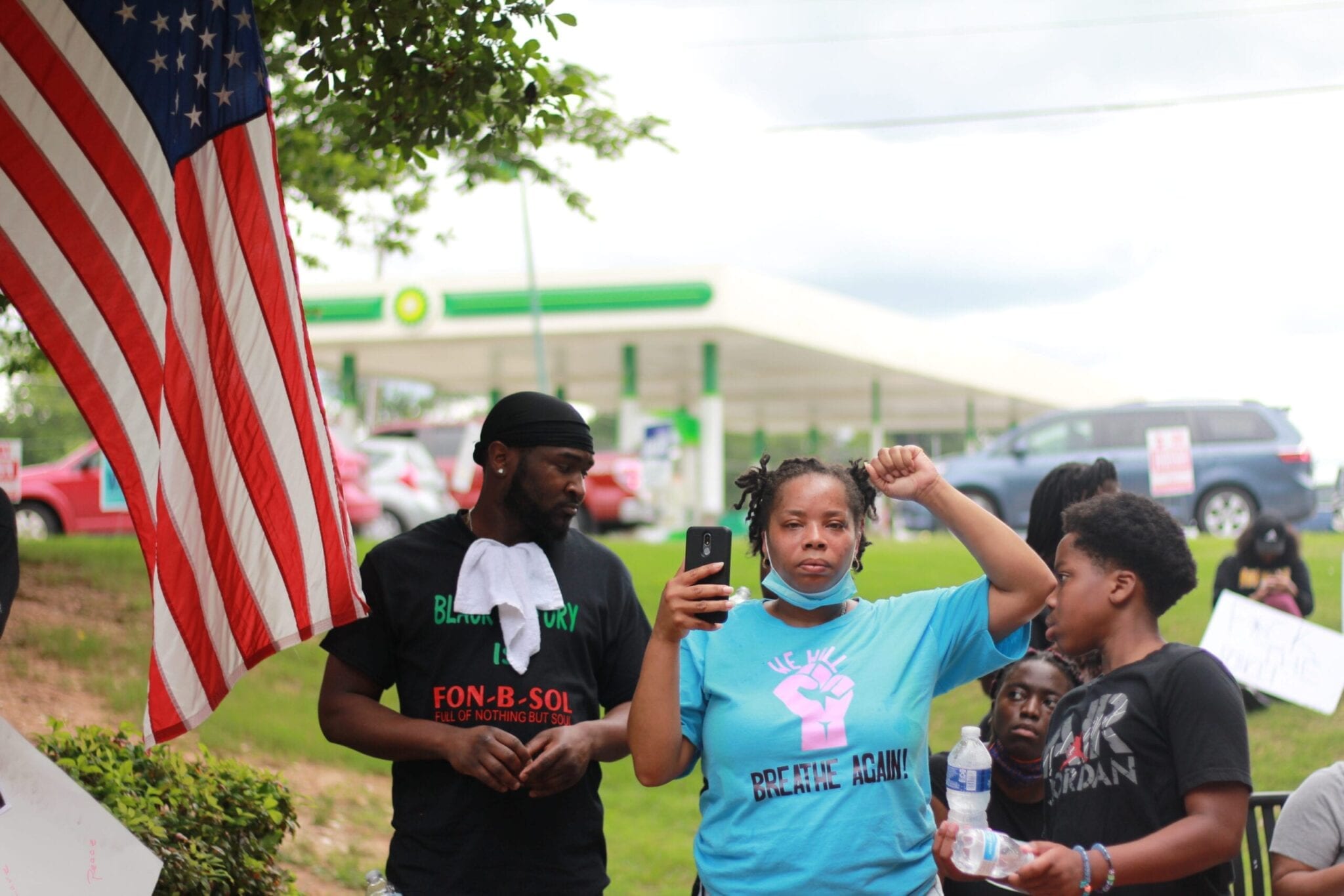 On Thursday, it was just an idea.

On Sunday, it was the largest demonstration Clayton County has seen so far in the response to George Floyd’s killing at the hands of Minneapolis police.

A diverse crowd, many of whom said they lived in Clayton County and were glad to see a protest here, met up in the parking lot of Southlake Mall, then marched up Jonesboro Road, carrying signs and chanting.

Numerous cars beeped enthusiastically, with some drivers and passengers raising their fists to salute the marchers, who responded in kind.

Alicia Jones, who lives in Conley, attends Clayton State University, and who, along with Lanique Spriggs-Green of Oglethorpe University, organized the march, said, “The purpose in today is to bring more awareness, more justice, more peace, and more equality to our country, our nation. This is our home and everybody deserves a fair chance in life, everybody deserves a free hand in life, to give them the opportunities that they deserve. I just hope that we can all come together and do some good for our community and bring peace to our futures.”

“I actually was on my way to the grocery store, but the good Lord told me to go up Tara Boulevard, so that’s why I came,” one woman said.

Mall security politely asked the marchers to move over one parking lot and Morrow Police were visible but there were no conflicts between police and marchers.

“Good luck with what y’all are doing,” the security guard said.

Community organizer Timothy Kenney said, “I’m very proud of these young folks, these young millennials that are getting out here and walking for justice. I am very proud of them…I’m out here in support of them because it’s a great thing, you know, with marches all across the land right now. After this, things gonna change.”

Clayton County Board of Commissioners candidate Timothy Vondell Jefferson, who is running in District 3, said, “I think that it’s a very, very proactive move, as long as it stays peaceful. We have got to send a message to the authorities that we gotta be fair and balanced as we engage and interact on a daily basis within the United States of America, so I think that it’s critically important.”

Michael Owens, who is running for Congress in U.S. House District 13, said, “I think it’s another one of many marches that should happen and should continue to happen. Talking about peaceful protesting, I think that it’s something we should have and I would be happy to see it continue to happen until we have some real change.”

Dwayne Fabian, who is running for Clayton County Sheriff as a write-in candidate in the November 3 runoff, said, “I’m out here with the Black Lives Matter movement just to show cause that black lives do matter. Doesn’t matter what you do wrong. Your life does matter. And I’m out here to support the crowd. It’s really very diverse. We have a lot of ethnicities out here, and so it shows that everybody’s trying to move in one organization to make something that’s better for everyone. And so therefore, by me being out here, it shows I’m gonna give my support into the movement.”

Marchers explained why they came out.

A woman named Mary said, “I have a husband, a son, you know, everything going on, I wanted to try to do what I can besides just online and talking to people. I wanted to get out here and show my son–you know, be an example.” Mary’s son, Maddox, is four. “He’s the biggest inspiration why I’m here today.”

Ashante Henry said she came out with her cousins. “We want to make a difference. We want to speak up, you know? We come from a family, we’re a very close-knit family. We have sons, we have daughters, we have fathers, we have cousins and uncles, and we know that they haven’t been treated fairly by the system and that it’s just gone on way too long. This is our time as young millennials, I guess if you want to call us, to stand up and really make a difference.”

Jose, who just moved to Clayton County a week and a half ago from El Paso, TX, said he came out as “just a part of the community, you know. We’re all one people so I’m doing the right thing….I just love it.”

Vonna is a teacher who lives in McDonough. “We believe black lives matter, and I’m a teacher in Henry County, and I have a four-year-old and a two-year-old and a black husband, so we’re very prominent in the protests.” She held her son, Vance, who was wearing a Batman suit.

Roslyn Williams, who works with Owens’ campaign, told the crowd she got involved with politics just five years ago.

“As somebody that comes from Philadelphia, Pennsylvania, never getting involved, never voting, just didn’t really care about the elections because I did not think the two matched,” she said. “But I wanna say something. Just now what was ringing out of my head was “Black Lives Matter.” And do y’all know that by law, black lives don’t matter? Because there are policies and laws that are out there that justify the killing of our black brothers and our black sisters. So the only way true change is really gonna change is if all of you that are out here today, I pray that you are registered to vote. I pray that you are registered to vote, and not just registering to vote and going to the polls and voting for whoever they told you to vote for. But I pray that you are registered to vote, and that you yourself will go to the place and that you will investigate these people that we are putting in office.”

Williams added that last week was the first time she ever asked, “Lord, am I gonna make it back home today?”

The organizers made it clear that the group did not have a permit to march and therefore needed to stay on the sidewalk and not block street traffic or intersections. On arrival, people would also have a chance to tell the crowd about any police encounters they’d had or anything that was on their minds. “We are using our voices for good,” Jones said.

With that, the group stepped off across the hot asphalt, clutching ice pops, bottled water, and signs.

As the marchers passed the Harley-Davidson store, Dejah and Tyler stood smiling and shooting cellphone video. They live in Atlanta and had stopped to charge their car.

Tyler added, “I’m from Clayton County originally, so it’s real good to see the outpouring of everybody.”

The crowd chanted, “Hands up! Don’t shoot!” as marchers made their way across I-75 and drivers honked their horns in support. An 18-wheeler parked near City Hall blew a long blast on his horn as the marchers passed. Again and again, people blew horns, raised fists, took cell phone video, and waved at the marchers.

Many more photos and multimedia to come soon.